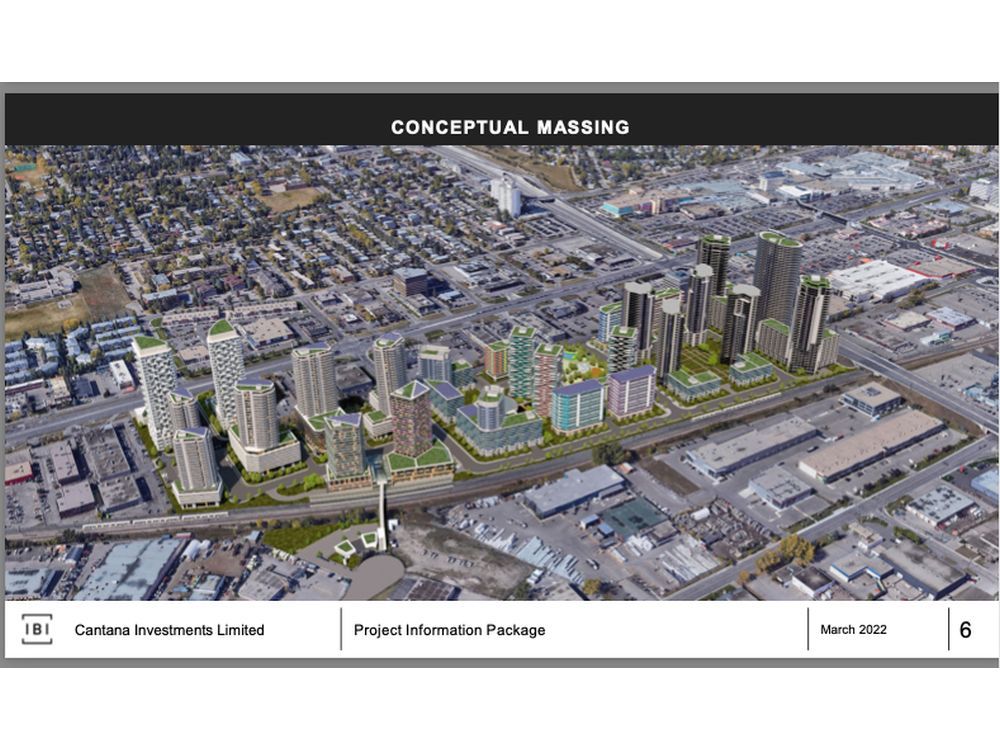 Next up is Midtown Station, a 35-acre transformation of 1970s office, industrial, showroom, warehouse and retail buildings in Fisher Park (between 73rd Avenue S.E. and Glenmore Trail, and Fisher Street and the LRT/CPR railway tracks) into a mixed-use urban village, with a new LRT station, kitty corner to Chinook Centre.

This is a mega project replaces 500,000 square feet of low-rise buildings with about 6.5 million square feet of new mid- and high-rise residential, office, commercial, hotel and hospitality buildings that will increase the city’s property tax revenue from the site by 30-fold when completed in 30-plus years.

You would think the City of Calgary would be embracing this proposed project, but for some reason it is dragging its feet. The developer, Cantana Investments, made application for this development in 2018, but four years later it is still negotiating with city planners to get their approval before going to planning commission and council.

The Midtown Station master plans includes 27 buildings ranging in height from three to 42 storeys, incorporating a mix of residential, office, hotel, retail, restaurant, fitness, professional and other commercial uses, employing about 2,000 people. The new community will be home to about 11,000 people living in 5,000-plus new multi-family homes and 600 townhomes.

The scale of this project is on par with East Village and is being totally funded by Cantana Investments — including the LRT station and pedestrian bridge over the CPR tracks to link Midtown with Fairview, its sister neighbour.

The plan calls for a fully integrated station (a first in Calgary) — walk off the train into an enclosed space with retail, professional services, health and wellness amenities and a 24,000-square-foot community space at the base of two 20-plus-storey residential towers.

The plan also calls for bike lanes and an internal pedestrian street. A design charrette with Fairview community members produced a 1.5-acre public space that includes a dog park, toboggan hill, sports court, playground, tot lot and skate park. Who could ask for anything more?

Many large cities have a midtown hub located at the intersection of major roadways and transit lines a short distance from their downtown. Toronto’s Midtown is at Young Street and Eglington Avenue about seven kilometres from City Hall, ironically the proposed Midtown Station development is seven kilometres from our City Hall. In New York City, Midtown Manhattan is home to some of the city’s most prominent buildings — Empire State Building, Chrysler Building, Hudson Yards redevelopment, Rockefeller Center and tourist destinations like Broadway and Times Square.

The intersection of Glenmore and Macleod trails is the natural location for a high-density midtown hub and a logical evolution of Calgary’s inner-city. They are obvious synergy between Midtown’s mix of residential and employment buildings and Chinook Centre’s retail and entertainment focus.

Surprisingly, it seems like the biggest challenge facing the developer is getting the City of Calgary’s approval for the Midtown project. The application for this development was made in 2018 and, four years later, city planners are still hesitant to approve the project even though it fits with the Municipal Development Plan. The plan’s policies state that rather than continuing to grow outwards, 33 per cent of Calgary’s future population growth will be within the existing developed area by 2039, and 50 per cent will be accommodated within the developed area over the next 60 years.

Unfortunately, it doesn’t fit with the city’s current policy for the redevelopment in the area because it wasn’t included in the city’s Chinook Station Area Redevelopment Plan. Yes, it would be ideal if the land immediately next to the Chinook Station could be developed in a comprehensive way like the Midtown Station proposal, but that land ownership is too fragmented for that to happen anytime soon — if ever. If this proposal was next to Chinook Station, I expect it would have been approved quickly.

If the city is serious about wanting more inner-city residential growth, it has be able to respond to unexpected and innovative proposals by landowners and developers and not let prescriptive policies and plans prevent infill developments that ultimately fulfil its MDP. Remember, the MDP’s goal is to have 50 per cent of the city’s future residential growth happening in established neighbourhoods, and especially sites that encourage transit use. This is exactly what Cantana Investments has done with the proposed Midtown Station application.

FYI: The Fairview community is also on side with the development (I recently met with members of the community’s board, who told me the developer has been great to work with), with their only reservation being will the LRT station result in increased crime and safety issues in their community, especially with a playground in a park nearby? The City of Calgary has a huge issue with LRT safety (both on the trains and in the neighbourhoods next to stations) that must address immediately, but that is another issue.

Just in case you were wondering — storm water and sanitary studies have been done and signed off by city departments indicating there is lots of existing capacity for this project and other growth forecasted in the catchment area for at least the next 15 years.

Kudos to Cantana Investments which has spent 10-plus years assembling the land for the ambitious Midtown Station application, millions in developing the master plan and been a good neighbour in working with the Fairview community.

In my opinion, this is a unique opportunity for Calgary to continue its evolution from being primarily a suburban, low-density city, to a more urban, mixed-use, mixed-density city that is less car-focused.

The problem with urban planning and plans is that urban redevelopment and city building is organic — unexpected opportunities can pop up anywhere. Calgary needs a robust urban planning culture that can link vision to reality, that can quickly adapt to new proposals that don’t exactly fit within their existing plans.