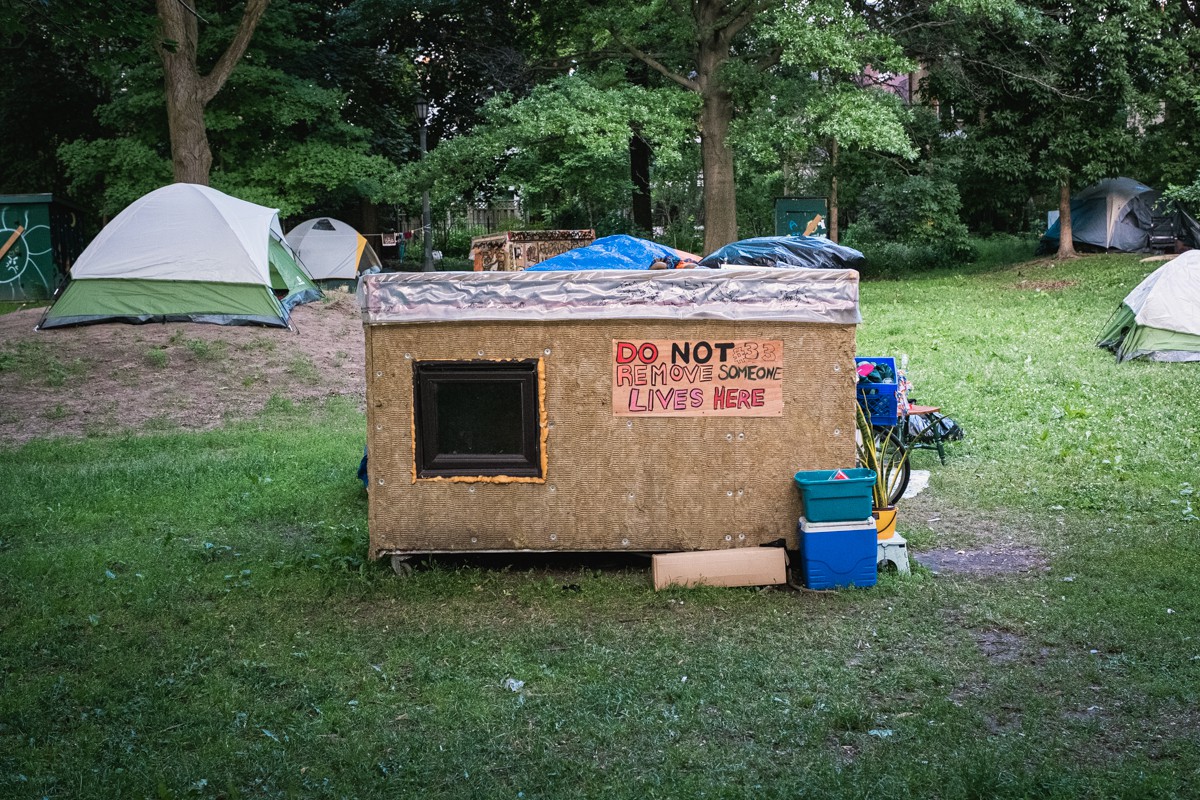 At the end of the third wave of COVID-19, the City of Toronto forcibly evicted about 30 unhoused people from Trinity Bellwoods Park. Videos from that day show police using pepper spray on supporters who showed up to protect their unhoused neighbours. New documents obtained through Freedom of Information requests show that in order to legitimize the violent evictions, City staff worked to control the media narrative around encampments, pre-determining media exclusion zones and inflating fire safety concerns in press releases.

Early in the morning on June 22, 2021, people living in and around Trinity Bellwoods Park noticed a temporary fence being erected around large areas of the park. The public would later find out that this fencing cost $139,109, while the private security and police protecting it added another $305,711. The fence was the physical enforcement of an exclusion zone, an area where police block public access – in this case, separating encampment residents from their supporters. And while members of the media are sometimes allowed inside exclusion zones (albeit with a police escort) to document what’s happening, at least five journalists say they were prevented from entering the exclusion zone that day.

Willms suspects his arrest was intended to “scare other journalists from crossing that fence.”

In an email to us, the City said it put up the fence “to ensure the safety of all.” Photojournalist Ian Willms has a different take: “I was prevented from doing my job, [which] I’m sure was the intention.” Willms got to the park around 11:30 a.m. to document the eviction. He asked police multiple times to allow him to enter the exclusion zone, but they denied him entry. At 1:30 p.m., frustrated that he couldn’t see much of what was happening, he recalls, “I went to another area of the fence, and I just climbed over it” in plain view of the police. Willms says he “was immediately grabbed and handcuffed” then driven around the city by Toronto police officers for hours.

By the end of the day, several more people were arrested or detained, including two encampment residents. Many others were battered and bruised by the police.

Willms wouldn’t see or document any of this because, after being held by police, he was dropped far from the park and told he would be rearrested if he returned. Willms suspects his arrest was intended to “scare other journalists from crossing that fence.”

The media exclusion zone that Willms was arrested while trying to enter was part of the City’s eviction operational plan. We obtained that operational plan through a series of Freedom of Information requests conducted by a network of activists we are part of. The plan acknowledges that the media is “an essential service,” but it fails to mention the Charter right of freedom of the press. It states explicitly that “Corporate Security and Toronto Police Service must not allow media in the fenced area.”

Unlike other media exclusion zones, which appear to be initiated by police forces themselves, the one at Trinity Bellwoods was drafted by City of Toronto staff: Deputy City Manager Tracey Cook signed the plan. Jolly expresses concern about such a decision being made by people who are “unelected and largely unaccountable to any kind of electoral democratic practice.”

It states explicitly that “Corporate Security and Toronto Police Service must not allow media in the fenced area.”

The exclusion zone wasn’t the first attempt by City staff to control media coverage of encampments. In the months leading up to the Trinity Bellwoods evictions, the City used encampment fires – both their existence and their possibility – to justify evicting encampment residents.

Over the preceding winter, the City repeatedly cited the safety risk posed by fires as a primary rationale for its campaign against wooden shelters in parks. On the day of the Trinity Bellwoods eviction, a City press release (like six others before it in 2021) said, “In 2020, Toronto Fire Services responded to 253 fires in encampments.” Nearly every press release about encampments also stated that there had been an increase in the number of encampment fires in 2021.

“There’s this fear that’s connected to fires,” says Lorraine Lam, a front-line worker at the Toronto homeless outreach organization Sanctuary and a member of the Shelter & Housing Justice Network steering committee (a committee one of the authors, A.J., also sits on). She says people worry “it might bring everything in the neighbourhood down.”

But the story is not so simple. A “fire event” is not always a fire.

Toronto Fire Services (TFS) deputy fire chief Tony Bavota explained this to Toronto City Council on June 8, 2021. Bavota clarified that of the TFS’s 253 “encampment fire responses,” only 132 were to “uncontrolled fires.” In the other 121 instances, he said, “when our fire crews arrived, the fires were not in an uncontrolled state.” And some of these 121 “fire events” involved no fire at all.

Inflating the number of fires in encampments has deadly consequences. Lam says it “drives a fear-based perception of people who are homeless and living in encampments.”

In addition to fires, fire events also include “Pre-Fire Conditions” and “False Alarms.” “Pre-Fire Conditions” can include lightning, fireworks, a pot on a stove, or cooking involving steam or smoke without the presence of fire. In other words, the system logged 253 fire events in 2020, which simply reflects the number of times TFS showed up to encampments, not the actual number of fires requiring suppression.

With respect to controlled fires, these were often life-sustaining fires that encampment residents relied on for cooking and warmth. Residents have repeatedly complained that they were harassed by TFS for these fires. Following the 2015 death of Grant Faulkner, an unhoused person who died after his wooden shed caught fire on a -20°C night in Scarborough, a Coroner’s Inquest jury recommended that the TFS provide fire safety tips for unhoused people. The City of Toronto has adopted a zero-tolerance approach to fires instead. To try to fill the gap, community members have offered training, fire extinguishers, and fire blankets to encampment residents.

We asked the City via email why it conflated fires and fire events in its multiple press releases and public statements about encampments. City spokesperson Brad Ross said, “None of the fires cited by the City […] were permitted fires.” Neither Ross nor the TFS responded to explain how a fire permit is relevant to something that isn’t a fire.

Leading up to the Trinity Bellwoods eviction, every major media outlet in Toronto reported on the City’s encampment fire data as unquestioned fact. Journalists from the Toronto Star and CityNews even cut and pasted wording directly from City of Toronto press releases without attributing it to the City. This was despite the availability of fact-checking resources provided by FactCheck Toronto (an organization one of the authors, A.J., is a member of) that broke down City data to show that the number of fires that required suppression by TFS was about half of the number of fires the City was publicizing.

To a certain extent, it makes sense that the media would conflate fires and fire events, because that’s the information they were provided from the City. However, Jolly says journalists are increasingly being challenged to ask themselves, “Are you allowed to report what they are saying is fact because of the traditional notion that they’re an authoritative source?” So far, it would seem, Toronto’s media hasn’t reconciled this industry debate with the realities of its municipal government.

One journalist duo bucked the trend and questioned the City about the fire data: the Toronto Star’s Victoria Gibson and Jennifer Pagliaro. They reported that, of the nine fire events leading up to the Trinity Bellwoods eviction, three were “controlled,” and six were “uncontrolled” – reducing the threat of uncontrolled encampment fires by a third. The Toronto Star‘s public editor told us that Gibson had reached out to the City for additional details about the fires prior to publishing the article in the Star.

Asking the City to break down their fire data is the kind of due diligence that Jolly calls the “gumshoe shoe-leather work that journalists have to do” to confirm every fact they report on.

Even with Gibson’s extra effort to get the information about these nine fires right, Freedom of Information documents we obtained show that one of the “controlled fires” wasn’t a fire – it was a “perceived emergency,” a “false fire call.” Because the City chose not to publicize this false alarm, the controlled/uncontrolled fire binary remained unchallenged. Non-fires could remain fires in City press releases and in the public’s mind.

The central issue is the fact that “a bunch of people who had a relatively safe and stable place to live […] were being forced out and their possessions were being destroyed – effectively being terrorized.”

Inflating the number of fires in encampments has deadly consequences. Lam says it “drives a fear-based perception of people who are homeless and living in encampments.”

“It adds to this larger conversation of vilifying people who are living outside because of policy failures,” scapegoating individuals instead of rightfully blaming Toronto’s “terrible housing policy,” Lam adds.

Willms agrees, saying that his arrest – like the encampment fires – worked as a distraction. The central issue is the fact that “a bunch of people who had a relatively safe and stable place to live […] were being forced out and their possessions were being destroyed – effectively being terrorized.” He adds that we need to “keep our eyes firmly fixed on the issue at hand.”

Lam, meanwhile, is braced for more evictions this spring and summer.

The City of Toronto has chosen to appease property owners in wealthy areas like those around Trinity Bellwoods by criminalizing unhoused people – forcing them into invisibility while pushing a false narrative that these efforts will somehow make unhoused people safer. The real solution to the crisis is creating deeply affordable housing, a measure that the City seems to think is too pricey. But inaction comes at an even higher cost. In 2021, an average of 4.2 unhoused people are dying each week in Toronto – an increase from 2.8 people per week in 2020.

With files from Melissa Goldstein.