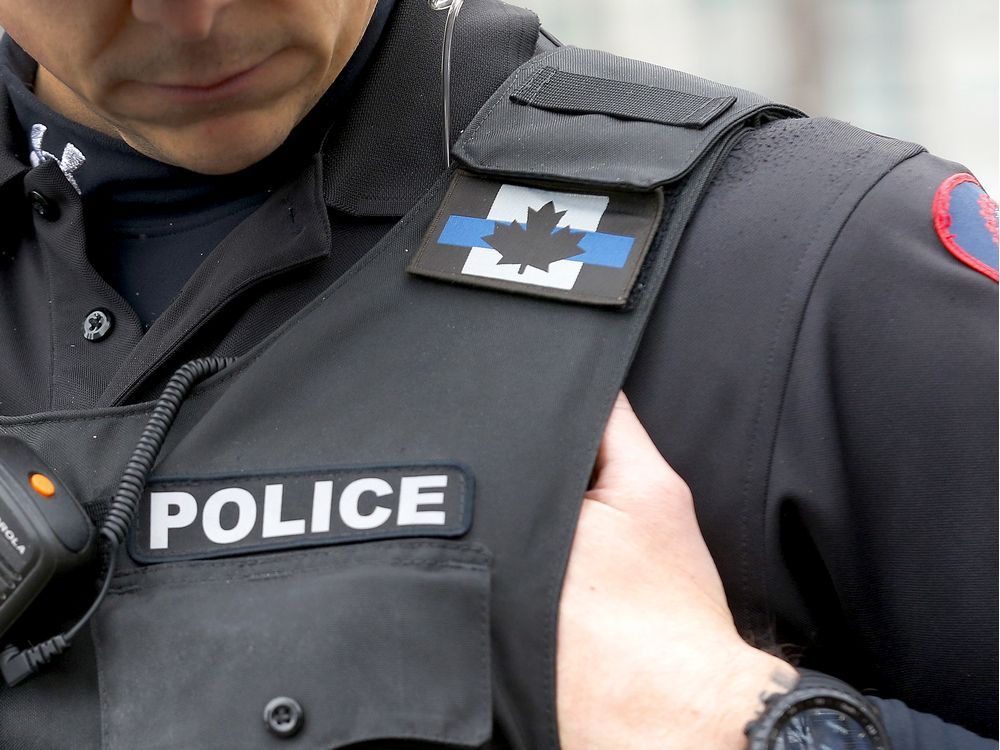 The thin blue line patch causing controversy among the Calgary Police Service and its oversight body has a long and complicated history, appearing in various iterations at different times of policing over the past century.

The image features a blue line across a background, often a black and white flag for the country it appears in. The Calgary police commission recently issued a directive for officers to no longer wear the symbol on their uniforms citing negative perceptions of it, particularly among marginalized communities. In response, the Calgary Police Association said its members would not oblige.

Association president John Orr said at a recent commission meeting that the symbol represents support for fallen officers and others on the job. Police Chief Mark Neufeld has acknowledged the symbol’s meaning and has said he recognizes it will be difficult for members to remove it.

The commission has referred to a CPA survey that found as many as one in four Calgarian respondents would view the line negatively despite only five per cent of respondents saying they knew what the symbol represented. They said other Canadian police services have already banned the symbol.

Officers were originally given until the end of March to remove their patches, but Neufeld extended that deadline to April 18. This week, the police service announced officers would not be reprimanded while conversations around the symbol were ongoing.

The thin blue line has origins tracing back to the 1800s, when British soldiers adopted a thin red line during the Crimean War referring to a red line of soldiers on the battlefield. It is unclear when exactly the phrase was adopted by police units but in 1923, the term thin blue line was used by New York police commissioner Bill Enright when referring to a stretched police force. Several decades later, Los Angeles police Chief William Parker used the phrase many times in the 1950s. At the time, it was also used as the title of an LAPD promotional TV series.

Parker turned the LAPD from a scandal-ridden department into a militaristic-style service where, according to a 2015 L.A. Times article, officers began proactive policing by harassing those they deemed to be suspicious, usually Black and Latino young men. Parker himself made a number of racist comments against these communities while chief.

Doug King, a criminal justice expert at Mount Royal University, said the thin blue line can be directly linked to Parker and the Watts riots.

“It didn’t start under the Black Lives Matter movement and it didn’t start as a symbol of respect for fallen officers. The history of the thin blue line goes back to the Watts riots in 1965,” said King. “The then police chief in Los Angeles, when Watts was burning, formed a blue line perimeter around Watts and prevented fire trucks from going in to put the fire out, and Watts is a predominantly Black community.”

King said senior officers need to understand the racial tensions in the history of the phrase and question if that matters to them.

Kelly Sundberg, with MRU’s department of economics, justice and policy studies, said that while the term “thin blue line” was used by leaders of the NYPD and LAPD, the current movement and symbol were not. He said today’s image is linked to a charitable foundation in the United Kingdom with the same name that was created in response to the murders of several officers in that country.

“There is a crystal clear connection between the thin blue line U.K. movement and memorializing murdered police officers,” said Sundberg.

The thin blue line has since been used by a number of groups in the United States, including at the Unite the Right white supremacist rally in Charlottesville, Va., in 2017.

Sundberg said the symbol has been co-opted by other groups in the United States, but that it isn’t fair to say Calgary police officers are wearing it with negative intentions. He pointed to the Canadian flag recently being used at anti-vaccine protests as a form of a symbol being taken and used for unrelated purposes.

“Symbols do get hijacked by other groups without the consent of the originators of the community that developed. This in itself should not be the justification to cancel a flag,” said Sundberg.

Adora Nwofor, president of Black Lives Matter YYC, said she viewed the symbol as hate speech given the history of policing in Canada being used against minority communities.

“The reason why the thin blue line is negative, is because when police are actually engaging with people who they have more power over, because of society, they are rubbing it in our faces,” said Nwofor. “They don’t even understand the history of it or what it represents, what it represents to people outside of the police, that’s really the problem with it.”

She questioned what other rules the police association is telling its members to disobey if they are fighting back over the wearing of patches.

“If you can’t hear us about your pretty little decal on your chest, how are you going to hear us about getting murdered? How do you hear about Black is a capital B. You can’t do the smallest thing to give us safety, never mind comfort.”

Sean Hadley, president of The Thin Blue Line Canada online store, said he does not view the thin blue line as a divisive symbol. He said that it was created to honour fallen soldiers and represent the line between life and death that officers walk on the job. However, he acknowledged some far-right and racist groups have co-opted the symbol for their own cause in the past and said those people need to be called out.

“I’ll call anyone out who’s using it, you know, in that sort of manner,” said Hadley. “The people who are against, I don’t think they really know the meaning and they’ve listened to maybe a few articles. It’s kind of a small minority of people who say it’s racist.”

In Calgary, King said officers should choose not to wear the symbol regardless of their intentions in doing so, as it clearly upsets portions of the community.

“It’s a pillar of community policing, for God’s sake, that you listen to all members of the community and don’t say, OK, you guys don’t know what you’re talking about, the 25 per cent are offended by it. To me that’s beyond the pale,” said King.

Sundberg agreed, saying that whether officers agreed with the directive or not, they need to listen to the commission.

“That’s how our system works — elected officials make the laws, police enforce the laws and the courts decide if the laws are in fact lawful,” said Sundberg. “Police associations have a right to protest the decision, but must nevertheless follow it.”

Both King and Sundberg said those overseeing the police must also respect the rank and file.

King said morale within the Calgary Police Service has been declining during the terms of the past several police chiefs and the thin blue line directive is a catalyst for that coming to the forefront.

“It’s an issue of communication between senior officers and rank and file. But, it’s also a symptom of the officers who don’t value as highly the leadership within the police organization as they once did,” said King.

Chief Neufeld said he believes officers will eventually remove their patches once some of those issues are addressed. He said he wants to provide officers with as many opportunities as possible to voluntarily comply before any enforcement or discipline is taken.

The police association did not respond to requests for comment. The police commission declined requests to comment further on the directive.