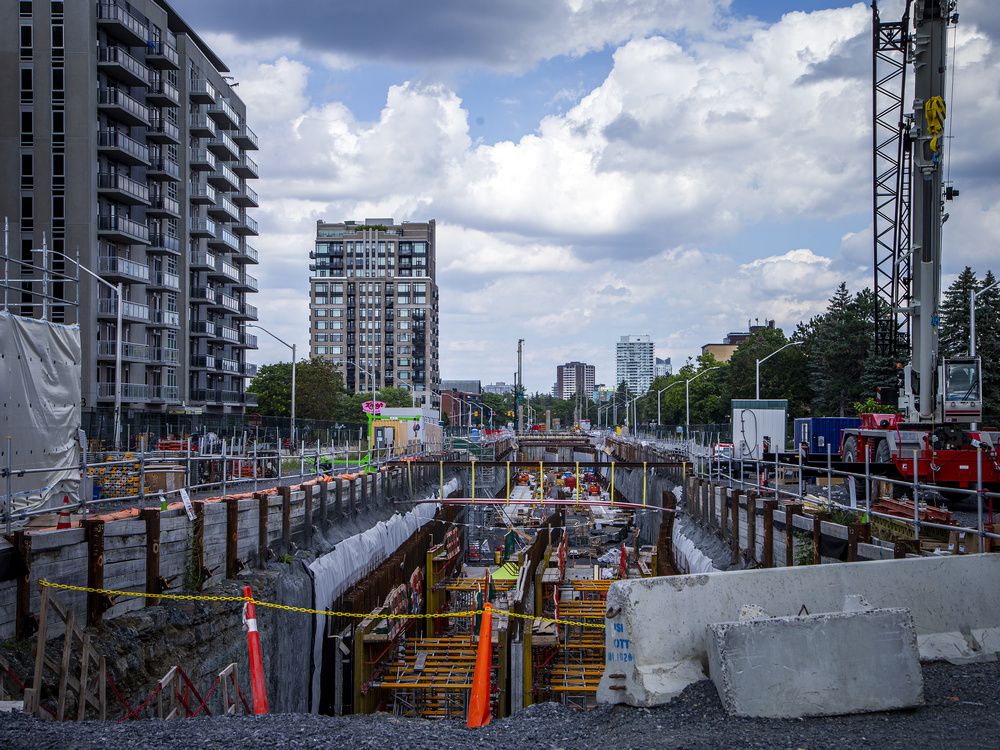 The forked western LRT expansion is now delayed up to a year, but additional hurdles could continue impacting the original schedule for delivering the Stage 2 project.

A quarterly O-Train project update to council revealed the city’s latest assessment of the project extending LRT to Algonquin College and Moodie Drive.

“The City is working closely with East West Connectors (EWC) to maintain the Confederation Line extension schedule,” according to Michael Morgan, the city’s rail construction director, who sent the update to council on Friday.

“The project is on the original timeline in the east for handover in May 2024 but there are significant schedule pressures on the western segment of up to a year. Potential impacts from labour strikes, supply issues and other events in 2022 are still under review.”

The western leg, which includes two cut-and-cover tunnels, is under contract to be finished by May 2025.

In recent months, the city had been predicting there could be a delay to the western project in the range of three months. Staff had been working with EWC, a partnership of Kiewit and Vinci Group, to review the schedule.

The western extension could be the most technically delicate part of the $4.6-billion, three-direction Stage 2 project.

Part of the western LRT leg involves a tunnel roughly between Dominion Station (to be renamed Kìchì Sìbì Station) and Lincoln Fields Station. A shorter tunnel will run between Connaught Park and Queensview Station.

The city has said construction of the longer, three-kilometre tunnel met early challenges with the discovery of deeper clays, but it wasn’t characterized as a technical problem.

When it comes to labour challenges, many construction workers in the city, including crane operators and road builders, were on strike earlier this year while they settled contract disputes.

On the other side of the city, EWC has managed to keep the eastern extension to Trim Road aligned with the contracted November 2024 completion target.

SNC-Lavalin, under its project name TransitNEXT, has the expansion contract for the north-south Trillium Line. The leg was originally contracted to be completed in August 2022, but the city has been warning council about a delay into 2023.

Morgan’s update to council on Friday said the Trillium Line is on track to be finished in summer 2023, but he noted the same construction variables as the Confederation Line, including labour and supply issues, that could impact the schedule.

Some good news for the Trillium Line project is all seven of the new Stadler trains have arrived in Ottawa and retrofits to the existing Alstom LINT trains are complete.

As Stage 2 contractors work on their projects and the city makes payments to the companies, there are still outstanding financial issues on Stage 1.

The federal and Ontario governments are each holding back $60 million while a third-party audit is being completed on Stage 1. Each of the upper governments committed up to $600 million for the $2.2-billion Stage 1 project, which is also the subject of a provincial inquiry.

Morgan’s update to council said no money has been held back from the upper governments on Stage 2.