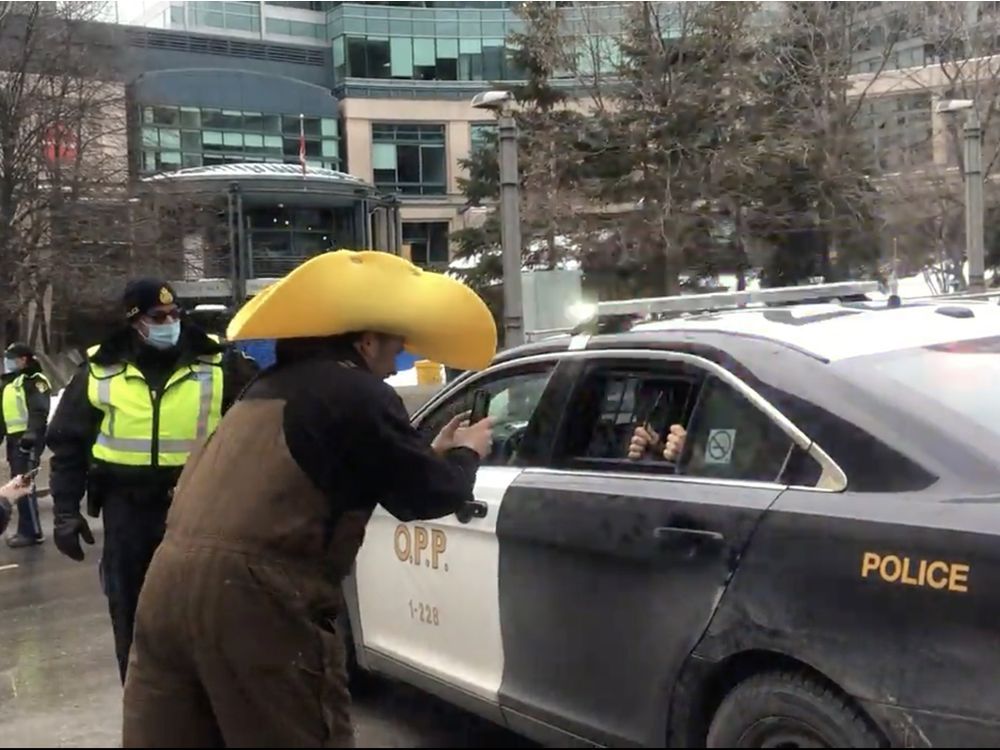 An OPP officer was using his marked cruiser like a “carnival ride” for demonstrators as he worked in the downtown Ottawa protest zone, according to a man who recorded it on Thursday.

The man who recorded the video said he’s a 40-year-old lawyer who lives “within earshot” of Kent Street. He was concerned for his safety by sharing and talking about the video and was granted anonymity for this story.

The video shows the officer allowing people into the back of his cruiser. One man with an oversized yellow hat gets out, and then another man gets in to pose for pictures as he grabbed onto the window bars.

“I hope they’re not honking at me thinking I’ve arrested you or something,” the officer is heard saying after a horn blast in the distance.

The lawyer who recorded the video said he was getting a coffee over the lunch break when around 1 p.m. he came upon the interaction outside of the World Exchange Plaza at Metcalfe Street. He was within about 10 metres of the interaction.

“I saw these people walk up to the police officer. I wanted to see how he reacts, given that police said they were going to address this situation,” the lawyer said.

“I thought they might joke around. To my shock and consternation, I saw him using his police cruiser like a carnival ride to take pictures. I thought, this has to be filmed.”

The lawyer said the officer seemed to know the interaction was being recorded, but the officer, or the folks who were taking turns sitting in the cruiser, didn’t say anything about it.

“I couldn’t believe that law enforcement in such a situation would treat it so cavalierly,” the lawyer said.

This newspaper reached out to the OPP for comment but none had been provided by deadline.

The Ottawa Police Service, the incident commander for the protest, was also offered opportunity to comment. There was no response by deadline.

Police have been criticized for their soft approach to the protest occupation, but Ottawa Police Chief Peter Sloly has defended officers’ work under stretched resources. “There is no reluctance to be involved in enforcement efforts,” Sloly said Thursday during a press briefing.

Police call the ongoing protest an “unlawful demonstration.” On Thursday, the message from law enforcement to protesters continued to be, “Go home.”