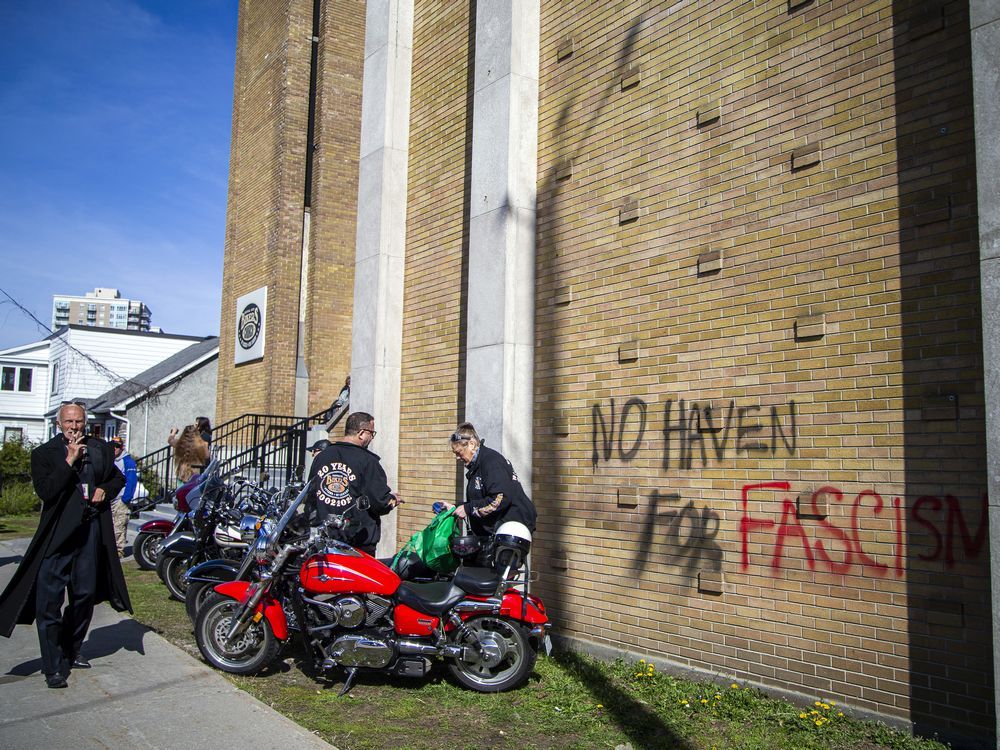 The Ottawa Police Service’s hate and bias crime unit is investigating “hate-motivated mischief” after the Capital City Bikers’ Church was defaced with graffiti in advance of Sunday morning’s service that welcomed scores of “Rolling Thunder” participants.

In a brief interview outside the church, pastor Rob McKee blamed the graffiti on adverse media coverage that said his church supported the weekend’s “Rolling Thunder” gathering, which attracted thousands of self-styled “freedom fighters” and motorcyclists to downtown Ottawa in a sequel to February’s truck-based “Freedom Convoy” occupation.

A graphic listing the Sunday service as part of the  itinerary for the weekend had appeared on multiple Facebook pages and websites promoting “Rolling Thunder”.

Live from the Shed, one of the organizers of the “Rolling Thunder” weekend, posted a video Sunday morning suggesting the door of the church had also been egged and tacks strewn in the driveway.

Dave, the spokesperson behind Live from the Shed, said those who committed the vandalism are directly responsible, but he also blamed governments.

“Governments have created an environment of hate and division where certain people are being categorized by our government, by our mainstream media, as dangerous,” he said in the video.

The only hate-motivated crime reported during the “Rolling Thunder” weekend was against the bikers, he said.

McKee’s Pentecostal church was also in the news in February, when “Freedom Convoy” participants went there to receive hot meals, a place to warm up and moral support. The church, which does good work for Vanier residents, polarized its neighbours who alternately supported or slammed it on social media. The church also received death threats following news reports, McKee said.

The “Freedom Convoy” occupied downtown streets for three weeks last winter. The federal government  invoked the Emergencies Act and hundreds of police officers were employed to remove the demonstrators.

Before the Sunday service at the Capital City Bikers’ Church began, members of his congregation mingled with “Rolling Thunder” participants who arrived in flag-waving vehicles or on motorcycles.

Men wearing yellow vests over their church T-shirts directed drivers to park on church property or nearby streets. Since Friday, the City of Ottawa had made streets closest to the church tow-away zones just as the downtown core closest to Parliament was designated a vehicle exclusion zone.

Sunday morning’s scene outside the church saw different slices of society that had come into tense conflict during the Freedom Convoy’s final days co-exist more peacefully. A few police officers were present, on foot and in vans. Reporters and camera operators documented the arrival of “Rolling Thunder” vehicles, whose occupants wore their support for “freedom” and “the Fringe” on their hoodies, ball caps and T-shirts.

The church, which McKee said draws about 400 people each Sunday, was at full capacity, and a few dozen more people seated at picnic tables beside the church took in the service’s worship music and McKee’s sermon, piped through a loudspeaker.

Among the service’s attendees was Jim Kerr, a fixture at protests against pandemic safety measures who had come to Ottawa from Oshawa with his aptly named bubble-blowing “Bubble Bus.”

Kerr said he slept Saturday night in his bus, which was parked beside the church. Sunday morning, McKee’s wife, Melissa, warned him about tacks on the ground, he said.

Kerr said his bus was towed three times during the weekend, and that he was arrested once, but not charged with an offence.

“The whole thing was tomfoolery as far as I was concerned,” said Kerr, who added that a $20 bill he found in his pocket must have been planted there by a generous police officer during a run-in.

He said he received about 10 tickets, including two for smoking on municipal property.

Asked what he would do about the tickets, Kerr first said that it would be easy for him to raise money to pay them but then said: “My plans are not really any of the news’s business.”

Kerr livestreamed many of his interactions with police on the weekend on his Facebook page.

That included an incident Friday night when police asked Kerr to remove his bus from a parking lot because the generator on it producing a stream of bubbles was too loud. “That’s a violation of my religion!” he hollered. “Because this is the church of bubbles and it blows my bubbles!” The video shows police escorting him off the bus and the bus being towed.

On Sunday morning, the Ottawa Police Service tweeted that since 7 a.m. Friday, 761 parking tickets were issued, 39 vehicles were towed, and 10 tickets were handed out for noise, smoking, public urination and miscellaneous offences.

— With files from Jacquie Miller