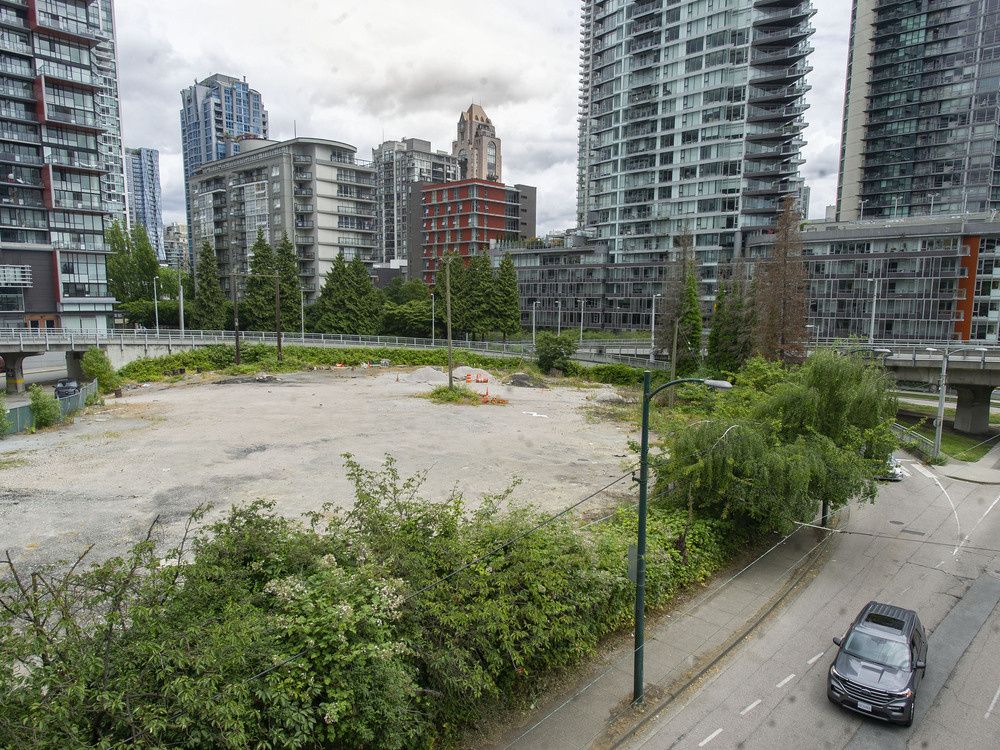 Vancouver is proposing a new development of six residential towers with condos, rentals and social housing totalling almost one million square feet at the north end of the Granville Street Bridge, a plan that is drawing mixed reviews from residents and urban planners.

The city’s general manager of planning and urban design is recommending city council refer a rezoning application for the land between Seymour and Howe streets along Pacific Boulevard for a public hearing.

The land is currently occupied by the old Black Top Cabs office to the west and the Continental SRO hotel to the east. It would need to be rezoned to allow the building of two 40-storey towers of market condos, two 27-storey towers and two 12-storey towers of mixed condos, rentals and social housing, according to a city report.

The buildings, which would include a childcare centre and retail and commercial space, would be built where the traffic loops now connect bridge traffic to Pacific Street. The decision to tear down the loops was approved by the city five years ago.

Of the 134 responses from the public to the city’s online comment platform collected from Jan. 4 through Oct. 7, 2021, 85 were opposed, 33 were in support and 20 were of mixed opinion.

Those opposed were concerned about mass and density (including lack of adequate setbacks), building height (including loss of views and shadowing), noise and disruption, the amount of social housing in an area with “too much” social housing, increased traffic, lack of schools and childcare, and the removal of the loops, according to the report.

Those in support said more rental and social housing is needed, the mass and density is welcome, and the development was appropriate for the area, but they would like to see more parks, amenities, retail, and pedestrian and bike paths.

One urban planning expert told Postmedia that Vancouver is locked into building towers instead of exploring “middle-density” options that work elsewhere, while another said the plan doesn’t include enough affordable rental units.

Building towers achieve density, but there are other ways to densify neighbourhoods that would improve a city’s livability, said UBC’s Michael Hooper, an associate professor in the school of community and regional planning.

“Vancouver’s approach to density has been to build towers,” he said. “There is a sense that density looks a certain way, with tall towers, and if people don’t like towers, they don’t like density. That is a simplistic way to view density, and a particularly Vancouver simplicity.”

What Vancouver could be exploring or experimenting with are urban plans that include a greater number of smaller towers spread out over a larger area to achieve the same amount of density, he said.

Vancouver has more residential high-rises than any other North American city, according to skyscrapercentre.com, with more than 650 buildings over 10 storeys and 50 over 32 storeys.

Hooper said concentrating tall towers in a city’s downtown or in one area but allowing lower density elsewhere doesn’t necessarily translate into a high overall density. For instance, he said Los Angeles has better density than New York City because L.A. has “vast swaths of middle-density buildings” throughout the city.

He said middle-density buildings of four to six storeys over a wider area than just along arterials can create livable neighbourhoods, citing Westbrook Village on UBC campus as an example.

“In Vancouver, the simplistic focus on housing units alone presents a challenge” if cities aren’t supplying the amenities necessary for “good density,” such as community centres and schools, he said.

UBC Prof. Patrick Condon, the James Taylor Chair in Landscape and Liveable Environments, said in an email that Vancouver is “ignoring the success of the Olympic Village form of housing that gets high density out of a mid-rise ‘courtyard building’ typology.”

He said cities should “insist on a minimum of 50 per cent of affordable non-market housing units, pegged to 30 per cent of median family income and below, as the condition for approving any density increases along the Broadway corridor,” and he said the same should apply to the proposed Granville Bridge development.