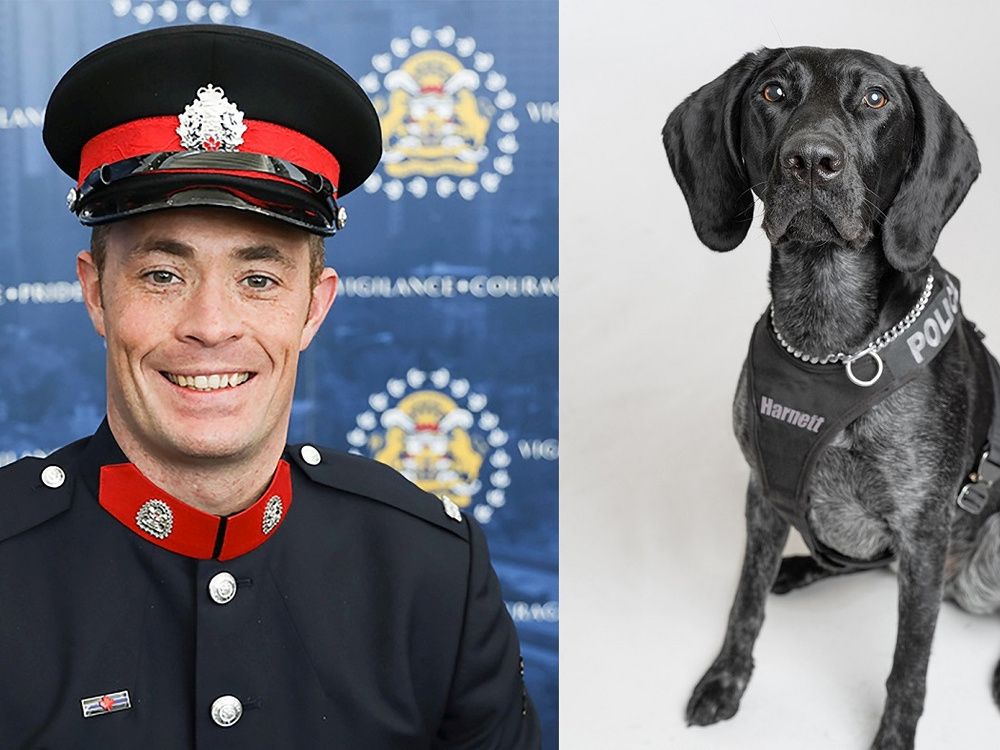 The newest member of a specialized Metro Vancouver Transit Police unit will carry the name and legacy of a fallen Calgary police officer.

Harnett, one of two explosive detection canines enlisted during a graduation ceremony Thursday, is named for Calgary police Sgt. Andrew Harnett, who was fatally wounded on New Year’s Eve 2020. Harnett was dragged by a vehicle that fled a traffic stop, struck by oncoming traffic and later succumbed to his injuries.

“We will never forget the ultimate sacrifice Andrew made and it brings us comfort knowing he will be remembered in Vancouver as well,” Calgary police and Harnett’s family said in a statement.

“This is going to be an opportunity for our handlers to tell the stories of these two fine officers and what they’ve done for policing and the legacy that they’ve left,” McGuinness said in a video post.

The two dogs were presented with service medals during Thursday’s ceremony, where McGuinness spoke about Harnett’s work during his 12 years with the Calgary force.

“He was passionate about his role in the community and participated in many fundraising activities through the Calgary Police Service,” McGuinness said.

“Andrew didn’t need formal recognition for anything, but he earned the respect of those who knew him, worked with him, and of his community.”

An outdoor rink in the northeast Calgary community where Harnett served was dedicated in his name last September. The rink is located at the Falconridge/Castleridge Community Association.

Harnett’s family could not attend Thursday’s ceremony, but posted their appreciation on social media.

“What a honour. Another real digger named #Harnett is back on the watch,” Andrew’s brother Jason Harnett tweeted.