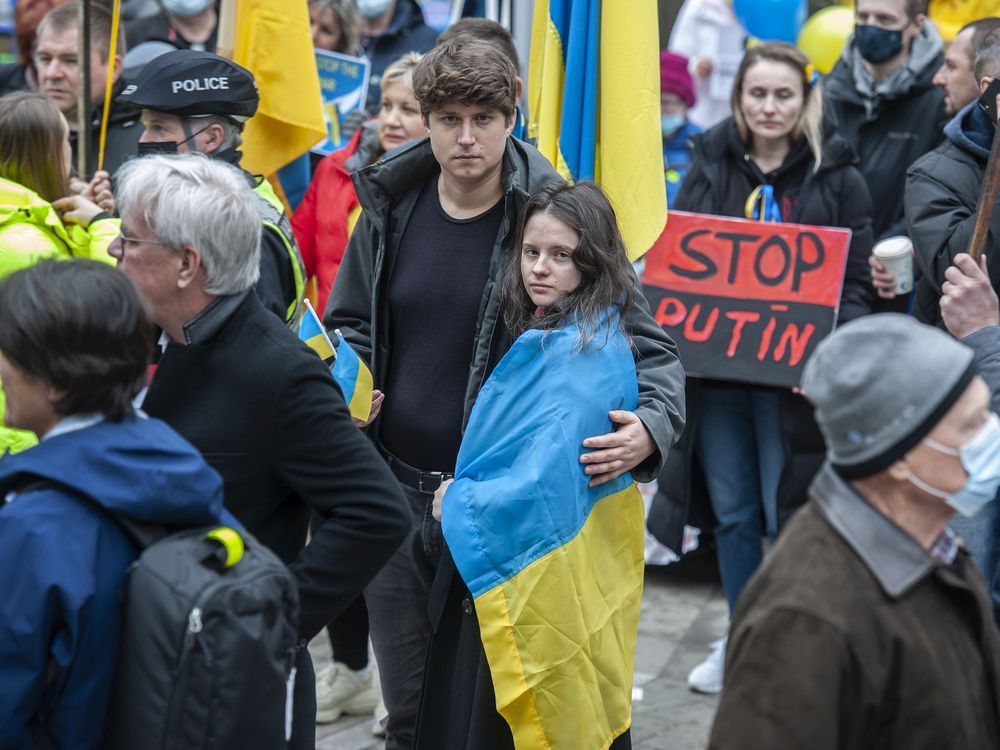 Serhii Yarovyi was finishing up his workday Wednesday in Vancouver when Russian President Vladimir Putin declared a “special military operation” against his home country of Ukraine.

The 29-year-old technology manager heard Putin say via computer link that Ukraine posed a serious threat and needed to be demilitarized.

“I called my parents in Kremenchuk, it was 5:30 a.m. They woke up, we made a list of what they will need while hunkering down at home, including supplies of food and water. My father rushed to the store,” Yarovyi told Postmedia News.

Nearly an hour later, an air raid siren signalled the beginning of an invasion in the former Soviet nation, an act that has sparked wide-scale protests in the West, including one Saturday on the steps of the Vancouver Art Gallery.

Hundreds of Ukrainians, including Anna Ivasyshyna, who met Yarovyi in their hometown and moved to Vancouver in November 2020 to study at Emily Carr University, denounced Russia’s decision to invade with signs and chanting.

The 24-year-old recalls informing her father of the news while he was visiting friends in western Ukraine.

“He immediately drove 20 hours back to my mom,” Ivasyshyna said. “Gas was being rationed at 20 litres per sale so my father had to beg strangers for help to get more fuel. He narrowly missed missiles aimed in his direction.”

Russia’s defence ministry has claimed to have “neutralized” the country’s airbases, destroyed at least 74 military ground facilities and 18 radar stations for anti-aircraft missile systems and captured Melitopol, a city of 150,000 in southeastern Ukraine.

In Vancouver on temporary work and study visas, the Ukrainian couple fears for their families back home.

“We haven’t gotten much sleep in the past three days. I keep thinking I want to go back to Ukraine and be with my family, but my mother tells me she prefers for me to stay here in Canada, where it’s safe,” Ivasyshyna said.

“My parents are asking me if I can offer my 17-year-old sister shelter in Vancouver, she was evacuated to another region of Ukraine, but I am not a permanent Canadian resident so it’s really difficult.”

Despite a more stable democracy in recent years, Ukraine is again under siege in Russia’s biggest assault on a European state since the Second World War. At least 198 Ukrainians, including three children, have been killed.

The UN High Commissioner for Refugees said Friday that more than 50,000 Ukrainian refugees have left their country in less than 48 hours and many more are moving toward the borders.

Yarovyi has been keeping in touch with friends still in Ukraine, including Elizaveta Vybornova, through encrypted messaging platforms. He has received photographs from citizens who have lost their homes in war zone regions.

“I woke up to the first round of explosions at 5 a.m.,” Vybornova told Postmedia from her home in a small town near Kyiv, which is undergoing intensive fighting with Russian troops who were unable to secure the capital city as of Saturday.

“All I’ve been able to hear is jets flying over and gunfire. No one in my family has left the house. We are scared,” said the 23-year-old.

She recalls a 2013 political revolution that brought more benefits of democracy to Ukraine, including the ability for her to attend university, receive medical coverage and “feel like a free citizen in my own country.”

“I never thought this war could happen again,” said Vybornova, while preparing an emergency shelter in her basement in case missiles strike.

Her family, like many others, have chosen not to flee the country but resist Russian military influence.

“This is our home. We cannot and will not leave,” she said.