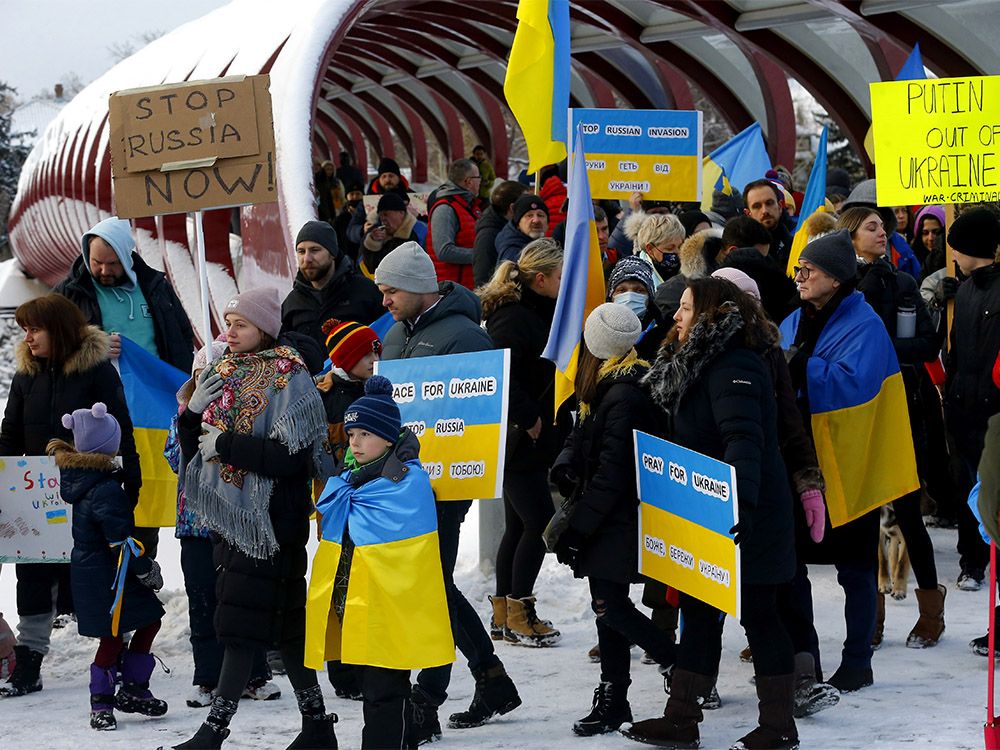 Ukrainians in Calgary are afraid for the safety of their loved ones in their home country, who woke up to a different world Thursday as Russia launched a barrage of missile, artillery and air attacks on its neighbour.

Ukrainian officials said Russia has launched a full-scale invasion from at least three fronts, including from Crimea in the south and Belarus to the north, marking the biggest attack by one state against another in Europe since the Second World War.

Inna Platonova, president of the Ukrainian Canadian Congress Calgary Branch, said Russian forces bombed the military base in her hometown of Podolsk in the Odessa region early Thursday.

“I went to bed knowing my home region was bombed,” Platonova said through tears. “My parents told me I shouldn’t go there because they don’t want to see me killed. That’s what they said.”

Platonova said Canada needs to expedite its immigration policy to ensure Ukrainians are able to get out of the country as quickly as possible. She also called on Canada to take stronger measures outside of sanctions to stop Putin’s forces.

“We are at the juncture where something urgent needs to happen to stop it. Because this is not just about Ukraine, this can spread all over the world,” she said.

The Congress’s Calgary chapter organized a gathering at the Peace Bridge at 5 p.m. Thursday in support of Ukraine. The Assumption Ukrainian Catholic Church in the city’s northeast will open its doors for a service at 7 p.m. Platonova said the Congress is also accepting donations to help families.

“Stand with us and we will pray together. That’s all we can do,” she said.

There are more than 350,000 people of Ukrainian descent living in Alberta, including at least 90,000 in Calgary, according to 2016 census data.

The Ukrainian flag was raised at city hall on Thursday to show support “for a sovereign nation under a horrifying and unprovoked attack” and the Ukrainian community in Calgary, Mayor Jyoti Gondek said in a tweet.

The City of Calgary has raised the flag of Ukraine to show support for a sovereign nation under a horrifying & unprovoked attack. We stand in support of the Ukrainian community in our city, and people who have close ties to their homeland. #yyc #StandWithUkraine pic.twitter.com/zeGYZ2anVN

Before Russia’s attack, Tryzub dancers decided to show solidarity with Ukraine by performing Heroiam Slava in the spring. The production celebrates ancient Ukrainian traditions, while bringing to light the human toll of the Russia-Ukraine conflict.

“We stopped rehearsal for half an hour and just tried to take in what was going on. It was very emotional,” said Shane Gibson, artistic director with Tryzub. He said they stayed together in the studio to talk about what was happening, their feelings of fear and helplessness.

Gibson’s family lives in the city of Chernivtsi in western Ukraine. Relatives there have told him they are safe, but it’s become incredibly difficult to travel, buy food and supplies, or access currency.

“The international community needs to step up this time. There’s going to be a requirement for financial aid, but even lobbying our government agencies to make it easier for people seeking asylum or refugee status,” he said. “I don’t think sanctions are going to go deep enough.”

Christine Moussienko has relatives living in northern Ukraine, in the path of forces invading from Belarus. She said they were awoken Wednesday night by the sound of explosions.

“We both just cried. You don’t even know what to say, they’re terrified. All of their neighbours have taken off,” Moussienko said. “They’re just going to hunker down, they’ve got a cellar in their house. They don’t have a car. They can’t get out.”

Not knowing how this conflict will end is terrifying, she said.

“We can’t believe this is happening. We’re so scared for our families. We’re devastated,” she said. “We feel helpless.”

“We are devastated,” Kaut wrote in an email to Postmedia. “I thought I would be able to get my parents out of their hometown but I was so wrong. The whole country is on fire, I couldn’t even imagine it being at this scale.”

Prime Minister Justin Trudeau said Canada is imposing more severe sanctions on Russia in response to its military strike against Ukraine, calling Putin’s aggression a “massive threat to security and peace around the world.”

The sanctions involve 62 individuals and entities, including members of the Russian elite and their family members, as well as the paramilitary organization known as the Wagner Group and major Russian banks, Trudeau said.

Trudeau also said the federal government will prioritize immigration applications for Ukrainians who want to come to Canada.