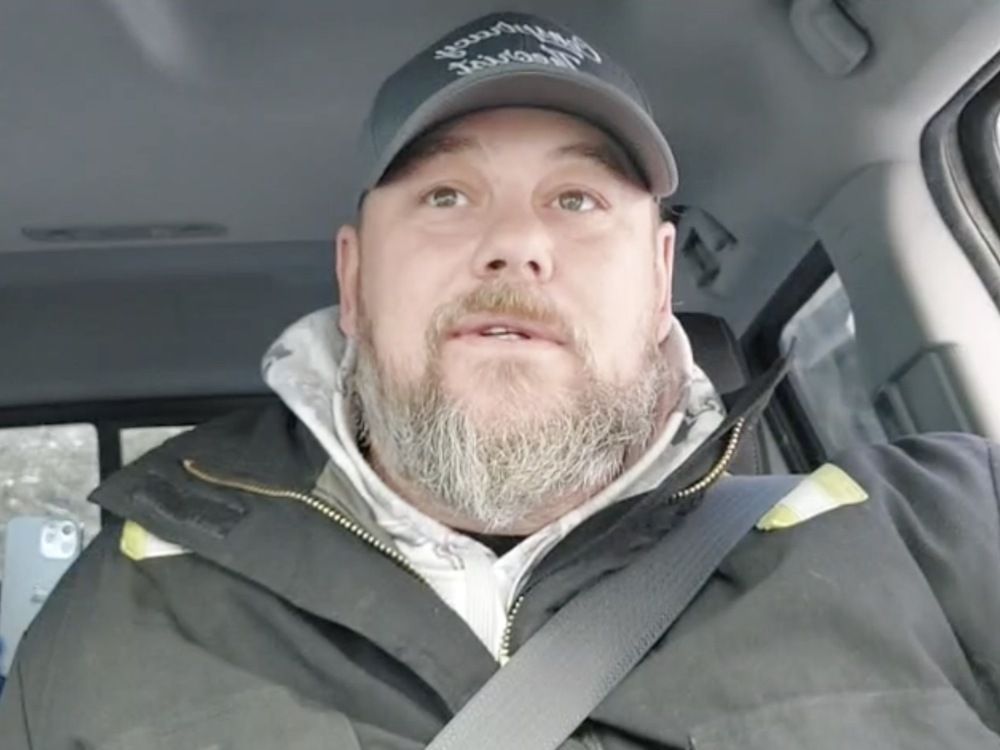 The bail hearing for convoy organizer Pat King took an unexpectedly dramatic turn Friday when the Crown brought new evidence that King allegedly breached court conditions in 2016 by purchasing a restricted handgun two days after an Alberta court ordered him to turn in his firearms.

Assistant Crown Attorney Moiz Karimjee cited what he called “significantly relevant” new evidence in the Crown’s application and asked Justice of the Peace Andrew Seymour to reopen the bail hearing, a move the judge noted is rare at this stage of proceedings.

King sat in the prisoner’s box Friday wearing the same outfit he had worn to his previous hearing, and bowed his head, rubbing his eyes as Karimjee outlined the details of the uttering threats charge King faced in Alberta.

King was charged on Sept. 4, 2016, and Karimjee said King was released on a condition he surrender any firearms he owned to police in Alberta.

He did comply with the order by turning his rifle over to RCMP, but Karimjee said he bought a restricted handgun two days later on Sept. 6.

“In the Crown’s view this evidence is significantly relevant to the question of bail, because it indicates that Mr. King will neither follow the spirit or the letter of the law,” Karimjee said. “It’s like a person charged with dangerous driving and being asked not to operate a car… and two days later he is seen operating a tank.”

The case was resolved with a peace bond in March 2017 that also included a condition prohibiting King from owning weapons, and Karimjee said King’s purchase of the handgun — which was not surrendered and has not been reported lost or stolen — was in breach of both court orders.

Karimjee cited the “disturbing” videos court was shown on Tuesday, in particular the widely-circulated clip where King says the Freedom Convoy protest would “end with bullets.”

King’s lawyer Cal Rosemond complained that the “last-minute” application would further bog down the bail hearing and the precedent of allowing the Crown to reopen the case could further impact “all bail hearings in general.”

Rosemond repeated the same assertion he gave court on Tuesday when he suggested King, if denied bail and detained, would have already served more time in jail than he would face upon conviction.

He dismissed the Crown’s suggestion that King could serve consecutive penitentiary sentences if convicted.

Rosemond also said the Crown was late in disclosing the new firearm evidence to King’s defence team, and suggested the Crown delays could amount to a breach of King’s right to a fair bail process.

Rosemond suggested he would bring an application of his own — if and when the matter reaches trial — to have the charges thrown out of court on those Charter grounds.

Karimjee explained the delay and said the evidence wasn’t raised at Tuesday’s hearing because the RCMP constable only became aware of King’s current situation through media reports of his bail hearing in Ottawa.

“When he heard of Mr. King’s bail hearing he said, ‘I need to get ahold of the assigned Crown in this matter’ ” Karimjee said.

That contact only happened after Tuesday’s session had wrapped for the day, Karimjee said, and the prosecutor produced a sworn affidavit from the officer saying he finally made contact with Karimjee at 6:45 p.m. Tuesday.

Seymour is set to return at 2 p.m. with a decision on whether to allow the Crown to reopen its case to detain King.

The judge has indicated he still hopes to render a decision today on whether to grant bail.