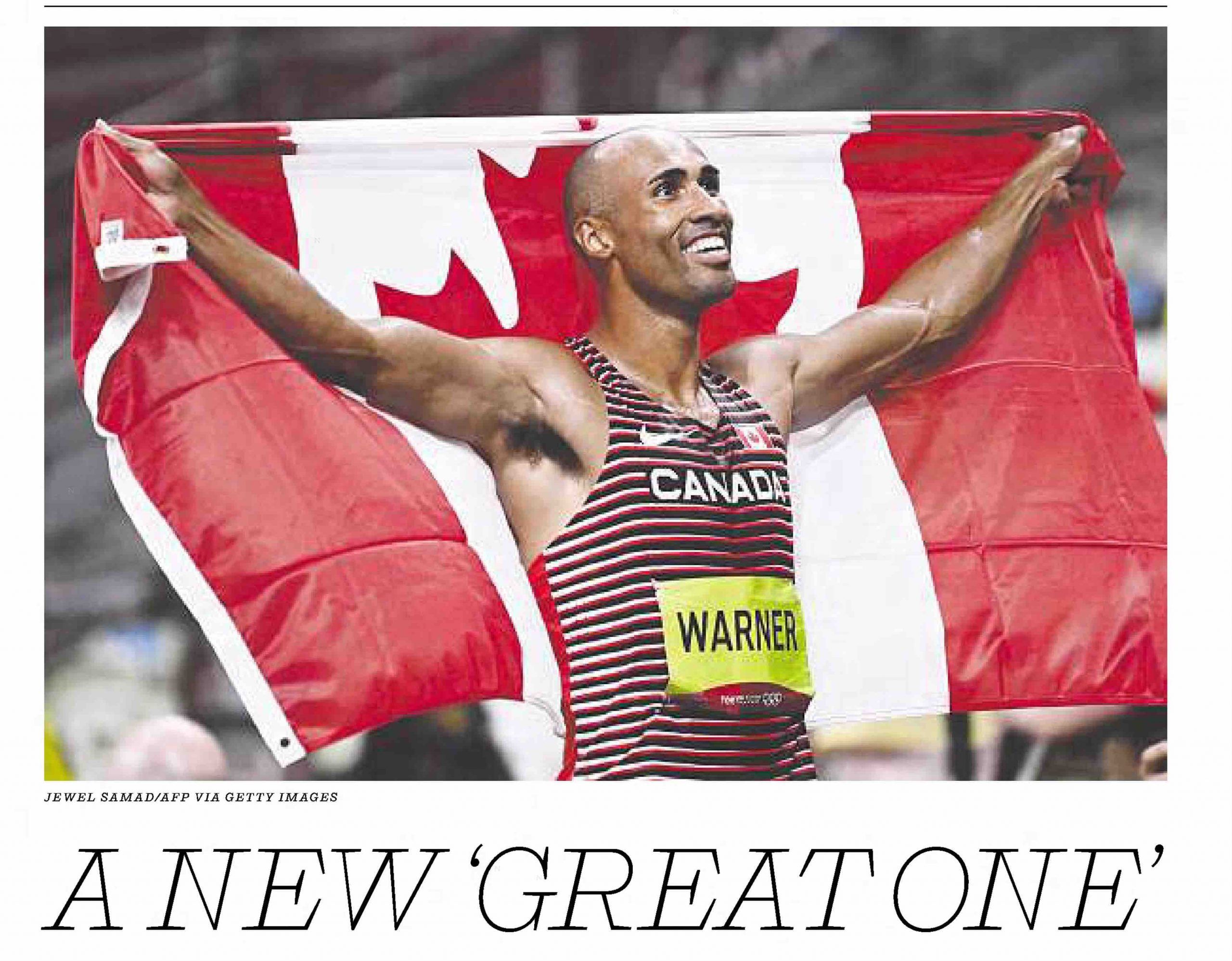 Today in History for Aug. 5:

In 1100, Henry I ascended the throne of England, three days after his brother, King William II, was killed in a hunting accident.

In 1620, the Pilgrim ships The Mayflower and The Speedwell sailed from England.

In 1689, the little settlement of Lachine, just west of Montreal, was attacked by 1,500 Iroquois in a pre-dawn raid. Twenty-four settlers were killed and more than 60 were taken prisoner.

In 1797, Napoleon defeated the Austrians at Castiglione.

In 1822, the Imperial Trade Act regulated trade between Upper and Lower Canada.

In 1833, The Royal William, the first Canadian ship to cross the Atlantic entirely under steam power, left Quebec. It first travelled to Pictou, N.S., and from there took 25 days to cross the ocean to Gravesend, England with a load of coal.

In 1850, novelist Guy de Maupassant was born near Dieppe, France.

In 1858, American businessman Cyrus Field finished laying out the first trans-Atlantic telegraph cable between Newfoundland and Ireland. However, after several weeks of use, the cable burned out.

In 1884, the cornerstone of the Statue of Liberty was laid on Bedloe’s Island, later renamed Liberty Island, in New York harbour. The copper and iron statue, presented to the United States by France, was unveiled in 1886.

In 1886, the first parcel post service from Canada to Britain began.

In 1891, the first traveller’s cheque, devised by American Express, was cashed.

In 1906, American film director John Huston was born in Nevada, Mo. He was known for directing several classic films — The Maltese Falcon, The Treasure of Sierra Madre and The African Queen. He died of emphysema on Aug. 28, 1987.

In 1913, in Victoria, John Bryant became the first air-crash fatality in Canada.

In 1915, British nurse Edith Cavell, matron of a Red Cross hospital in Brussels, was arrested by the Germans for helping 200 Allied soldiers escape to the Netherlands. Cavell, accused of being a spy, admitted helping the Allied soldiers to escape to neutral Holland. Before her execution on Oct. 12, she said, “Patriotism is not enough,” which became one of the rallying cries of the First World War.

In 1924, the comic strip Little Orphan Annie, by Harold Gray, made its debut.

In 1949, an earthquake in Ecuador killed approximately 6,000 people.

In 1951, daredevil William (Red) Hill Jr. was killed as he attempted to go over Niagara Falls in a contraption of rubber inner tubes, canvas and fishnet. A crowd estimated at between 100,000 and 200,000 watched Hill go over the falls. His body was found two days later.

In 1952, Satchel Paige, 47, became the oldest pitcher in major-league baseball history to pitch a complete game or a shutout when he beat Virgil Trucks and the Detroit Tigers 1-0 in 12 innings.

In 1961, Bolivia adopted a new constitution that separated the powers of church and state.

In 1962, actress Marilyn Monroe was found dead of an overdose of sleeping pills in her Hollywood home. She was 36.

In 1963, the United States, Britain and the Soviet Union signed a treaty outlawing nuclear tests in the atmosphere, space and under water.

In 1974, U.S. president Richard Nixon admitted that six days after the Watergate burglary, he acted to obstruct the FBI’s investigation for political as well as national security reasons.

In 1977, Max Yalden was named to replace Keith Spicer as commissioner of official languages.

In 1979, Cindy Nicholas swam across the English Channel and back in a then-record time of 19 hours, 12 minutes.

In 1982, a Chicago woman burst into flames and died. She was the eighth recorded victim of human spontaneous combustion, based on records dating to the 18th century. (The veracity of the phenomenon is debated in scientific circles, with many doubting whether spontaneous human combustion is plausible without an external source of ignition.)

In 1984, Welsh actor Richard Burton, former husband of Elizabeth Taylor, died of a stroke in a Geneva hospital at age 58.

In 1986, Canada became one of six Commonwealth countries to adopt economic sanctions against South Africa because of its apartheid policy. They included bans on air links, new bank loans and government contracts with majority-owned South African companies.

In 1987, African National Congress founder Nelson Mandela marked the 25th anniversary of his imprisonment in South Africa. Mandela had been captured in 1962 after spending 17 months underground forming the newly outlawed African National Congress. Even though more than half the country’s blacks had been born after his imprisonment, the 69-year-old Mandela remained the embodiment of black resistance to white minority rule in South Africa. It was illegal to publish his picture or to quote him. Mandela was released from prison in 1989 and later became the country’s president. He served as leader from 1994-1999.

In 1992, Toronto’s Mark McKoy won the 110-metre hurdles at the Barcelona Olympics. It was Canada’s first Olympic gold medal in track since 1928.

In 1993, Canada and the U.S. signed a pact to end a long-running dispute over beer. The pact gave American brewers better access to the Canadian market.

In 1996, U.S. President Bill Clinton signed a bill punishing foreign companies that invested in energy projects in Iran and Libya.

In 1999, after 15 years of fighting and 31,000 deaths, the Kurdistan Workers Party declared the struggle for Kurdish self-rule over. The announcement followed party leader Abdullah Ocalan’s call for peace on Aug. 2.

In 2000, Sir Alec Guinness, the elegant and versatile British stage and screen actor known for the wide range of roles from Shakespeare to Star Wars, died at his home in southern England. He was 86. He played many memorable characters in his 66-year career, including a British colonel in 1957 epic The Bridge on the River Kwai and Obi-Wan Kenobi in Star Wars.

In 2003, in a historic vote, the American Episcopal Church endorsed the first openly gay Anglican bishop with the appointment of Gene Robinson as Bishop of New Hampshire.

In 2005, a toxic chemical spill from a derailed CN Rail car dumped 51,000 litres of sodium hydroxide into Cheakamus River north of Squamish, B.C., poisoning an estimated 95 per cent of fish.

In 2006, a tornado razed a campground at Gull Lake, Man., killing one woman and injuring dozens other people.

In 2009, former Livent theatre executives Garth Drabinsky and Myron Gottlieb were sentenced to seven and six years respectively in prison for fraud and forgery. Both men remained free on bail after posting $350,000 each pending a notice of appeal on the sentences. (In 2011, the Ontario Court of Appeal upheld the convictions but their sentences were reduced by two years.)

In 2010, eight soldiers suffered minor injuries after a Canadian Chinook helicopter was forced to make a hard landing and burst into flames near a remote village southwest of Kandahar city. The military later said it was brought down by small arms fire.

In 2010, a cave-in at a gold and copper mine in the northern region of Copiapo, Chile, trapped 33 workers nearly 700 metres below ground. On Aug. 17, a narrow drill broke through to reach an emergency refuge where the miners had gathered. The hole was used to send small capsules containing food, water and oxygen until rescuers could drill a second shaft some 70 centimetres in diameter, wide enough for the miners to be pulled up one by one. Just after midnight local time on Oct. 13, the first of the miners was brought to the surface. All 33 were out by Oct. 14th.

In 2011, credit rating agency Standard & Poor’s downgraded the U.S. one notch for the first time since it was granted a AAA rating in 1917. The news sent global stock markets tumbling when they re-opened after a weekend break on Aug. 8 and investors seeking safety sent gold past the US$1,700 threshold for the first time.

In 2011, NASA’s sun-powered robotic explorer named Juno rocketed away on a five-year journey to Jupiter, in hopes of answering some of the most fundamental questions of our solar system.

In 2012, a 40-year-old U.S. Army veteran and reported white supremacist opened fire at the Sikh Temple of Wisconsin in suburban Milwaukee, killing six people and critically injuring three. The gunman died of a self-inflicted gunshot wound to the head after he was shot by police.

In 2012, Jamaican sprinter Usain Bolt won his second straight Olympic gold medal in the men’s 100 metres, crossing the line in an Olympic-record 9.63 seconds. Bolt joined Carl Lewis as only the second man to go back-to-back in track’s biggest race. (Bolt won again in 2016.)

In 2012, NASA’s robotic explorer Curiosity blazed through the pink skies of Mars, steering itself to a gentle landing inside a giant crater.

In 2013, Alex Rodriguez, baseball’s highest paid player, was suspended for 211 games in a performing-enhancing drug case involving Florida-based clinic Biogenesis. (He appealed and kept playing and an arbitrator later reduced the suspension to the entire 2014 season.) Twelve others, including All-Stars Nelson Cruz, Jhonny Peralta and Everth Cabrera, accepted 50-game bans.

In 2016, the Summer Olympics officially kicked off in Rio de Janiero, the first Olympic Games in South America. Canada finished 10th in the overall medal standings with 22 (4 gold, 3 silver, 15 bronze).

In 2018, Venezuelan President Nicolas Maduro dodged an assassination attempt when drones armed with explosives detonated while he was delivering a speech to hundreds of soldiers.

In 2018, a magnitude 7.0 quake that struck the Indonesian tourist island of Lombok killed more than 460 people, damaged tens of thousands of homes and displaced several hundred thousand people.

In 2018, Saudi Arabia expelled Canada’s ambassador and froze new trade deals with Canada in a growing dispute over the Liberal government’s criticism of human-rights violations in the Islamic kingdom.

In 2019, Nobel Prize-winning author Toni Morrison died at Montefiore Medical Center in New York. She was 88. Morrison was the first black woman to receive the Nobel literature prize, awarded in 1993. The Swedish academy hailed her use of language and her “visionary force.” Her novel Beloved, in which a mother makes a tragic choice to murder her baby to save the girl from slavery, won the Pulitzer Prize for fiction in 1988.

In 2020, Ottawa pledged up to five-million-dollars in humanitarian aid for the battered city of Beirut. Development Canada said an initial 1.5-million will be directed toward meeting the urgent needs of a population left devastated by a massive explosion. Countries around the world sent search and rescue teams, emergency medical personnel and equipment, money and humanitarian aid to Lebanon.

In 2021, thirty-one-year-old Damian Warner of London, Ont., became the first Canadian to win gold in the decathlon. Warner didn’t just capture the gold medal in Tokyo, he set an Olympic record with 9,018 points. That makes him just the fourth man in history to top the 9,000-point mark. Canoeist Laurence Vincent-Lapointe won the silver in the women’s C-1 200-metre race. The 29-year-old from Trois-Rivieres, Que., finished the sprint in a time of 46.786 seconds. Lauriane Genest of Levis, Que., won the bronze medal in the women’s keirin track cycling event.