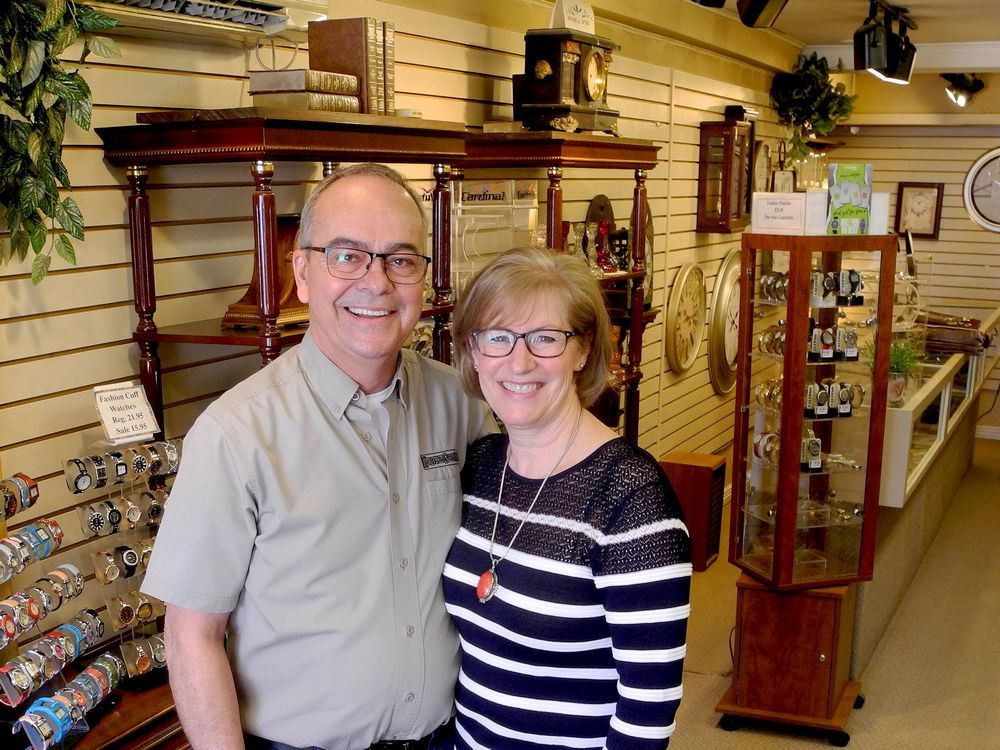 Time has flown for Gaetan and Barbara Fortier of the Heritage Clock Shop in downtown Brockville.

After 29 years of operating the iconic clock store, the couple will retire on May 28 and the ticking and chiming of the hundreds of clocks in the shop will be heard no more.

The Heritage Clock Shop at 112 King Street West has an old-world, small-town feel to it. The walls are covered by clocks that bong and chirp on the hour while long glass cases exhibit hundreds of watches.

Customers, many of whom the Fortiers have known for decades, are greeted by the couple personally and given hands-on service. Small repairs are done on the spot while the customers wait.

Three decades ago, mothers would come in with their babies, and now those babies are coming in with their own infants, Barbara said.

The couple is the third generation of clockmakers. Barbara’s father, Robert Baier, was a German craftsman who apprenticed for his clockmaker father in Northern Germany, where the father had a clock and jewelry store.

During the 1950s, Baier immigrated to Canada and settled in Eastern Ontario in the Cornwall area. He established himself as a master craftsman and served an area that stretched from Cornwall to Ottawa.

In the 1980s, Barbara and Gaetan were working in retail in Ottawa (Barbara in a clock shop). Gaetan had learned clockmaking from his father-in-law, at first as a hobby. But when word of Gaetan’s talents got around and demand grew, the couple decided to try their hand at setting up a repair and retail clock business.

They couple spent months scouting Eastern Ontario for a location. When they saw Brockville, it was love at first sight, Barbara said.

They quit their jobs in Ottawa, spent two weeks getting a small shop ready, and opened for business on May 3, 1993.

They eventually persuaded Barbara’s father to relocate to Brockville to help out at the shop.

Business was slow at first and the hours were long, but Barbara said they love the business, especially getting to know their customers, many of whom have become friends.

Gradually, things picked up, mainly through word of mouth, and the shop expanded next door. She and Gaetan also began making house calls to repair heirloom grandfather clocks. Gaetan would assess the problem and then take the guts of the clock back to his Brockville shop for repair. Often he had to fashion his own parts to repair the old clocks.

Barbara said they travelled as far as Montreal, Ottawa, Toronto and Belleville to pick up the old timepieces.

At the retail store and repair shop, Barbara said customers from all over Eastern Ontario and even the United States would come to visit.

Business has continued to be good, even in the era of the cellphones that kids use instead of watches.

“It hasn’t hurt our business,” she said. “There are many folks out there who appreciate the value of a good watch. Many folks enjoy having a watch on their wrist.”

But the future of the Heritage Clock Shop is murky. The couple advertised the business for sale in a British horology publication but got no bites.

Barbara said the business has been rewarding, but there are challenges, too. They work six days a week at the shop and sometimes two Sundays a month on the road making house calls.

Often, the couple will work into the evening because Gaetan needs quiet and uninterrupted time to do delicate work on a clock.

“We spend more time in the shop than at home,” she said.

The couple has had two vacations in the last three decades.

So, plans for retirement?