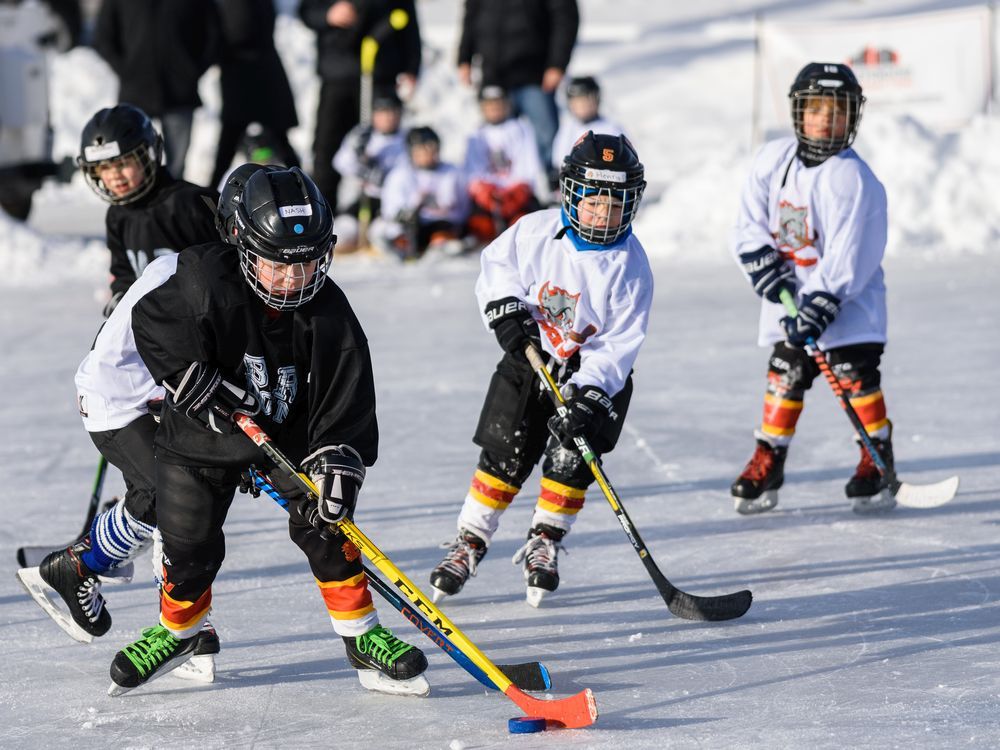 Despite the frigid temperatures gripping Alberta this week, more than 50 teams of young hockey players are gathering at Chestermere Lake to compete in the third annual Tim Hortons Western Canada Pond Hockey Championships.

Extreme cold warnings have been in place for much of the province since the weekend when temperatures dropped below -30 C, with wind chills cold enough that Environment Canada says frostbite can develop within minutes of exposure. According to Environment Canada, a wind chill of -30 was recorded Tuesday morning in Calgary and was expected to warm slightly to -25 in the afternoon.

The pond hockey tournament on Chestermere Lake was postponed a day due to the even colder conditions on Monday and is taking place from Tuesday to Thursday this week.

Organizer Alex Halat said about 750 hockey players aged four to 17 were bundled up and enjoying the game as things kicked off on Tuesday. The men’s league tournament was cancelled due to COVID-19 restrictions but they kept it as a youth tournament.

“It’s been awesome so far. We’ve got music going, we have free Tim Hortons hot chocolate and as I’m looking out right now there are probably about 800 people on the water enjoying themselves,” said Halat.

A few thousand visitors are expected to head to the ice to watch the tournament at some point over the three days, Halat said. There are tents with heaters set up to keep players and guests warm between games.

“Once that cold weather hit, I had about a dozen volunteers from town step up and show up every night to run the heaters, light towers and ensure the generators were going. We’ve actually got about 14 heaters going in all of our tents to keep the kids warm,” said Halat.

Some parents have also set up their own fishing huts with portable heaters, he said.

While a few players have dropped out because they’ve developed COVID-19 symptoms before the games started, Halat said none of the teams who signed up have quit due to weather.

This year, the event is raising money for Camp Chestermere and Synergy, a local charity that aims to empower youth and community groups to build strong connections through relationships, education, leadership and programming.

The cold temperatures in Alberta have cancelled events and closed ski hills over the past few days. The Calgary Zoo’s Zoolights event was cancelled Sunday and Monday due to weather, and Sunshine Village, WinSport and Nakiska Ski Area all shut down operations on the weekend.

Zoolights is returning Tuesday evening and will run for the rest of the week, the Calgary Zoo announced Tuesday afternoon while encouraging patrons to bundle up.

ZOOLIGHTS, presented by Olympia Trust Company, is BACK ON tonight & for the rest of the week! Bundle up & enjoy the magic of the holidays under the twinkling lights! A reminder that masks are required indoors. We look forward to warmly welcoming you! https://t.co/SBEIb40S9V pic.twitter.com/ScTVMmR3ax

Sunshine Village reopened Monday and WinSport opened Tuesday, however, Nakiska Ski Area remained closed on Tuesday due to the cold. Nakiska Ski Area announced they intend to reopen on Wednesday.

The cold weather is expected to cling to the province for a couple more days, though the daytime temperature in some regions — including Calgary — continues to rise. Environment Canada’s forecast says Calgary could see a high of 0 C by Saturday, though it’s expected to chill again soon after.

The City of Calgary issued a reminder on Tuesday for people to be careful on roads and sidewalks with the extreme cold and snowfall.

“The City focuses on managing ice by applying abrasives to the road (gravel/sand) and plowing lanes,” said city officials in an online post.

“Our crews work 24/7 through the winter to keep Calgarians moving … We encourage Calgarians to plan ahead. Ensure your vehicles are winterized and cleared of snow prior to departure, bundle up, leave plenty of time for your commute and, if travelling on the roads, drive carefully and leave plenty of space between your vehicle and the vehicle in front of you.”

When snow falls, the crews focus on high-volume routes like Crowchild Trail and Glenmore Trail, and motorists are encouraged to be extra cautious at intersections, bridge decks and hills where ice has built up after several days of frigid weather.

Calgary was experiencing a light snowfall on Tuesday afternoon, which was expected to continue overnight.