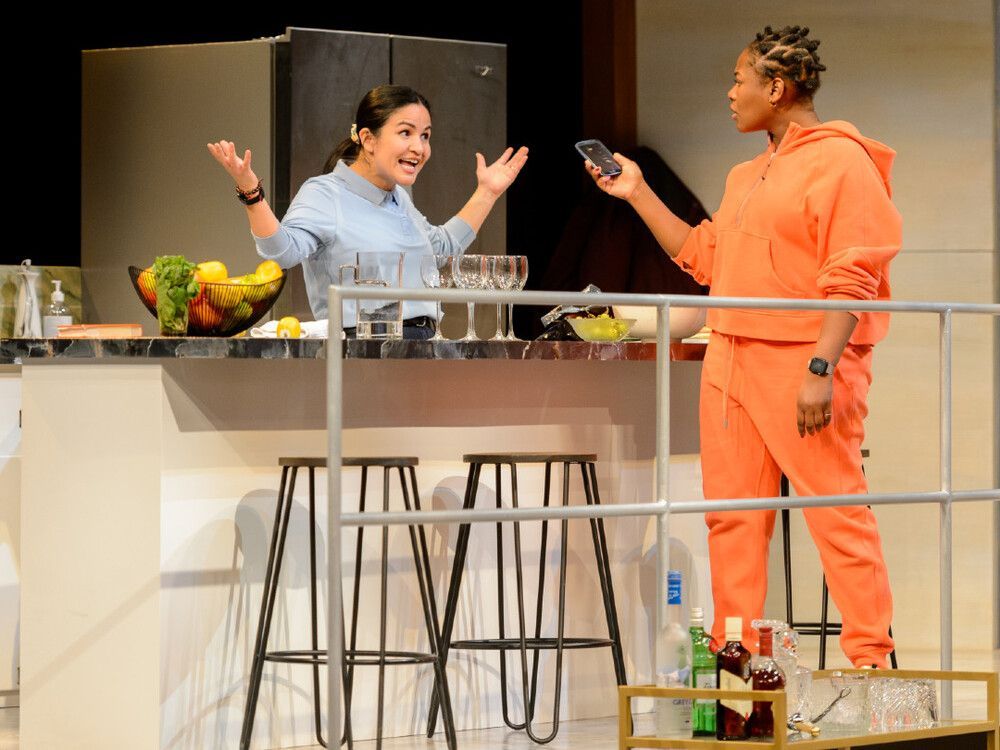 I never saw Calpurnia in its original form, but the reworking of the play that’s now being staged at the National Arts Centre is terrific — it’s insightful, hilarious and thoroughly on target in exploring questions of race, privilege and allyship that have become part of the public discourse in recent years.

Written by Winnipeg playwright Audrey Dwyer and rewritten over the last couple of years with director/dramaturg Sarah Garton Stanley, it’s a play with many layers, starting with the classic novel To Kill a Mockingbird and a main character, Julie (played by Emerjade Simms), who’s battling writer’s block as she works on a screenplay written from the perspective of the Finch family’s maid, Calpurnia.

The expansive set designed by Rachel Forbes — with its mid-century modern dining set, sleek kitchen area and a moving stage — makes a great approximation of the Forest Hills home where Julie and her brother, Mark (Kwaku Adu-Poku) grew up, raised by their father, a retired judge (Ray Strachan), after their mother died. Her portrait hangs on the wall.

In addition to Julie, Mark and their father, the cast also includes their Filipino housekeeper Presy (Rochelle Kives), the brother’s wife, Christine (Ellie Ellwand), and an important dinner guest (Arne MacPherson) who turns out to be problematic, especially in the eyes of the “woke” members of the younger generation.

In the first act, the family dynamic is laid out in wordy dialogue that sometimes moves a little fast, though everyone executes their lines with impressive skill and timing, plus an exaggerated physicality that not only helps define the characters, but also makes excellent use of the big stage, with more than a few laughs along the way.

An important family dinner is the focus of the second act, and there’s a huge surprise in store that I’m not going to spoil here. Suffice to say I didn’t see it coming, but it’s hilarious, centring on a tour de force comedic performance by Simms and a fiery debate on who’s oppressing whom.

In all, it’s a show that’s highly recommended, especially for anyone interested in a greater understanding of the concepts and language of diversity and inclusion and who doesn’t mind a self-deprecating laugh or two.

Me, Vivien Leigh and the Roller Rink

Another fine piece of theatre I saw this past week was the one-woman show by Lucy Van Oldenbarneveld that’s part of undercurrents, a festival of emerging theatre run by Ottawa Fringe.

While folks in Ottawa know Lucy as a TV news broadcaster, here we see her creativity and personality shine. Titled Me, Vivien Leigh and the Roller Rink, it’s a tale of Lucy’s childhood and coming-of-age in the early 1980s. One of three children raised in gritty Hamilton by a single mother, there was never much money for things like clothes and makeup, but young Lucy was determined to get out of Steeltown.

She shares her journey with wit and charm, making it look easy to memorize more than an hour of storytelling, punctuating it with a lively physical presence, dancing, prancing and, at one point near the end, even donning roller skates for a couple of laps around the stage.

No less entertaining are the great impressions of her Dutch parents and other figures in her life, plus a soundtrack filled with ’80s nuggets by everyone from Teenage Head to Air Supply. Also well-selected are the props she uses, not to mention the glorious vintage-style satin bomber jackets that were all the rage in the roller-disco halls of the day.

Despite a bit too much emphasis on the message to find one’s own path, it’s an illuminating look at the early years of a minor Ottawa celebrity, delivered with a candour that makes it universally relatable.

(Tickets and info at undercurrentsfestival.ca)