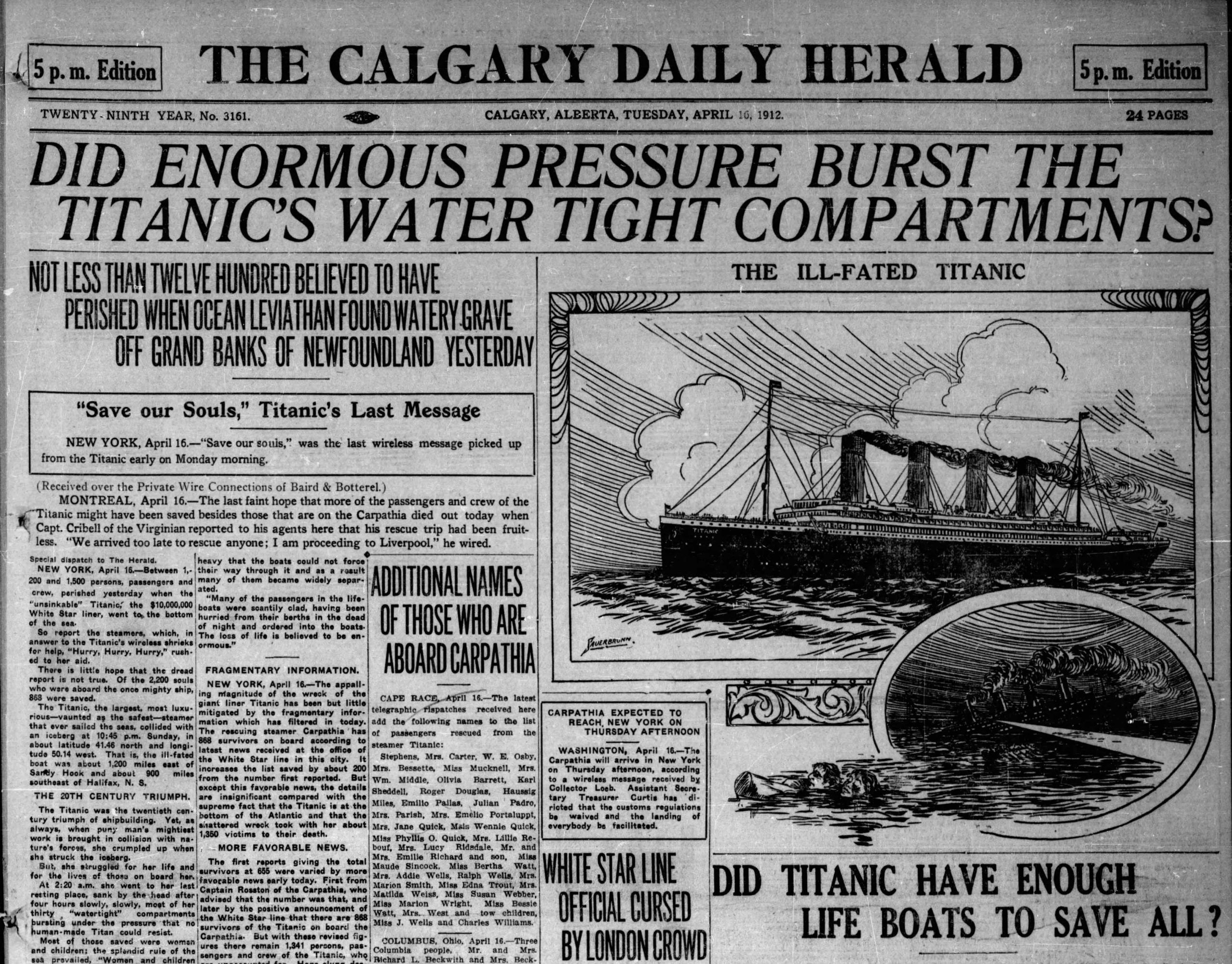 The sinking of the Titanic may have occurred 110 years ago this week, but the story of the ship is far from forgotten. Scientific expeditions exploring the ship’s ruins, museum exhibits of recovered artifacts and, of course, the Hollywood blockbuster of the same name have led to the memory of the Titanic staying strong in modern times.

On April 10, 1912, the Titanic began its maiden voyage, leaving Southampton, England. But tragedy occurred just four days later, when the luxury liner sank just hours after hitting an iceberg. More than 1,500 people aboard the ship died.

The world had been watching construction of the massive ship and following newspaper reports that were published around the globe. One of the first stories about the Titanic that appeared in the Calgary Daily Herald was published two years before the ship was launched.

The Olympic and its sister ship the Titanic continued to make headlines the following year, especially as the Olympic made its maiden voyage on June 14, 1911.

The Olympic was the largest ship in the world until the Titanic launched the following year. Experts suggest the Titanic was about three inches bigger, and much heavier. News stories about the Titanic increased in frequency as its launch date approached in April 1912.

One local Calgary business announced it was selling tickets for the return trip of the Titanic from New York back to Europe.

As the Titanic was setting sail on its maiden voyage, a small collision almost occurred between it and an American liner moored in the same harbour. “Disaster was narrowly avoided,” newspaper reports said.

The first reports of the Titanic’s sinking were full of speculation. Newspapers in Europe and North America were given inaccurate information that all passengers had been rescued and were on other steamers. A wireless message received at St. John’s Newfoundland said “all the passengers have been taken off the Titanic.” Sadly, that wasn’t the case. Other wireless reports received along the east coast of North America contained conflicting messages, with some saying the Titanic was still moving towards North America on its own steam and others saying the ship was sinking.

Even with early reports of the disaster reaching land, the vice-president of the White Star Line, P.A.I. Franklin, insisted, “We place absolute confidence in the Titanic. We believe the boat is absolutely unsinkable and although she may have sunk at the bow, we know that the boat would remain afloat.”

Within a day, new reports arrived that reflected the massive loss of life and many began asking important questions such as whether or not Titanic had enough lifeboats.

The sinking remained a front page story around the world for days.

In the days that followed the disaster, the Herald was publishing 10 to 12 stories a day about the Titanic.