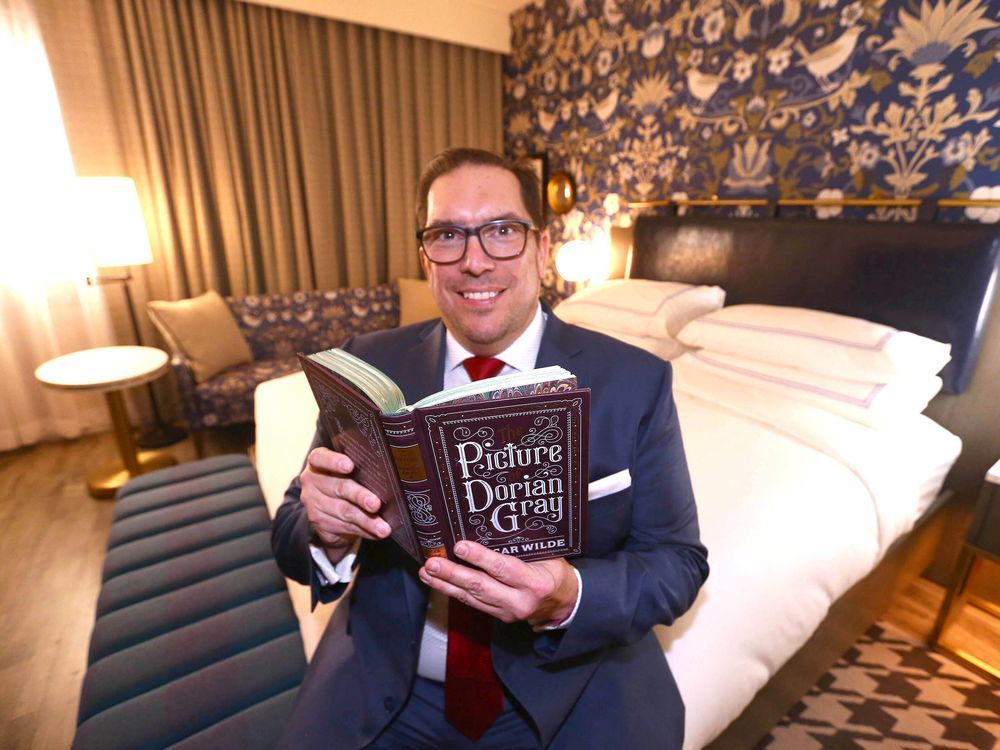 In two months, The Dorian hotel will open its doors in downtown Calgary.

It’s a $115-million investment in an industry and a neighbourhood that has been devastated by a recession and pandemic restrictions, but general manager David Keam is convinced they are entering the market at just the right time.

The Dorian is taking its queues in spirit and style from the Oscar Wilde classic The Picture of Dorian Gray — which will be in every room.

“The freedom that some of the characters have at certain points of the book is absolutely what we are trying to incorporate in this,” he said during a sneak peek Thursday afternoon. “People want to have fun, they want to party, they’ve been forced into compliance for things they haven’t wanted to do for so long that this hotel is going to be a place where you can do what you want. We’re not going to encourage anything, but we’re also going to take care of you while you’re in Calgary.”

The Concord Hospitality property is split into two tiers. The top floors and 137 rooms will be part of the Autograph Collection for Marriott and carry the Oscar Wilde inspiration. The bottom floors and 169 rooms will be called Courtyard Calgary Downtown, and will be on par with other business-class hotels in the area and will have access to the Autograph amenities, which will include a top-of-the-line gym and restaurant.

The top half of the hotel aims to set a new level of experience and standard in Calgary, and will be the priciest rooms in the city.

Keam is not concerned that will discourage bookings as rates in other markets are higher than they were before the pandemic, taking advantage of the pent-up desire to travel.

The hotel has had success recruiting management and has three job fairs planned to fill other positions.

“We have a bit of freedom — a lot of the people who are choosing to join our team are doing it because they really want to be in a hotel that’s wide open again,” he said. “Other hotels have had to weather two years of low rates and low occupancies.”

It is also a signal the local hotel industry is starting to rebound.

During the pandemic, the city lost about 1,000 rooms to conversion and liquidation, and The Dorian will represent a significant growth to inventory.

That issue is not entirely due to COVID restrictions and travel bans.

The sector has been restructuring in Alberta since late 2014 when the price of oil crashed, having a negative effect on the hospitality sector.

While occupancy is a standard measuring stick for the health of the industry, the more telling stat is revenue per available room — how much money a hotel is able to generate for every room whether it is filled or not.

According to the CBRE, Calgary was consistently at the top in Canada, including in 2014 when it averaged $117. Just before the pandemic, Calgary averaged about $88 per room, but it crashed in 2020 to the lowest in any major market to $27 — Edmonton was at $32.

Through the first quarter of 2022, CBRE is forecasting a recovery to $62, which places it ninth out of the 13 markets they track. Vancouver is at the top, projecting $117 per room.

“Calgary and Alberta’s challenge is that the activity related to the energy sector needs to return, and as restrictions are getting lifted visitations are also returning,” said David Ferguson, director for CBRE hotels. “It all bodes well for the direction Alberta and Calgary are going to go, but it’s going to take some time to get there.”

He added that downtown hotels were hit the hardest by pandemic restrictions due to the cancellation of conferences, sporting events and other draws.

Sol Zia, executive director for the Calgary Hotel Association, said occupancy in the downtown was hovering around 10 per cent in January. There was positive momentum as restrictions lifted in March, but occupancy in the first quarter was about half of pre-pandemic numbers.

While financial assistance from various levels of government has ended, Zia said staffing concerns will be eased by Ottawa’s announcement of changes to the temporary foreign worker program.

The biggest challenge for the sector will be getting the conference and events calendar filled again.

Despite the momentum, hoteliers are cautious about the future, especially after Alberta lifted restrictions last summer, only to see them reimposed.

“We have to be risk averse,” said Zia. “The entire industry is operating cautiously as we come out of this, and that relates to investment and infrastructure — many of those things are still on hold.”