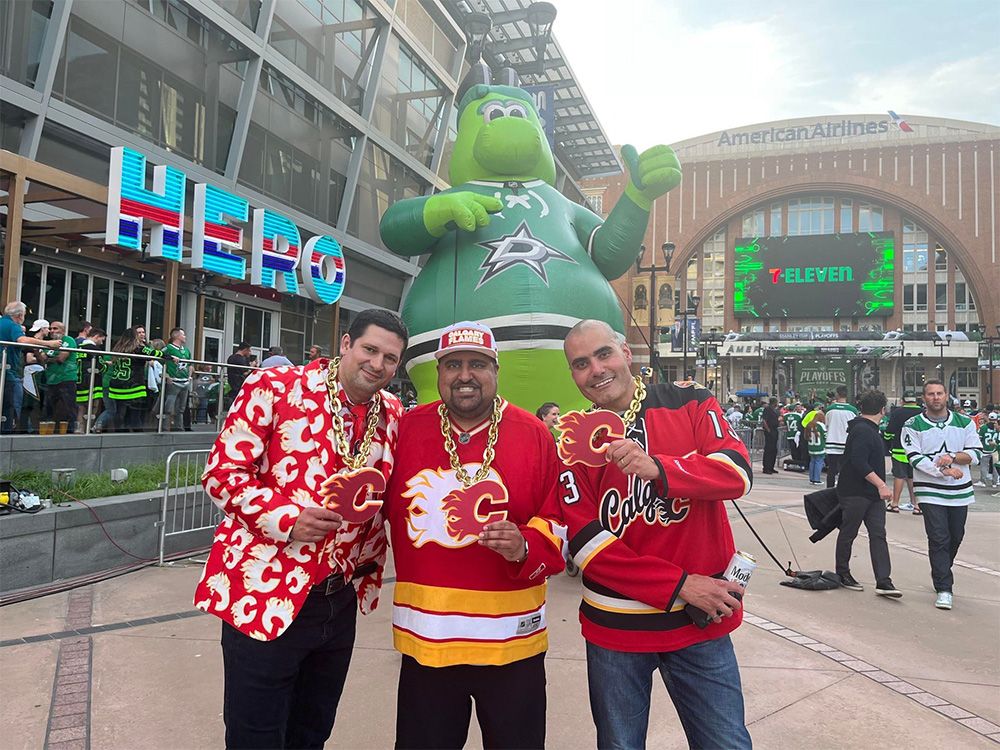 Before the puck dropped in Texas for Game 3 of the Calgary Flames’ first-round clash against the Dallas Stars, Flames loyalists made their presence known.

During the pre-game American anthem, fans in the stands could be heard yelling out the words “see” and “red” alongside the anthem singer at the American Airlines Center.

It’s a tradition travelling Flames fanatics brought south of the border, in which those words in the U.S. anthem are emphasized at the Scotiabank Saddledome in recognition of the Sea of Red.

A few hundred Flames fans were in Dallas for Saturday night’s Game 3 clash, estimated Ervin Bata, who made the trip to attend the game with friend and fellow Flames fan JP Hoyeck.

For Bata, the trip was in support of a team he’s hoping will have a deep playoff run this spring.

“It’s our team. I’m a season-ticket holder in Calgary, and you’ve got to support the boys wherever you can,” he said.

“We were pleasantly surprised how many Flames fans there were compared to (how many Dallas fans) were in Calgary … In Calgary, if we saw maybe 10 of them in total, that was a big number.”

Sanj Shergill planned to go catch a road game in the first round no matter who Calgary played, but was happy to have a chance to return to Dallas, where he previously lived during a college work term.

“It worked out that it was Dallas, and I had a reason to come visit, and I’m just a diehard Flames fan, so I thought, ‘let’s make a trip out of it,’” Shergill said.

Aside from a few aggressive fans, Shergill said hanging with Stars faithful was a good experience, with no shortage of ribbing from rival fans in the arena.

“It is what it is, you go into enemy territory and you’ve got to expect it, but I didn’t have any negative experience, they were all great,” Shergill said.

“It was such a good atmosphere, but I still think the Dome has their number, but they got loud.”

Anthony Schulmeister and his father Bernie decided to catch the Flames during their first-round matchup, and expected that series to be against the Nashville Predators until the Dallas series was locked in on the final day of the season.

They flew to Dallas for both Games 3 and 4 — but not before having to cancel their trip to Tennessee.

“We rerouted to Dallas and booked the next day,” Anthony laughed.

“The fans were good-natured. It’s not like going to Edmonton,” Bernie added.

The Flames’ first tilt in Dallas didn’t end as fans would have liked, with the Flames falling 4–2 to go behind 2–1 in the series, as the team’s offensive challenges continue.

But Bata took an optimistic view on the team’s struggles to capitalize early against the Stars.

“We were hoping for a better result, but it makes it more exciting. Sweeps are great, but I think you need to build character for down the road. You can’t just win 4–0. That’s not what playoffs are about,” Bata said, adding he hopes to get back in the stands for away games if the Flames advance to the second round or beyond.

The Schulmeisters will be back in the building in Dallas Monday night, when Calgary’s Cup chase continues with a 7:30 p.m. MT puck-drop in Dallas. The duo said they’re hopeful the team can come back to Calgary with the series tied.

“With the possession and everything, I think the Flames are outplaying them,” Bernie said.