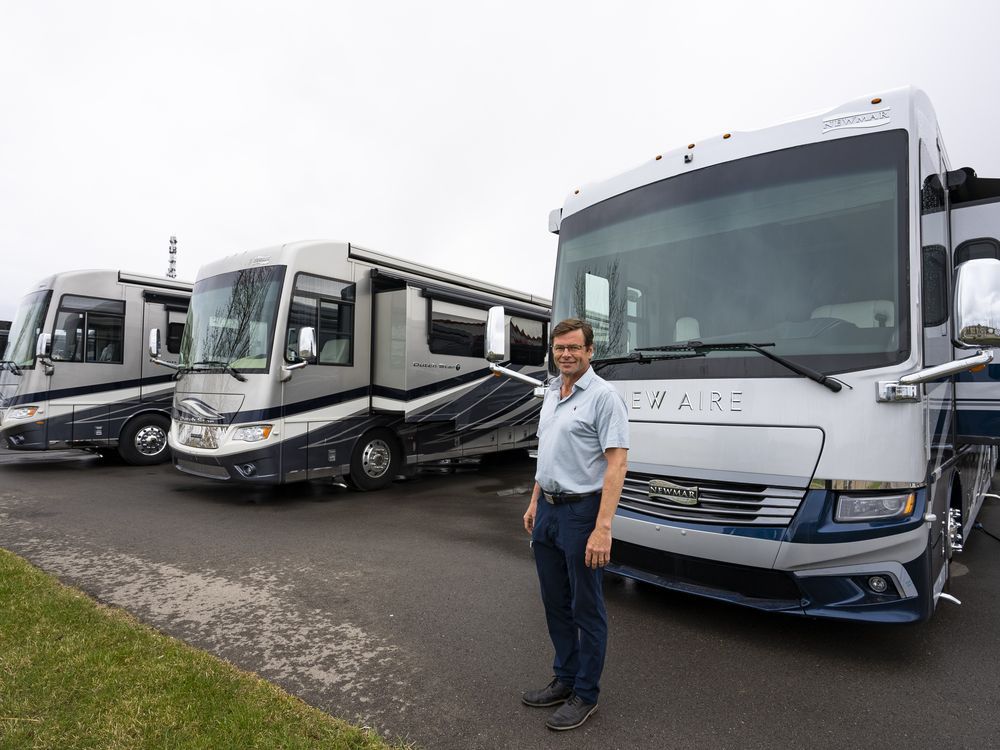 The owner and general manager of Bucars RV Centre in Balzac, Alta., says recreational vehicles are still one of the most affordable ways to travel as a couple or with a family once hotels, gasoline prices or airline costs are factored in.

“We laugh that RVers are the ones that are winning,” Redmond said in an interview this week.

The cost of gasoline declined slightly before this May long weekend, the unofficial kickoff to summer camping season, but analysts say summer demand in coming weeks has the potential to send prices even higher.

Redmond said that could influence where he travels this year.

“The Okanagan Valley is a place I like to go … and that’s a seven-hour drive, so maybe I am going to go to Pigeon Lake or Gull Lake (Alberta), which is an hour-and-a-half drive,” he said. “The good news is that I am still going.

“We’re able to alter our plans and to work within our budget.”

Redmond said he has heard a similar sentiment from customers. Some are staying closer to home. Others are planning to stay longer at one campsite.

“You park the larger trailer at a permanent campsite, or at your friend’s cottage, or at the old family farm, or at a winery in the Okanagan — and you don’t tow it,” he said. “You hop in your family car and you go back and forth. You have a built-in, very affordable … off-the-grid cabin that is extremely efficient once you get there.

“Lots of people are no longer towing.”

Rob Minarchi is vice-president of sales at ArrKann Trailer & R.V. Centre with outlets across Alberta. He said there’s been a lot of demand for RVs since the start of the pandemic and it hasn’t slowed down this year.

“Most (people) are upgrading, as crazy as that sounds,” he said from Edmonton. “Some people are selling … because circumstances have changed but, for the most part, they are just trading in for different units.

“There’s a lot of new RVers who came to the market when COVID first hit … but they didn’t know exactly what they wanted.”

Those customers, he said, are trading in for units that better suit their needs.

Minarchi said he hasn’t heard about anyone getting rid of an RV due to high gas prices.

“What we’re seeing is a lot of people are just camping a little closer,” he said. “If they were going to do a five-hour trip, now they are going to do a one-hour trip … I think it actually ties in a little bit with COVID and staying close to home.

“They found so many hidden gems locally … in the last couple of years that they are OK to do that.”

Some campgrounds are starting to notice some changes.

“I’ve had a few people cancel,” said Scott Kast, owner of Tomahawk R.V. at Lake of the Woods in Ontario.

But, he said, gas prices are a minor factor in those cancellations.

“We do get a lot of Americans here. One thing holding people back is vaccine mandates,” said Kast.

Another campground manager told CKPG radio station in Prince George, B.C., that some people travelling from farther away have cancelled.

“A lot of people are wanting to stay local,” said Bobbie Carpino, who runs the Salmon Valley campground.

The price of fuel could add $100 or $200 to the cost of an average camping trip, Minarchi said.

“It feels like a lot when you are at the pump but … it’s still affordable to do it,” he said. “One less restaurant that you eat out at pays for the difference in your fuel for the whole camping trip.”

Some RVers, he said, are adding solar panels and buying generators to make it easier to camp off the grid — including on Crown land. Others are parking their RVs at permanent sites for the entire summer.

“They are still camping, so that’s good.”

Redmond said the pandemic encouraged many people to get outdoors in their RVs, on a mountain bike or with a set of golf clubs.

“I am a guy that went and bought a new bicycle and there’s no way I’m selling my bike. It’s been awesome to get on the trails and get reintroduced to that,” he said.

“There (are) lots of people, their lives got in the way of our great outdoors. They are stepping back now and saying, ‘Wow, that was great’ and they are going to keep doing it.”