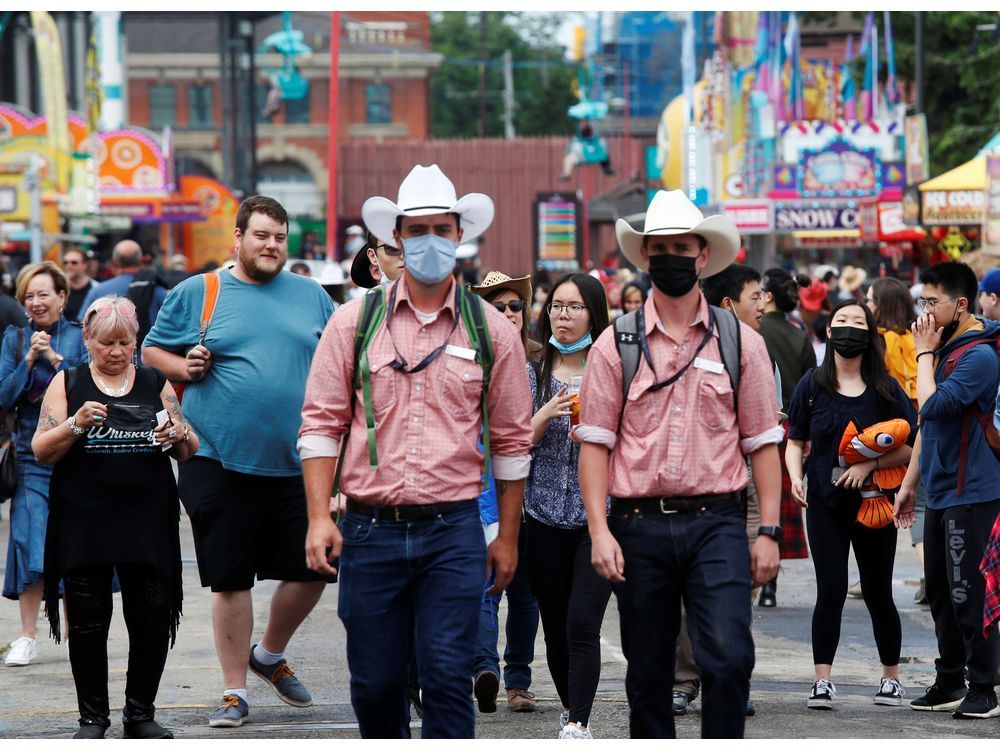 After shaving its pandemic losses by 70 per cent last year, the Calgary Stampede is banking on a break-even 2022 and a return to near-normal for its 10-day summer roundup.

The scaled-down version of the Greatest Outdoor Show on Earth saw it significantly reduce losses — from $26.5 million in 2020 to $8.3-million last year.

Just four months into the COVID-19 pandemic, the 2020 edition was cancelled for the first time in its then-108-year history and seven years after the show went on even in the muddy aftermath of the 2013 southern Alberta floods.

A year ago, the non-profit’s annual report stated that fiscal challenges “could jeopardize the Calgary Stampede’s ability to continue as a going concern.”

But the Stampede’s new CEO, Joel Cowley, said with good weather in July and barring a sustained COVID-19 flare-up, the annual event could ride into the range of a normal year and turn that longer-term tide.

“We feel we’ll have turned the corner . . . the first job was to stabilize it and I feel we have stabilized it,” he said.

“It’s headed in the right direction, though there’s still some uncertainty and challenges right now with inflation and fuel prices.”

Even with its smaller size, forging ahead without the 2021 event would have been a considerably more daunting prospect, said Cowley.

“We were able to fire up the machine — if there had not been a 2021 Stampede, that would have been three years between events,” he said.

Last year, that figure rebounded to $35.4 million — still a far cry from the 2019 figure, which has meant the exhibition has reduced its workforce by about 35 per cent, said Cowley.

“We can build back the way we should be . . . in finding efficiencies it’s a reset in rebuilding our team and structure,” he said.

That was roughly in line with expectations for an event still operating amid the COVID-19 pandemic, and where concerts at Nashville North were conducted with pandemic protocols.

The Rangeland Derby — a marquee feature of the annual blowout — was cancelled last year, drawing considerable criticism from the chuckwagon racing community.

But the return of the chucks this summer is possibly the most visible sign of the Stampede’s attempt at a full return to normalcy, which should also be reflected in more live music events, said Cowley.

The annual canvas auction selling Rangeland Derby sponsorships, seen as a barometer of local economic health, will be held April 12 at Stampede Park.

And with the exception of some lost exhibit space due to BMO Centre expansion construction, the 2022 edition will be back to its full attraction footprint, said Cowley.

For now, the Stampede is budgeting for attendance of just over one million people, which would be considered a successful rebuilding year on the way to maximum numbers, said Cowley.

The local hospitality industry is eagerly looking forward to a Stampede return to form, said Cindy Ady, CEO of Tourism Calgary, which is working harder than usual to ensure that.

“We’re looking at recovery and we’re investing in help for the Stampede this year,” said Ady.

“It’s really the launch to our summer season, it’s a huge signal to our industry — there are many businesses who make their profit in those 10 days.”

Some uncertainty remains over the return of big-spending international visitors this summer, she said.

But with the continual easing of COVID-19 travel restrictions, there’s hope on that horizon already being seen in a busier Calgary International Airport and other indications, said Ady.

“Hotel operators are telling me their phones are beginning to ring again and, on the convention front, we’re getting site visits, something we haven’t had in two years,” she said.

One-and-a-half months ago, about 25 per cent of Tourism Calgary’s partners’ doors were shuttered amid the usual slower winter season and pandemic pains, she said — a situation that’s now being reversed.

One fly in the ointment of full recovery could be another COVID-19 wave brought on by new Omicron variant BA.2, said Ady.

Another is a labour shortage driven by an exodus during lean pandemic times, she added.

“We need people to come out and work in the industry again — it’s not just a problem in Calgary, it’s nationwide and international,” she said.