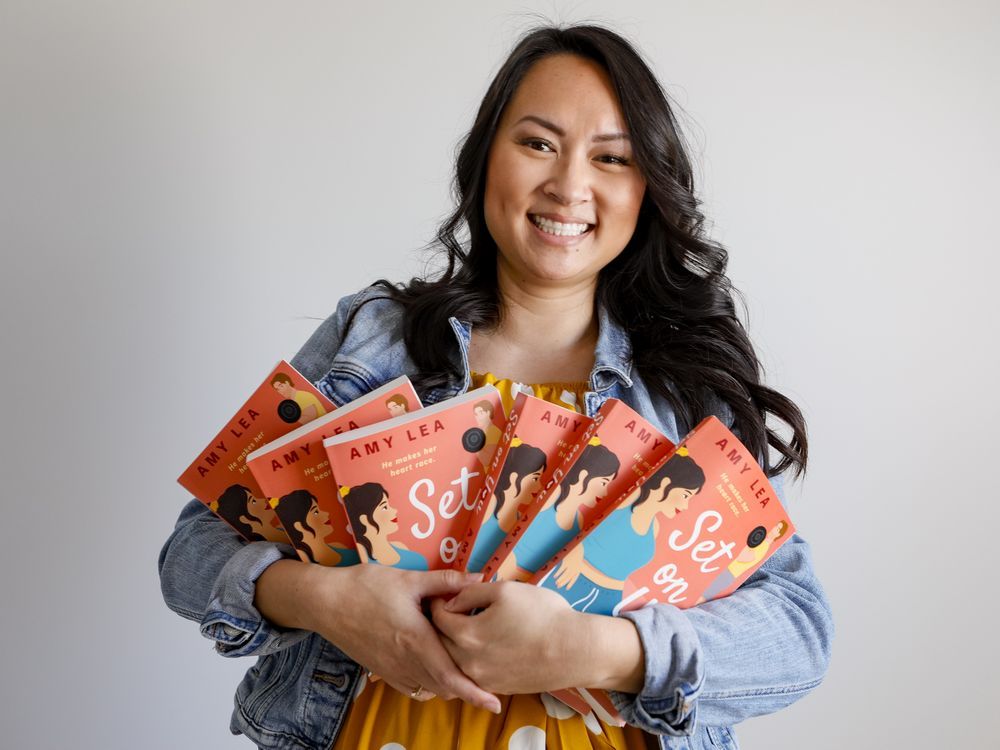 Set on You
By Amy Lea

Amy Lea remembers walking through a bookstore a few years ago when she spotted a novel with an Asian girl on the cover. She picked it up, read the back and bought it on the spot.

The book was To All The Boys I’ve Loved Before, the best-selling young-adult novel by Jenny Han that was adapted into a popular Netflix movie series.

For a voracious reader like Lea, who was then in her mid-20s and living in Ottawa, the image was a revelation. She grew up in the Northern Ontario town of Espanola, west of Sudbury, and had never seen an Asian person on the cover of anything.

“I know there must have been other books before but I had never seen them, and definitely not in a romance,” she said during a recent interview. “Growing up I never saw a lot of representation, whether it was movies or TV or books, and I didn’t realize it when I was a kid but when you don’t see people who look like you in mainstream media, you begin to think, ‘Am I not worthy of being a main character?”’

The thought was in the back of her mind when she came up with the main character in her debut novel, Set On You, the first of a three-book deal with Penguin-Random House. A brisk, light-hearted and surprisingly touching romantic-comedy, it spotlights Chrystal Chen, a fitness influencer and body-positivity advocate, and the sparks that fly when a handsome firefighter shows up at the gym. The book came out this month.

“I wanted to portray a character who defies the societal norm of what you would think of a fitness influencer,” says Lea, who moved to Ottawa for grad school and works for the federal government by day. “Crystal is curvy and half-Asian so she’s somebody who doesn’t necessarily fit the standard of beauty that we’re used to.”

There’s always been a huge appetite for romance novels around the world, a thirst that’s now being fed by a contingent of influencers on social-media platforms, particularly Instagram and Tik Tok. As part of a community of “bookstagrammers” who review what they’re reading and post photos of books, Lea was able to tap into the trends in modern romance while working on her novel.

One thing she learned from the community is romance readers love a well-written sex scene, and after two fairly tame drafts failed to gain traction with agents, Lea ignited the burners in Set On You, capturing the passion of physical intimacy. She also knew that readers expect a couple to live happily ever after.

“Romance brings comfort to people because it’s a guaranteed happy ending,” says the 31-year-old author. “Though a lot of the books deal with difficult topics, you have the comfort of knowing it’s going to end well. I think that’s really valuable when things are uncertain and kind of dark in the world.”

Crystal Chen is one of a cast of new characters to be brought to life by Ottawa-area fiction writers this season. Here are three more books featuring strong women to add to your summer-reading bag:

The Embroidered Book
By Kate Heartfield

Heartfield, a former editor and columnist at the Ottawa Citizen, continues her writing career in this well-researched historical fantasy about two little girls in 18th-century Europe destined for royalty, and the spellbook that gives them secret powers. At more than 600 pages, it’s a hefty work that already has significant advance buzz: Its U.K. release earlier this year drew the attention of critics and landed on the Sunday Times bestseller list. The Guardian described it as an absorbing novel with convincing characters, and praised Heartfield’s ability to “sustain a fine balance between history and fantasy.” It’s out May 24.

Welch is a writer who grew up in Ottawa but now makes her home in Kamloops, B.C. Here, she revisits home territory by setting her first novel in the rural Eastern Ontario hamlet of Hopetown, where main character Melissa Makepeace must unravel two mysteries, the recent disappearance of a boyfriend who has memories of having been in a bee colony, and her father’s vanishing act when she was a young girl. In addition to her search for truth, the story touches on environmental concerns and sustainable farming, lending a modern context to the fast-paced tale.  (The author holds a meet-and-greet at Perfect Books, 1-3 p.m. on June 5).

Veteran novelist Chapman has fans throughout the English-speaking world for her Anna Sweet and Stonechild and Rouleau mysteries, and now she’s launching a third series. The first instalment of the Hunter and Tate series introduces us to a laid-off newspaper crime reporter named Ella Tate and her detective friend Liam Hunter. Tate is trying to build a second career as a true-crime podcaster, but when people around her start dying, she realizes she might be in danger, too. Set in the Glebe, it’s a well-crafted page-turner that explores the evil lurking in the shadows of the nation’s capital.