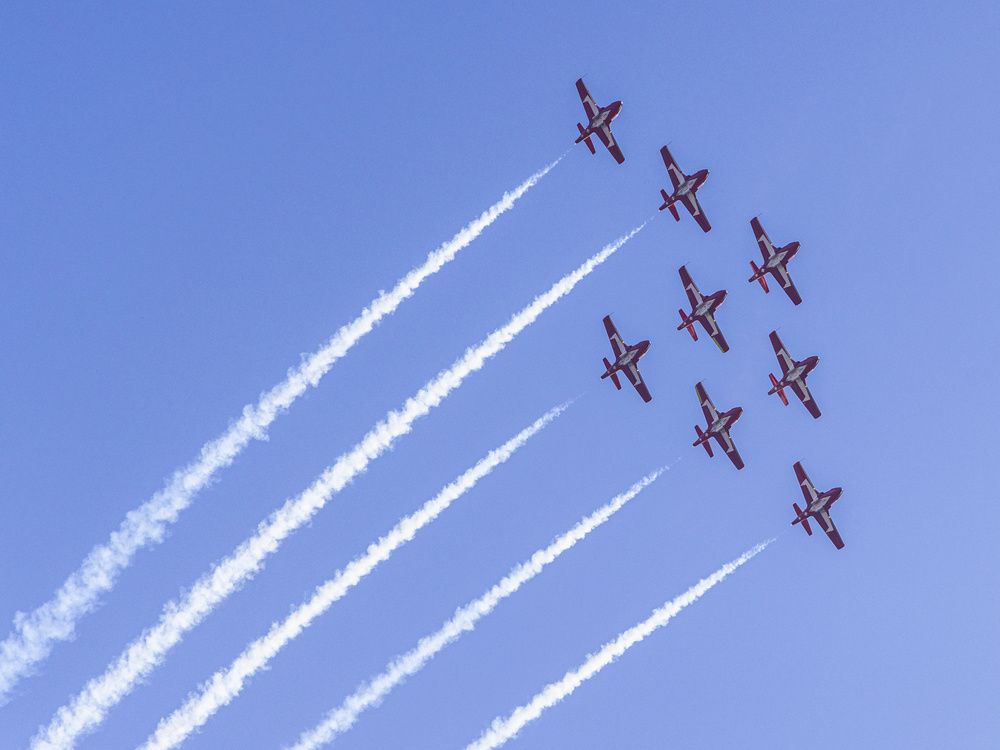 The Canadian military’s Snowbirds aerobatic team will be on the ground for the next week as investigators try to figure out why one of its aircraft crashed during takeoff on Tuesday.

The team has not officially been grounded but will not, for the time being, fly their CT-114 Tutor aircraft. “The CT-114 Tutors are not being flown at this time while the RCAF awaits more information from flight safety investigators,” Department of National Defence spokeswoman Jessica Lamirande said Wednesday.

There is no firm timeline on how long the aircraft will be on the sidelines, she added. “We’ll have more information once the flight safety investigation team has completed their initial inspection,” Lamirande added.

The Snowbirds were supposed to appear at a festival Wednesday in Penticton, B.C. but that appearance has been cancelled. In addition, it is unlikely the team will take part in the airshow at Abbotsford, B.C. this weekend, Department of National Defence officials added.

On Tuesday a Snowbirds’ Tutor aircraft was taking off from the airport in Fort St. John, B.C. when an “incident” occurred, according to the military. “The aircraft was able to land, but suffered some damage in the process,” the Canadian Forces noted in a statement. “The sole occupant (pilot) did not sustain physical injuries and is being assessed by medical personnel.”

An investigation released last year into the crash of a Snowbirds aircraft in 2020 in Kamloops, B.C. concluded that the plane lost power after a small bird was sucked into the engine shortly after takeoff. That incident on May 17, 2020 claimed the life of Capt. Jenn Casey and injured Capt. Richard MacDougall. The investigation found that Casey and MacDougall ejected from the aircraft at low altitude and in conditions that were outside “safe ejection seat operation parameters.” Because of that, the parachutes did not have the required time to function as designed.

The Canadian Forces is in the process of modernizing the Tutor aircraft. Last year the federal government launched a $30 million project to upgrade the planes so the aircraft can be used by the Snowbirds until 2030. The project will modernize the aircraft with new avionics and instrumentation to ensure compliance with federal air regulations. In parallel, a separate project was launched to improve the aircraft escape system through upgrades to the current parachute and harness design.

The federal government, however, is facing a potential dilemma in replacing the aircraft. Government officials have indicated they want the aerobatic team to continue operating, noting that the Snowbirds is seen as a key public relations tool for the Canadian military.

But some in the Canadian Forces have privately questioned spending money on the Snowbirds because they do not directly contribute combat capabilities to the air force.

In addition, a replacement for the Snowbirds could cost up to $1.5 billion, a significant expense at a time when the federal government is being pressured to do more in health care and other areas directly affecting the lives of Canadians.