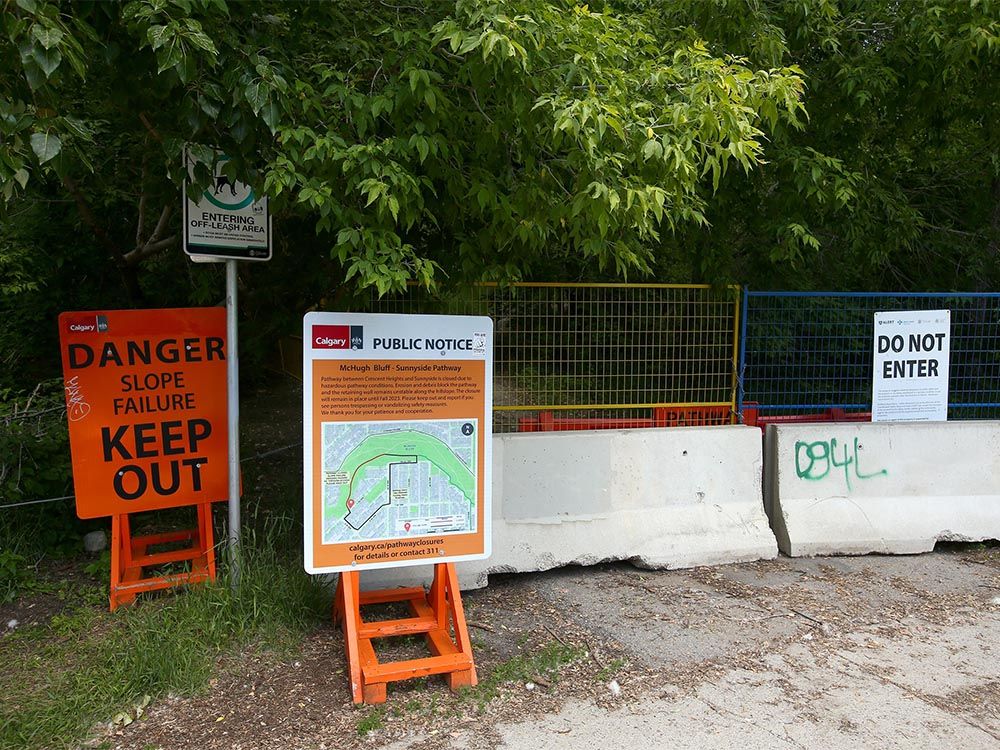 Slope instability and damage to a stone retaining wall on Calgary’s McHugh Bluff is putting six nearby homes at risk of property damage, according to the area’s city councillor.

That’s part of what’s behind the city decision to close a McHugh Bluff pathway connecting the inner-city communities until fall 2023, Wong said.

“We don’t want to see any of our houses damaged to any extent whatsoever,” he said. “That portion of pathway is definitely at risk … The city chose to close down the slope, and similarly to continue to keep it closed.”

Fences and cement barriers block off the impacted path, and posted notices warn against entry, including one which says the area has been “deemed dangerous to public safety.”

The city has said the long-term closure of a pathway on the bluff is necessary due to “hazardous pathway conditions,” with erosion and debris blocking the path, while the slope’s retaining wall is considered unstable.

Officials confirmed this week dirt and vegetation which slid down the McHugh Bluff slope during an August 2021 rainfall accumulated around the retaining wall adjacent to a pathway, causing the wall to shift and lean. Repairing that wall is among long-term work expected to begin next year. No “significant” cracks to the pathway were observed, the city added.

Last week, the city issued evacuation notices to two homes due to concerns about slope stability from the heavy rain. No damage occurred and those residents were allowed to return to their homes Tuesday after the city said the slope showed no further deterioration, adding “there is no imminent danger to any properties at this time,” with no significant rainfall in the forecast.

Harvey Cohen and Linda Kitchin own one of the evacuated properties, a Sunnyside home at the base of the slope.

The couple lived in that home for 38 years, recently moving out for reasons unrelated to the McHugh Bluff instability. They found they were unable to sell their home at market value due to city fencing around the property, however, and instead rented the home to a young couple. Those tenants were forced to evacuate during last week’s rainfall, and given only a short window to leave the home and find another place to stay.

That experience mirrored one Cohen and Kitchin faced last winter, when they were evacuated amid slope failure concerns and weren’t provided with any help finding a place to house themselves and their pets in the interim.

“The city is totally unprepared to put anybody up,” Cohen said.

“It’s their hill and it was obvious it was going to go. For years and years, we’d been telling them to do something.

“It’s so totally unfair. We might lose our tenants because of this. This is not good,” Kitchin added.

The couple said they aren’t particularly worried about any active risk to their property from slope failure, but that they want the city to ensure the community’s historic homes adjacent to the slope retain their value.

About 20 years ago, prior to the construction of a retaining wall, their backyard sustained damage in a landslide. In 2004, soon afterward, city council approved a $315,000 plan to deal with erosion and instability concerns in the hillside park.

The city is now moving forward with new plans to remediate the current slope failure, triggered during that August 2021 rain, presented to council’s executive committee during a closed-door meeting last month.

Council approved that project, including a funding request, with plans to tender the contract this summer and award it this fall so work can begin in 2023 and end in fall of that year.

Wong said he’s satisfied with that timeline, given the necessity to give bidding firms a chance to evaluate the project and present plans to the city, adding work would have to begin after next winter’s snow melts.

He said council approved funding for the remediation which represented an “upper limit” of its possible cost, but that he was unable to disclose the dollar value.

The situation echoes back to another recent slope stabilization project, when the city spent an estimated $28 million to shore up a 3.5-kilometre section of pathway that threatened more than 24 homes in the southeast communities of Douglasdale and McKenzie Lake; the cost was only made public after the fact.

Wong said the two situations aren’t comparable, however, due to the scope of work and the properties implicated.

The city said in a statement it is monitoring McHugh Bluff twice each week, and more frequently when weather conditions necessitate, including during last week’s rainfall.

It said short-term repair work will include filling and covering erosion gullies with rolls of coir mat, a measure they expect to slow slope erosion.

“Given the presence of wet soil along the slope surface, it will be ensured that the slope surface is not excessively disturbed during placement of coir mats,” the city said. “We already have a contractor ready to do this work, we are just waiting on site conditions to improve.”

Longer-term work, to begin next year, is slated to include installing infrastructure such as soil nails, sheet drains and horizontal slope drains, as well as reconstructing the existing retaining wall.

In an email statement, Rosedale Community Association president Laura Margetts said her group met with Wong and city officials to discuss the McHugh Buff situation a few weeks ago.

“Like everyone who lives near the McHugh Bluff, the RCA board is concerned about the slope stability and the timeline for reopening of the pathway,” Margetts said. “Our request from the City was that they provide timely and regular communication regarding the project, which they agreed to do.”

Wong stressed council and administrators are keeping a close eye on the McHugh Bluff situation.

“We certainly don’t want to see any loss of property,” Wong said, adding he doesn’t want to see a landslide like that which occurred in Saguenay, Que., earlier this month, destroying one home and forcing more than 100 residents to evacuate.

“What we saw in Quebec this past weekend was devastating enough to watch (thousands of) kilometres away. We don’t need it in our backyard.”

Despite its steep terrain, McHugh Bluff — named for Felix McHugh, Calgary’s first settler on the north side of the Bow River — is among Calgary’s most popular parks.

The history of the lush space predates the city, however. A 1970s paper called Hillhurst Sunnyside Remembers notes the hill was thought to once be a buffalo jump, with residents sometimes finding bison skulls in the area.