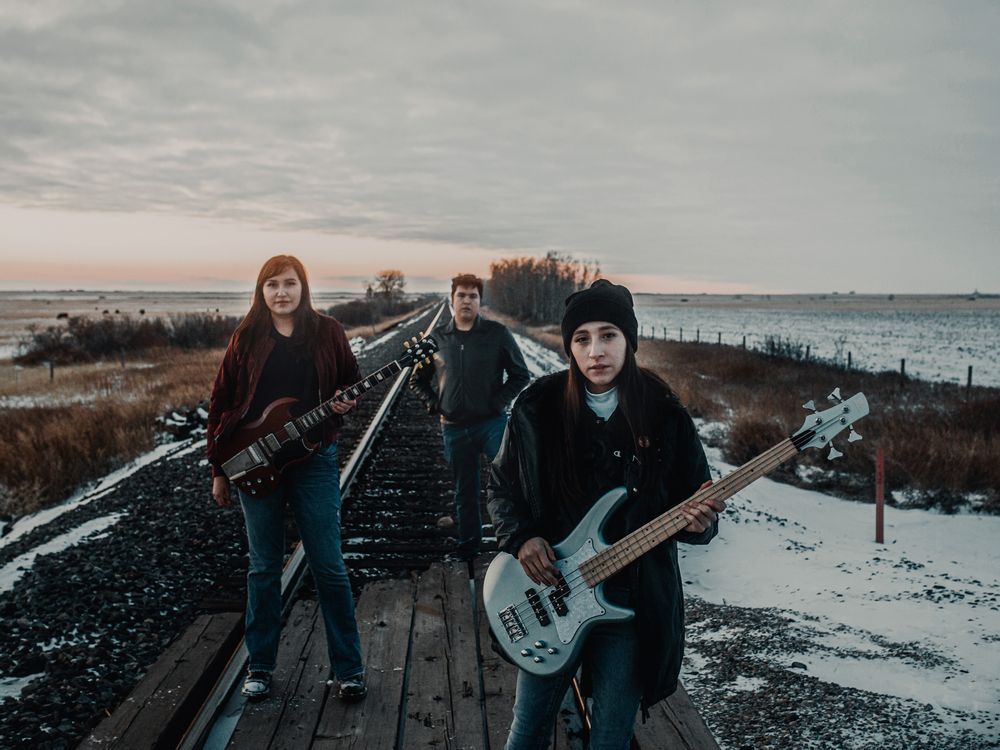 When Hannah and Lennon Owl Child and cousin Erin Manyheads were growing up in the Siksika Nation, musical instruments were not hard to come by. Their basements were full of them.

Playing music has been a family tradition that dates back to the 1960s, when the trio’s grandfather, Matthew Manyheads, built his guitar at the age of 14 before forming a number of bands.

Hannah was also 14 when she began playing guitar. Lennon was 13 when he discovered the drums. Erin was 12 when she picked up the bass. It was the earliest incarnation of what would become Double Rider.

“On New Year’s Eve, we’d have these gatherings and our parents and our grandfather would do a little jam session,” says Hannah. “Every New Year’s, we were always around loud, live music in our own basement. By the time we reached the early teens, the typical teenage shenanigans – we’d watch TV, play outside – got boring for us and we wanted something different. Where Erin lives, in the basement were all the instruments from our parents and grandfather. One day, we just decided we’d check it out and see what we could do. From there, every day during the summer, we’d go downstairs and turn on the instruments and try it out.”

The first song they learned was Creedence Clearwater Revival’s Bad Moon Rising, the sort of song that both their parents and grandfather would have played in their classic-rock bands.

That was almost a decade ago. In 2014, they had their first show at a music festival in the Siksika Nation, initially introducing themselves as Third Generation. It wasn’t long before Matthew Manyheads, who had dedicated much of his life to music, began paying attention. In 2016, he introduced his grandchildren to a treasure trove of original material he had written dating back to the 1970s.

“He performed quite a lot in the 1970s, toured around Alberta,” says Erin. “He knew we were really interested and passed along his songs to us and gave us the go-ahead to perform them as something different than covers.”

Three of those songs make up Double Rider’s self-titled debut EP. Among them is the debut single Echoes of the Past. Sung by Lennon as an anthem of pride and defiance that traces the history of the Blackfoot, it begins with powwow drumming and a warrior’s cry.

Matthew Manyheads, who died in 2020, was a residential school survivor who used music as a release. But early on, he tended not to write political songs or about his hardships. That changed after the Oka Crisis, a land dispute in 1990 between a group of Mohawk people and the town of Oka, Que. It stirred something in Manyheads, inspiring him to write Echoes of the Past.

“He needed to say something, to just let it out the best way it could, which was through music,” Lennon says.

The EP also includes the alt-rock leaning Everyday and the acoustic ballad Walk With Me, both beautifully sung by Hannah. The trio is delving into more of their grandfather’s songs and working with Calgary’s Major Minor Music Project, a non-profit production organization that specializes in working with young bands, towards a full-length album that will mix their grandfather’s songs with originals.

“I think one of our goals of the band is to get the Indigenous voices out there and raise awareness of Truth and Reconciliation and the Indigenous people’s history throughout Canada, as that is Canadian history,” Erin says. “I think one of our messages is to let people know that we are still here and we are still strong. We’re young and I think it’s a good opportunity to get that out there through music.”

Alongside classic rock, the three also grew up surrounded by traditional Indigenous music and hymns and would go to powwows.  Erin was a powwow dancer, something she hopes to continue and eventually introduce to her son.

While the band members are now all in their early-20s, Double Rider began when they were teenagers. Many of the early shows were all-ages, usually presented in various venues by Major Minor. The band will play an all-ages show on the Broken City patio as part of the Big Winter Classic on March 26.

While Echoes of the Past and Walk With Me were written in the 1990s, Everyday and a number of songs that Double Rider is tackling date back to the 1970s.

“We really picked up on the energy he had back then,” Lennon says. “I find the energy back in the ’70s was pretty intense with music. We appreciated the quality of the tapes he recorded and his voice. Even the lyricism that goes into the music really grounds us in a certain view, not just from a biased view but from a musical view. it’s very touching.”

While Manyheads was not able to hear his grandchildren’s final recordings of his songs, Lennon says he was able to see them live on a number of occasions.

“He was very proud of us and he liked the way we did the songs,” he says.

Double Rider play the Broken City patio on March 26 as part of the Big Winter Classic.