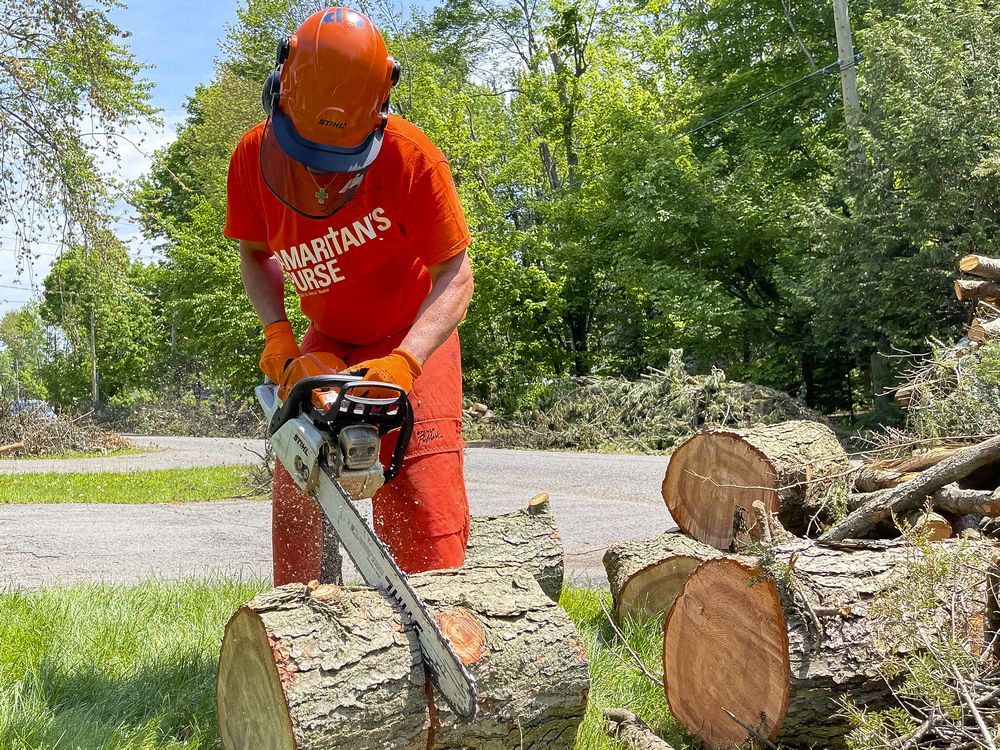 If, as the Bible says, God “put the cedar in the wilderness,” it’s the volunteers with Samaritan’s Purse who cut it up and haul it to the curbside for pickup.

When the devastating May 21 derecho storm system swept across Ottawa, toppling cedars and pines, maples and willows, the Christian charity Samaritan’s Purse was among the first to answer the call for help. From its mobile base set up in the parking lot of the Metropolitan Bible Church on Prince of Wales Drive, Samaritan’s Purse co-ordinates the work of volunteers helping homeowners clean up their properties.

“Municipalities can’t go on to personal property. They don’t have permissions and it’s not really part of their purview,” said Tammy Suitor, a Calgary mother and grandmother who is overseeing Samaritan Purse’s operations in Ottawa.

Suitor has about a dozen volunteer staff from across the country who act as leaders for the teams of volunteers she dispatches across the city. When homeowners call for help, the call goes to the enormous converted NASCAR trailer, the Disaster Relief Unit that serves as Samaritan’s Purse office, supply shed and tool shop. The calls are prioritized, then a team dispatched to help.

Andrew Murphy, an intern at the Met church, was part of a team of about 10 orange-shirted Samaritan Purse volunteers removing a downed pine from a backyard on Edenbrook Court in the Country Place neighbourhood off Merivale Road. Murphy, himself, was without power for 60 hours after the storm, but didn’t hesitate to volunteer elsewhere.

“It’s just one more way for me to show the love of Christ to other people,” Murphy said, as he dragged branches and logs to the street for pickup by city crews. “It’s very uplifting to see.”

In the backyard, other volunteers worked away with chainsaws to cut the once-towering pine into manageable pieces, carefully muscling it clear of a fragile ornamental bush.

It’s hot, sweaty work, but team leader James Bolleyn of Leamington, Ont., was on hand to ensure it was done safely and correctly. There are limits to what his volunteers can do.

“If a tree is on a house or if it’s against power lines, we can’t touch it,” he said. “That’s something for the insurance companies.”

Bolleyn started working with Samaritan’s Purse a few years ago while helping clean up from flooding in Essex County. He realized it was humanitarian work that he wanted to continue.

Homeowner Subadra Kappagoda said she called Samaritan’s Purse for help after finding one of its flyers hanging from her doorknob. Kappagoda and her husband, both 84, watched the storm hit and saw the big tree fall.

“We are just so grateful,” she said. “They’ve been wonderful. And we’ve had lots of help from our neighbours too.”

It’s not the first time Samaritan’s Purse has deployed to Ottawa. The charity helped with the cleanup after the 2019 flooding and the 2018 tornadoes. Teams were deployed last year to B.C., first after forest fires, then for flooding in the Lower Mainland. They helped after wildfires in Fort McMurray, Alta., and hurricanes in Atlantic Canada.