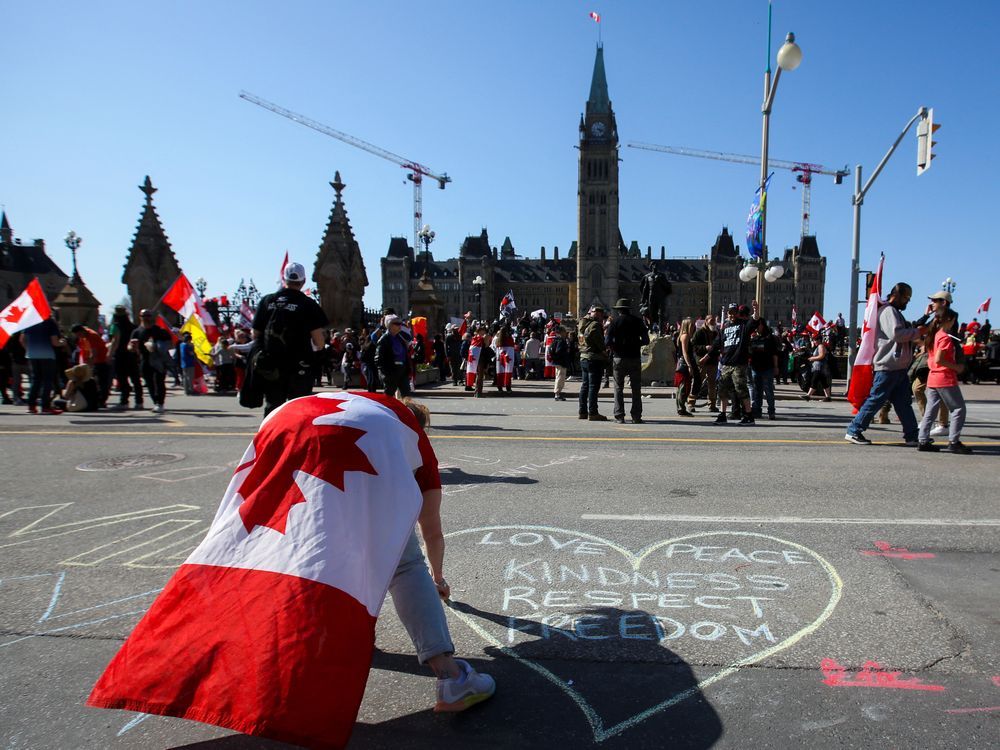 Along with the flag and the word freedom, the big, malodorous movement that came to Ottawa on the weekend co-opted the ‘L’ word.

I should have been feeling the love.

I had been feeling it as my partner and I left an event at the Ottawa Art Gallery late Friday afternoon fêting the launch of a book by friend, immigration law expert and Ottawa University professor Jamie Liew. Her book, Dandelion, is inspired by the experiences of her parents and other immigrants as it explores what it means to be stateless, the elusiveness of a sense of belonging. It was a multicultural, expansive and mostly masked event that left us feeling buoyed, grateful to be part of that community, this city.

We should have called it a night and floated home on those good vibes, joined friends for dinner. But no. Well-baffled by our little bubble, we felt we should stroll by Parliament Hill to check out the Rolling Thunder demonstration that was just gathering steam for a weekend of what had all the appearances of one more big, raucous street party in the making.

For a protest promising peace, love and freedom, I just wasn’t feeling it. Lots of people were saying it, but somehow “I love you” snarled through big, mocking smiles sounds a whole lot more like, “hey, F*** you.”

“I love you,” a gaggle of teenaged girls catcalled as they strode up to the Hill to join the demonstration. “Yes, you, wearing your masks outside. We love you. Have a good day,” one sneered.

There were more cheers that sounded a lot like jeers as a squad of motorcycle cops purred along Wellington Street, parking hard by the demonstration. “Thank you. We love you,” some flag-waving protesters shrilled. Maybe they do, but I wouldn’t have been doffing that riot gear (protective gear?) any time soon.

I guess my partner and I had it coming. We drew that ire because we chose — on a mild, spring afternoon — to keep our masks on although I was less fearful of being exposed to COVID-19 than I was of someone thinking we were part of the so-called “freedom fighters.” Much like draping the Canadian flag around your shoulders, or cinching it around your waist like a fanny pack, has become an easy way to say you’re with them. By the way, that ball cap with the big red maple leaf on the bill you like so much? If you’re not one of the demonstrators, you might want to leave that in the hall closet for a few weeks. Maybe months.

So along with the flag and the word freedom, this big, malodorous, stick-to-your-heel movement has co-opted the “L” word. No surprise there. From the outset, they have been telling us they are doing this for our own good: fighting for our freedoms; re-claiming national monuments on our behalf; going to war against our oppressors because we didn’t even realize we are oppressed.

Now can you feel the love?

Becky Rynor is a journalist based in Ottawa.