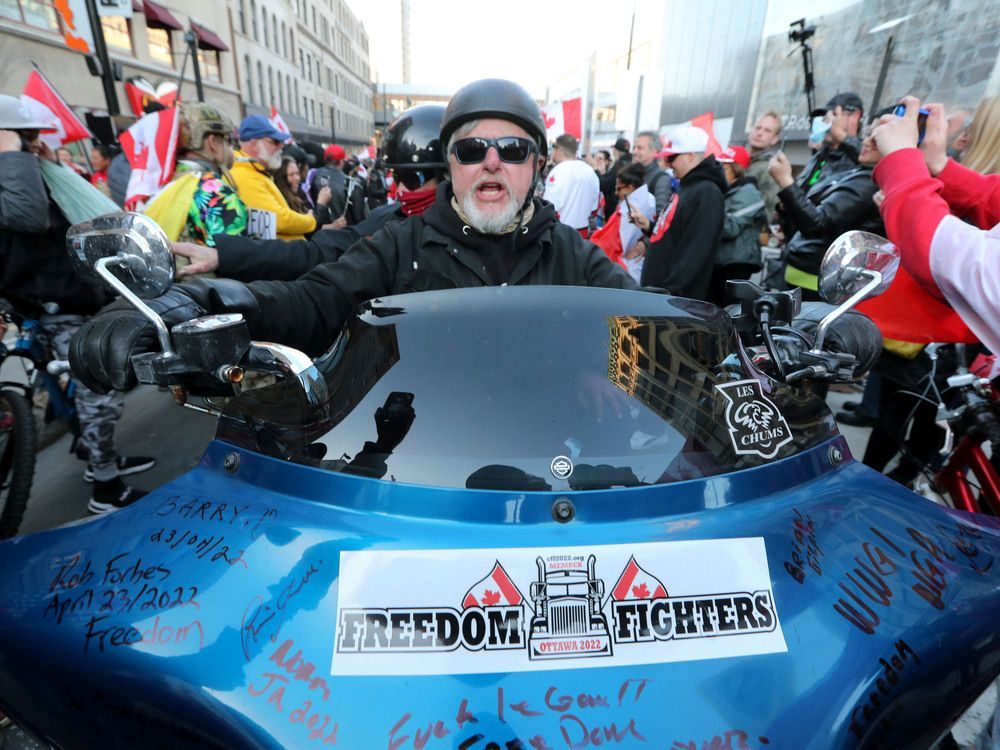 If the “Rolling Thunder” rally on Parliament Hill on Friday was an accurate preview of what Ottawa residents could expect, this weekend will not be a replay of this winter’s “Freedom Convoy.”

Crowds on Wellington Street were sparse and most of the lawn in front of the Parliament Buildings was empty as speakers pumped out Journey’s Don’t Stop Believin’ and Neil Young’s Rockin’ in the Free World. (Ironically, Young asked that his music be removed from the music streaming platform Spotify in January because he didn’t want to share a platform with ant-vaxxer Joe Rogan. Many in the crowd oppose vaccination and masking.)

Some demonstrators wore “We the Fringe” sweatshirts. One man wore a yellow Don’t Tread on Me flag as a cape. Another man wearing a Freedom Fighters of Canada sweatshirt sported a tinfoil hat. But the scene lacked the energy of the occupation that had Ottawa in its cacophonous grip for three weeks this winter.

The city and police have warned visitors this week they won’t tolerate a reprise of the “Freedom Convoy.” Noise, litter, fireworks and stopping bylaws will be enforced. Vehicles failing to observe no-stopping zones will be ticketed and towed. Bylaw officers will also enforce bylaws forbidding unnecessary vehicle noise, including speakers, as well as open fires and public urination and defecation.

“It will be interesting to see how the police behave,” said one woman on Parliament Hill, who declined to be named.

“They have set a tone already with their ridiculous new rules and regulations and blocking the streets. They’re up to their old tricks, I guess. We’ll see how this goes,” she said.

“My expectations coming out here was just to spend a weekend in Ottawa,” said another woman from Sudbury, who also declined to be named. “We’ve been on the road all day. So I really don’t know what’s going on. We’re just here to share some freedom and love.”

But the situation was fluid and incidents bubbled up. Shortly after 7 p.m., a flag-waving crowd marched from Parliament Hill to the ByWard market. Police reported that the crowd had become more aggressive and more officers equipped with helmets and shields were being deployed.

Police also reported that some streets around Parliament Hill were closed to all traffic except emergency vehicles.

Around 9 p.m., police reported that several arrests had been made on Rideau Street. As well, police said several vehicles had attempted to occupy a downtown parking lot, but all but one of them left the area and the remaining vehicle was towed.

Joao Velloso, who teaches criminology and socio-legal studies at the University of Ottawa, studies the dynamics of protests and did field work during “Freedom Convoy.” He also checked out Parliament Hill on Friday.

Velloso estimated there were less than a thousand people there for the rally, including journalists and police officers. Without the transport trucks associated with “Freedom Convoy,” Friday’s event had a smaller footprint, he said.

This time, the policing apparatus is very different, Velloso said. He noted that police had been quick to intervene and visitors had been warned up front that vehicles were not welcome.

The “exclusion zone” for vehicles includes the area near the National War Memorial, where a “Rolling Thunder” ceremony is planned for Saturday morning.

Saturday’s planned events include the ceremony at the National War Memorial, with bikers gathering at St. Laurent Shopping Centre at about 9 a.m. before making a loop through the city, followed by the service at the war memorial, according to Live From the Shed, a Twitter feed that has been promoting “Rolling Thunder” events.

According the plan, the motorcycles will follow a route down Montreal Road, Rideau Street and Waller Street before heading across the Mackenzie King Bridge, turning south on Elgin Street, east on Laurier Avenue West, down Nicholas Street and onto Highway 417.

According to Live From the Shed, motorcyclists are to leave the National War Memorial at about noon.

Earlier this week, acting police chief Steve Bell said downtown streets would be closed to vehicles that were part of “Rolling Thunder” events.

Bell said police preferred an approved route rather than allowing the bikers to drive around in an unorganized way and both Bell and Mayor Jim Watson assured residents they would not allow a repeat of the “Freedom Convoy” protest.

A rally has also been scheduled for Parliament Hill at about 2 p.m. Saturday with “special guest” Chris Sky, a prominent anti-mask and mandate protester has been arrested multiple times across Canada. “Rolling Thunder” organizer Neil Sheard has distanced himself from the rally featuring Sky.

Another group called the “Ottawa Unity Chain” says its members plan to line the streets, wave flags and form a chain.

Posts on the group’s Facebook page say the organization is independent from “Rolling Thunder,” but they have spoken about how to help each other. Some participants are expected to head down to the Parliament Hill rally on Saturday afternoon.

People from several communities outside Ottawa have formed “convoys” to come to the national capital for the chain, but it was unclear as of Friday how large the event would be. The goal, according to the group’s Facebook page, is to “to spread as much peace love and patriotism to fellow Canadians as possible.”

The group has asked people to go to  designated streets around noon on Saturday and to wave flags. At 1 p.m., they are to join hands and sing O Canada. At 1:15 p.m., there will be a moment of silence for “world peace.”

Some events already planned, but have nothing to do with “Rolling Thunder” will be going ahead this weekend.

Earlier this week, the CHEO Foundation asked demonstrators not to disrupt CN Cycle For CHEO, a childhood cancer fundraiser on Sunday at the Canadian War Museum and LeBreton Flats. This year was to mark the first time the event would be held in person since 2019.

With files from Postmedia staff