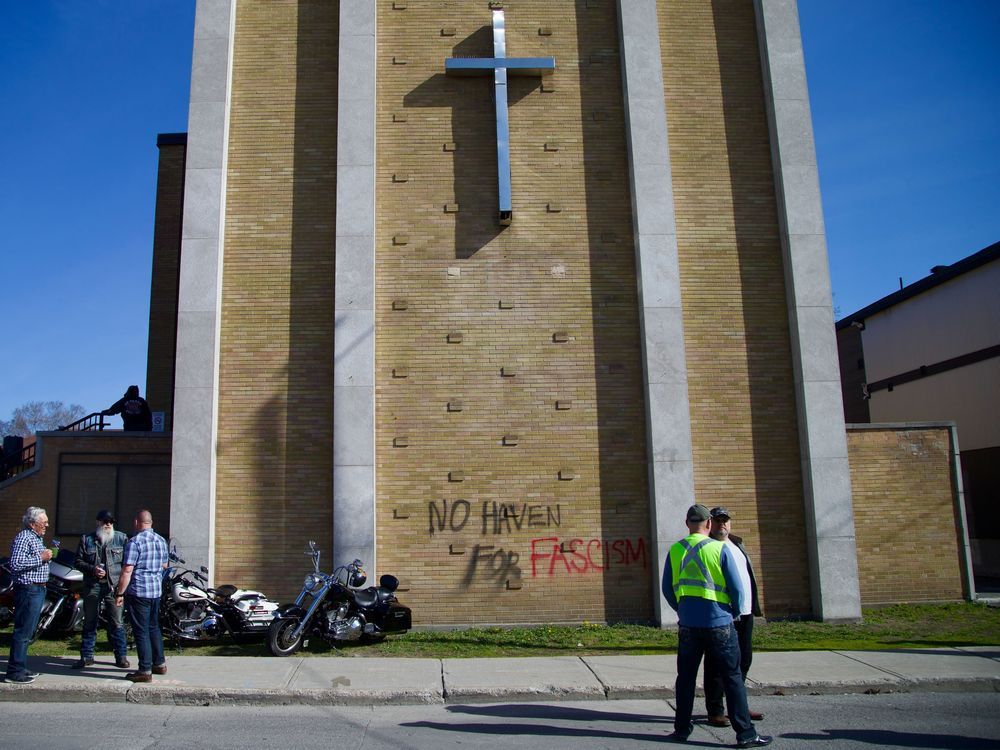 Ottawa Police are investigating “hate-motivated mischief” after graffiti was scrawled on a church where a service is being held Sunday morning as part of the “Rolling Thunder” weekend.

The words “no haven for fascism” were painted on the sides of the Capital City Bikers Church on Carillon Street in Vanier.

The church service there Sunday was listed as the final scheduled event in the three-day “Rolling Thunder” in Ottawa this weekend.

“Rolling Thunder” featured a motorcycle ride and ceremony at the National War Memorial on Saturday and rallies on Parliament Hill both Friday night and Saturday afternoon to protest COVID-19 vaccines and public health measures that prevent the spread of the virus such as mandatory vaccine policies and mask wearing.

Police are investigating an incident of hate-motivated Mischief at a religious institution located in the 100 block of Carillon Street that was reported to us just before 7am this morning. The Hate and Bias Crime Unit investigation is ongoing. Info? 613-236-1222 #ottawa #ottnews pic.twitter.com/GPYeCNFyd3

Ottawa Police said the “hate-motivated mischief” at the church was reported just before 7 a.m. on Sunday.

The pastor and his wife at the Capital City Bikers Church were supportive of the “Freedom Convoy” protesters who demonstrated in Ottawa in January and February, occupying downtown streets for three weeks.

Last winter the church was a flashpoint of controversy in its Vanier neighbourhood because of its  staunch support for “Freedom Convoy” participants, offering them hot meals, a place to warm up and moral support.

In February, some Vanier residents who disapproved of the presence of Convoy protesters  posted pro-vaccine and anti-Convoy signs on a fence near the church. The church also received a more menacing sign on red paper that read: “A nest of Nazis. Burn it out.”

The church service, which starts at 10:30 Sunday, was advertised by the Rolling Thunder organizers.

The 350 motorcyclists who participated in a ride-by downtown on Saturday and demonstrators who took part in rallies on Parliament Hill on the weekend are expected to leave town later Sunday with the close of “Rolling Thunder.”

Ottawa Police said they shut down three off-ramps leading to the downtown on Saturday to help control crowds.

Three people were arrested on Saturday, Ottawa Police said in a release.

A woman was arrested for assaulting a police officer on Elgin Street midday.

A man was arrested Saturday afternoon for breaching conditions stemming from the “Freedom Convoy” occupation in February, said the release.

And a male driver was arrested after he rushed an OPP motorcycle at a checkpoint, said the release. That man was also on conditions stemming from the February occupation. He faces “several charges, including breaching release conditions, dangerous driving, refusal to provide a sample, assault on a peace officer and assault with a weapon,” said Ottawa Police.

In addition, one of the vehicles that had been towed away on Saturday tried to come back into the city, but was intercepted by police, said the statement. The vehicle was inspected by  Ministry of Transportation officials, deemed unsafe, and removed from the road, said the release.

Ottawa Police also said late Saturday that several convoys and groups had been spotted outside Ottawa, but their intelligence indicated many convoys chose not to come into Ottawa, “based on the police operational posture.”

Police officers were out in force all weekend.

with files from Peter Hum