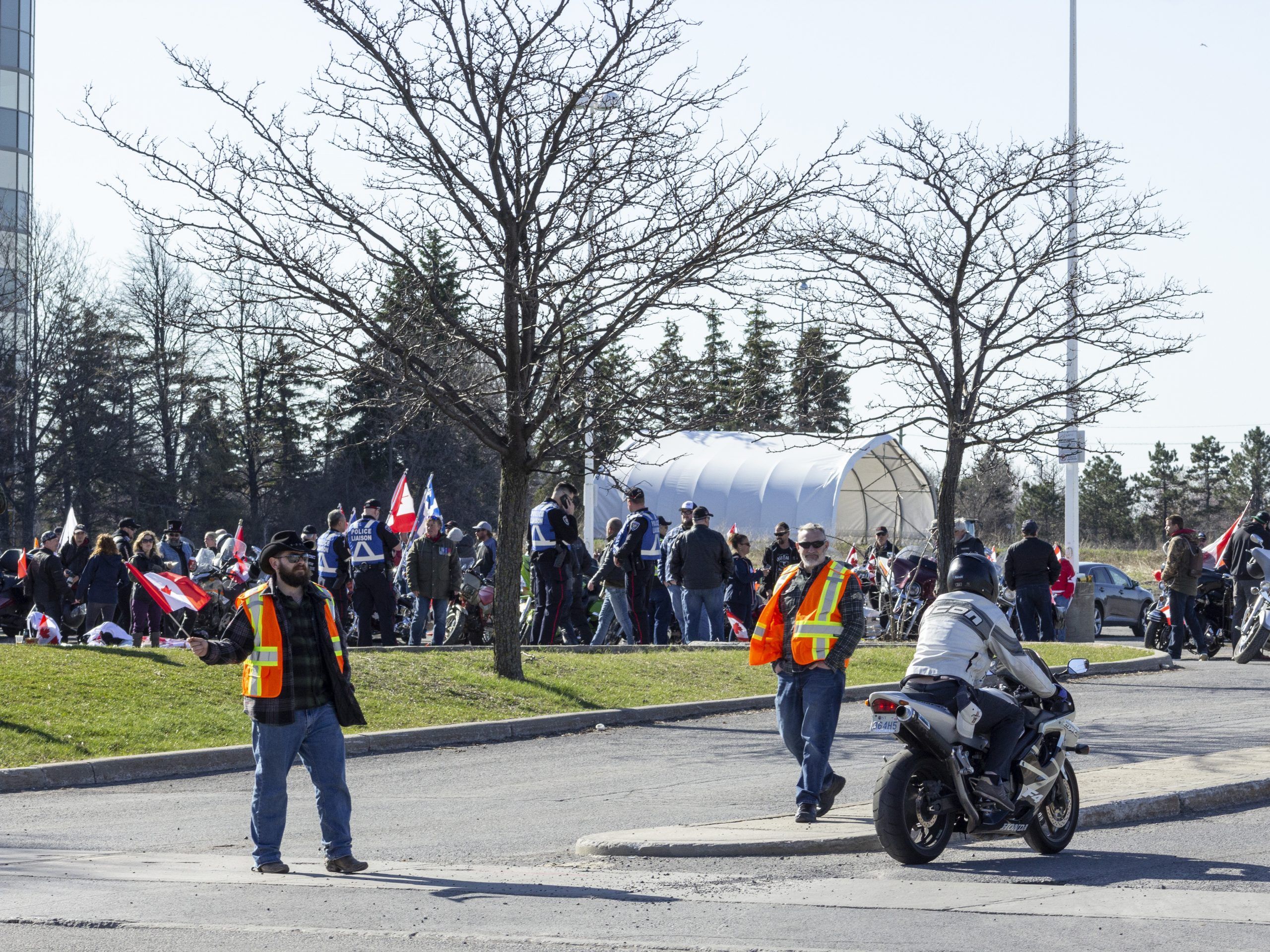 Small groups of protesters and counter-protesters gathered at the War Memorial Saturday morning.

Organizers first asked supporters to take down the “F*** Trudeau” flags, because “we want to be an example to young people.”

Organizer Neil Sheard told the crowd “We are (dealing) with an information war, plain and simple.”

“If there is any mainstream media out there, you need to start telling the truth,” he said to loud cheers.

The “Rolling Thunder” protest moves into its second day Saturday with a number of events in the downtown area.

Bikers began gathering at St. Laurent Shopping Centre at about 9 a.m. to prepare for a driveby at the War Memorial to honour Canada’s war dead.

The bikes are expected to pass the memorial around 11 a.m. By noon, to head out of the city.

The other main event is a rally at 2 p.m. on Parliament Hill organized by the Freedom Fighters of Canada group that will include speeches from anti-vaccine/anti-mandates speakers.

Provincial police said in the morning that a number of exits on the Queensway were shut down until further orders.

Police have said more than 500 motorcycles and vehicles are expected to participate in the event this weekend. The organizing group hasn’t been clear about the goals of the rallies, but said on its website it will “spread as much peace, love and patriotism to your fellow Canadians as possible.”

#OTTAWA ADVISORY: #Hwy417 wbnd ramp to Bronson and ebnd to Kent are closed until further notice. Starting @ 10am Hwy417 exits wbnd @ Vanier and ebnd and wbnd at Nicholas will be closed temporarily. Potential for additional closures. Be aware of potential slowdowns. #OttTraffic pic.twitter.com/kG9e5AFHYX

On Saturday, Ottawa Police asked for public assistance in identifying a woman in connection with an unspecified ‘incident’ with police on Rideau Street.

Investigators are asking for the public’s assistance in identifying this woman in relation to an incident with police on Rideau St. last night. 613-236-1222 ext. 5166#ottnews pic.twitter.com/uPlJ5zfndF

The activities follow a strained Friday night that saw at least seven people arrested in a confrontation on at the Rideau Centre.

Police described the crowds around Rideau and Sussex as “aggressive and combative.”

Officers donned crowd control gear, including helmets and shields, and control was restored by about 9 p.m.

There were at least seven arrests and three vehicles were towed.

There were no injuries reported.

Meanwhile, in an update, police said demonstrators attempted to use strategies to try to lure authorities away from the downtown “exclusion” sector.

At one point a number of vehicles blocked the Lees Avenue exit, causing traffic backups out onto the Queensway.

Multiple arrests happened at this location, as well as three vehicles towed.

“Plans developed over the last few weeks were effective and will continue through the weekend,” OPS said. “While dealing with these demonstrations, calls for service were responded to across the city.”

Investigative teams, including the Hate Crime Unit, are also in place and are focused on gathering evidence and laying charges, police add.

“Our plan remains focused on public safety, maintaining the right to participate in events and enforcing all applicable laws. We continue to monitor online and open-source commentary related to all events.”

The operation will continue until the demonstration and events are complete, and police will remain in place overnight, OPS add.