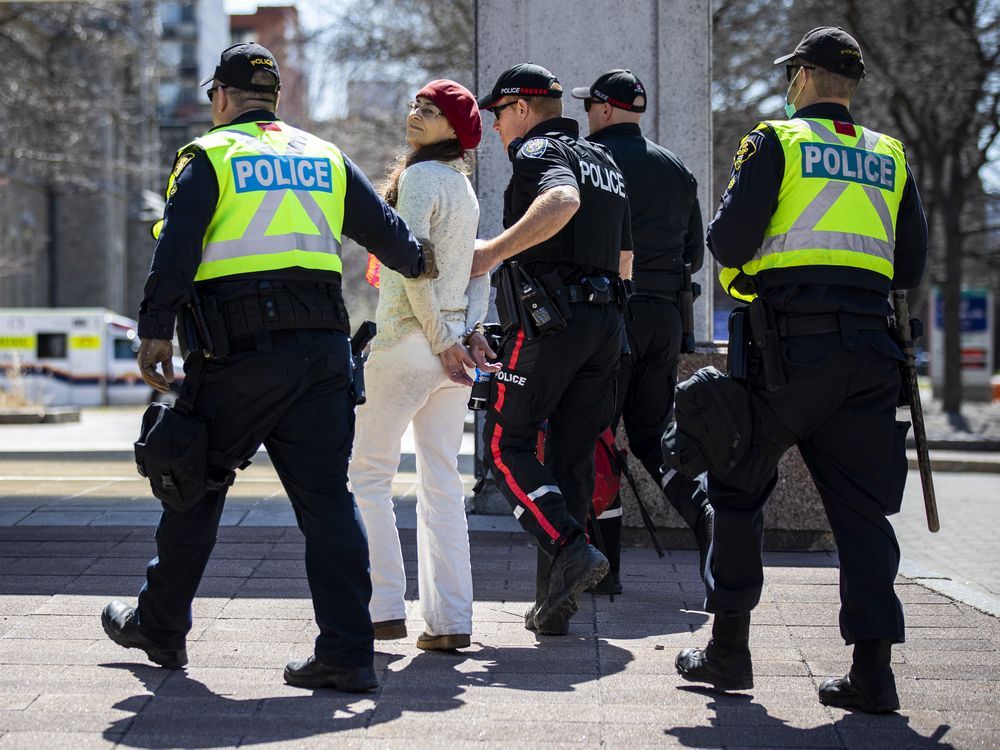 It wasn’t Occupation 2.0, but there were plenty of echoes of the February protests that shut down Ottawa for weeks on Saturday as crowds gathered downtown for the “Rolling Thunder” rally amid a heavy police presence.

But this time police took quick action, ticketing and towing vehicles in an exclusion zone and arresting some participants just hours after they began arriving in Ottawa.

Mayor Jim Watson, who was downtown Saturday morning, commended police for taking a “firm stance,” especially on Friday night, when they issued hundreds of tickets, towed 20 vehicles and arrested seven people after reporting an escalation of aggression at the intersection of Rideau Street and Sussex Drive, where a crowd had gathered.

“We are not going to repeat what we saw in February. That is why you see the tow trucks here ready to go. They came in very handy (Friday),” Watson said.

“We saw last time around everything from dancing on the Tomb of the Unknown Soldier to urinating at the cenotaph to defacing the Terry Fox monument. There is an element that need to be held to account, and I think the police have taken a much more no-nonsense approach.”

Watson said he expected police would face “some challenges” with the crowd on Saturday night.

Like January and February, there were people laden with flags and chants of “freedom” amid speeches, ceremonies and a biker drive-by early on Saturday. There were also families with children and people handing out flags, air horns and people with bullhorns.

A man dressed only in a thong and carrying a sign saying “Treason Trudeau Got 2 Go” posed for pictures with members of the crowd.

Many said they were there to protest the oppression of vaccine mandates and lockdowns.

“I still cannot travel. I am a prisoner in my own country,” said Annamieka Baker-Sweet of Pakenham.

During a ceremony at the National War Memorial, organizers asked a crowd of up to 1,000 people to take down any “F— Trudeau” flags — which were ubiquitous during the February occupation — out of respect. “We want to be an example to young people.” Later, along Elgin Street, hats and bandanas saying F— Trudeau were being sold.

Veteran Chris Deering, who laid a wreath at the National War Memorial, described the convoy as “a chance to heal after two years of nonsensical dictating.”

One speaker said the only reason provincial mandates were lifted was because of the convoy protests. Many decried the media for depicting protesters in the “Freedom Convoy” as criminals, saying they were and still are peaceful.

Counter-protesters, with signs that included one saying: “Another shitty rerun,” were also out on Saturday morning.

Military veteran Clayton Goodwin, who led a group of counter-protesters, said he disagreed with the way the “Rolling Thunder” rally was politicizing the cenotaph.

“You want to try to look valid by attaching everything to veterans. It sounds like a big grift to me,” he said of the events.

One Ottawa woman, who asked not to be named, was in tears after finding herself in the middle of the flag-waving, noisy crowd Saturday on her way to an appointment.

“I think I was just overwhelmed,” she said. “I didn’t expect to see so many people.” She stopped to warn a woman pushing a stroller down Elgin Street to take another route.

“The police certainly are better prepared. The crowd is here, able to protest. The convoy itself was managed. Nobody was allowed to stay, to park, to occupy any part of the street, and that’s what we asked for. Up until now, I’m certainly not getting concerns from nearby residents.

Watson said he saw “a lot of angry people” while wandering through the crowds Saturday morning, including some who verbally abused him.

“You get into people yelling at you if they recognize you, with name calling and so on. I have tried to turn the other cheek.

“I am not sure what they are all looking for,” he added. “They want to protect our freedom. I think we are one of the freest countries in the world. People have the right to protest, but it can’t infringe on the neighbourhoods and communities where people live, and it can’t be harming our businesses, as they have done.”

Watson pushed for additional police resources from both the federal government and the province in February. Both he and Ottawa police were criticized for the slow response, which resulted in the resignation of Peter Sloly as police chief and replacement of the entire police services board.

With files from Matthew Lapierre