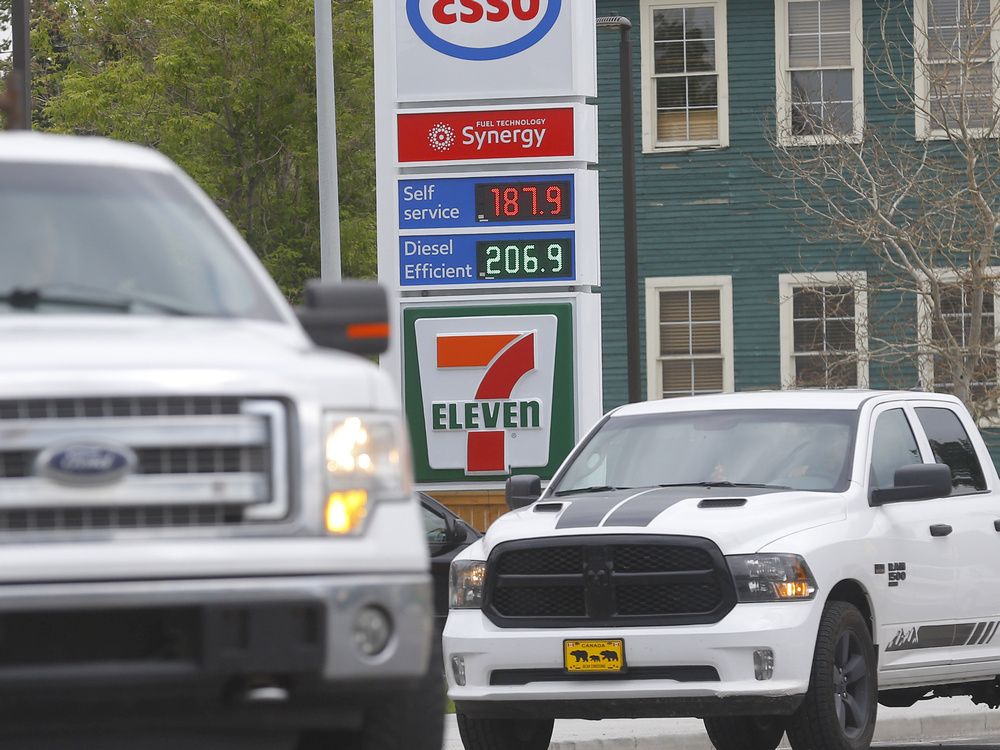 Gasbuddy.com pegged Calgary’s average retail price at 190.5 cents per litre as of Saturday. A handful of stores were offering regular fuel at 187.9 cents per litre in the afternoon.

“This is quite the fleecing,” said McTeague. “It’s not acceptable. And gas stations should be held to account. Those who are charging 191.9 (cents per litre) ought to be accountable for the fact that they’re charging a 32 cent-plus retail margin.”

He said retailers need to charge 10 to 12 cents above cost to turn on the lights and pay staff, while still making a profit, but he found most were charging more than double that.

McTeague did the math based on a rack price of 130.6 cents per litre, which was listed on both Petro-Canada and Shell’s websites for Saturday.

He said retailers then add 11.05 cents for the carbon tax, and 10 cents for the federal excise tax, plus 5 per cent GST. That gets retailers in Calgary a base cost of 159 cents per litre, based on Saturday’s rack price.

He suggested retail costs should be closer to 169 or 171 cents per litre, based on that base cost.

“This is pure and simple gas bars taking advantage of the public to the tune of at least 15 or 20 cents a litre,” said McTeague.

He’s been watching the rack cost drop for weeks, with little movement on prices in western Canada. The rack price for gas peaked at 151.8 cents per litre in Calgary on June 10 and has trended downward since that date. Gas prices have remained at or above 190.9 since June 8.

“Two weeks ago, I tweeted that by next Monday — last week — you should see a decrease of about 10 cents a litre,” said McTeague. “Nothing happened.”

University of Calgary economist Trevor Tombe said he doesn’t think prices are too excessive based on the current data. He said retail margins jump up and down regularly, and the latest swing is within the bounds of past swings.

“Over the past six months, the two-week change in retail margins exceeded 9 cents per litre 15 per cent of the time and then falls. It’s a volatile measure and doesn’t imply a lack of competition,” said Tombe.

McTeague said he isn’t sure current prices have anything to do with the province temporarily lifting its 13-cent-per-litre gas tax on April 1.

“I’m not sure this is connected at all to the gas tax decrease because, for the past few months, they (gasoline retailers) have behaved quite well,” he said.

Gas prices declined in Alberta when the province cut the tax, but other market pressure have since driven the price up even higher.

Postmedia reached out to the province for a response to current prices but did not receive a response.

Speaking in late March, Premier Jason Kenney said the province would be watching retailers “like a hawk” after Alberta dropped its tax.

“We sent a clear message to gas retailers that we won’t accept any games being played with this,” said the premier days before the tax was lifted. “If they don’t pass on these tax savings, if they try to pocket a portion of that, we will be prepared to resort to using legal tools to protect consumers and we are open to potentially bringing in regulatory power to compel retailers to pass on that savings.”