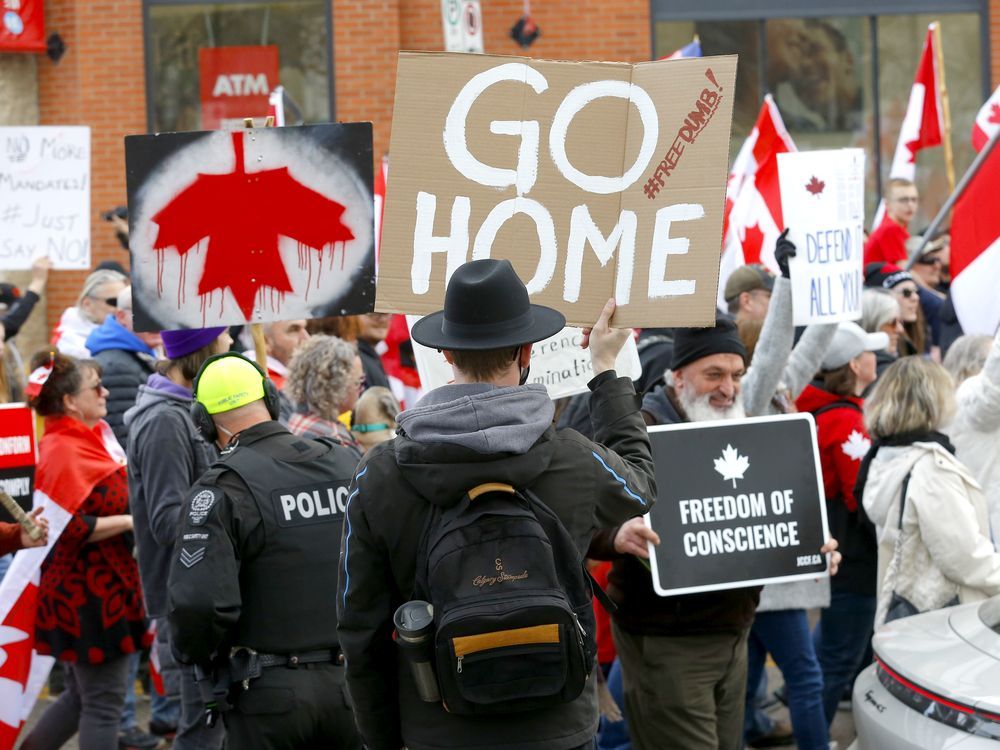 As the loud wall of hundreds of people grew closer, Beltline resident Kevin Schlauch said he wasn’t worried about how the crowds would react to their counter-protest on 17th Avenue S.W.

Schaluch stood with around 35 other people carrying signs that read ‘Read a book’ and ‘I love healthcare workers’ at the 7th Street intersection.

“It feels like they’re forcing us to stay in our homes on Saturday,” Schaluch said, as the sounds of chanting grew louder. “They’re just hypocrites. It’s aggression and terrorism from a very privileged few.”

People gathered Saturday afternoon to show opposition to the weekly, massive demonstrations in the city’s central areas, which residents say have disrupted their lives and created unsafe environments for months.

Thousands of people have been protesting every Saturday in Calgary for several months, marching around streets and avenues to protest COVID-19 public health measures and the federal government.

Despite Alberta Premier Jason Kenney promising to lift mask mandates and most other public health restrictions on March 1, hundreds of people still continued to march down 17th Avenue.

“Whatever measures Kenney does roll back will never be enough for these folks. It also underlines that the real purpose of these events isn’t necessarily to do with COVID. It really does have to do with this sort of broader collection of conservative beliefs.”

Police formed a line along the sidewalk to act as a barrier between the marching crowds and the small counter-protest. A protester with a microphone said “There is no hate here” as another walked by with a sign that read ‘It’s time you got fitted with a new tie Kenney.’

Several protesters walked by the counter-protest and said “We love you, we hope you join us.” Another protester threw a smoke grenade at the group.

“We shouldn’t live in fear, and that’s what the Alberta government wants. If you want to live in fear, that’s your choice,” one person shouted before continuing to march.

Postmedia asked four protesters for an interview, but all of them declined.

Residents who live in the Beltline and surrounding areas say the weekly disruption and barrage of noise has taken away their right to exist and feel safe within the city.

Sitting on a pullout seat in Tomkins Park, 91-year-old Miriam Meir holds a sign that reads ‘This nurse says no vaccination is bad health for the community.’ Meir previously worked as a public health nurse, she said.

“I’m very concerned about the community and all of our health workers, because I know how hard it is to work in a hospital.”

Annette Lenjureo said she believes the majority of Canadians are frustrated with the so-called freedom protests because Canada is already a free democracy.

“They have this sort of ideology of extreme individualism and it’s their right to do this and that, whatever. They don’t care about anybody else. It’s all about themselves,” Lenjureo said.

“The stuff that they were shouting at me … they’re not interested in conversation. They’re interested in pushing their ideology.”

Alex Hicks lives in the area and said she hasn’t felt safe to leave her home because of the protests.

“It just seems like the antithesis of what they’re trying to convey. They’re saying freedom, but they’re locking people in their homes, they’re closing down businesses,” Hicks said.

“These horrific global things are happening around us and they’re trying to fight for freedom. But they have the freedom to block streets and have police ensure their safety by voicing their opinion. It’s just pretty astounding. Do they know what freedom is?”