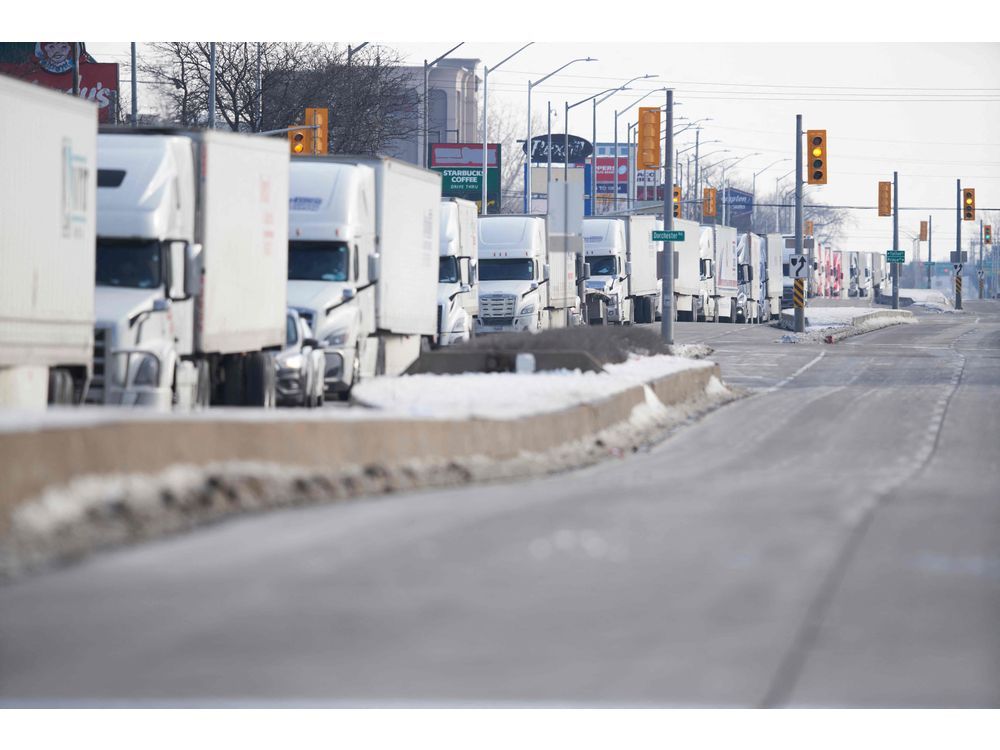 Protesters in Windsor, Ont., have blocked the Ambassador Bridge since Monday evening, a trade route that Emergency Preparedness Minister Bill Blair called “a vital artery of supply for the province of Ontario.”

The ways to and from the Ambassador Bridge are blocked by a relatively small number of people on Huron Church Road, the main route connecting the bridge to Ontario’s Hwy. 401. A limited secondary access to U.S.-bound traffic was open.

Blocking access is not hard to do, and could probably be replicated at practically any land crossing, said Bill Anderson, a trade expert and director of the Cross-Border Institute at the University of Windsor.

“If you’ve ever seen a truck get jackknifed on Huron Church Road, you realize one truck can stop everything up,” Anderson said. “I’ve only seen it once, but it’s amazing.”

How important is the Ambassador Bridge?:

Marco Beghetto, vice-president of the Canadian Trucking Alliance, told The Logic it accounts for 27 per cent of cross-border traffic between Canada and the U.S. each year.

Anderson said 19 per cent of all Canada-U.S. trade moves across the Ambassador Bridge, and 30 per cent of cross-border freight moved by truck uses that route.

“This is the most significant crossing in that trade relationship, because it’s the biggest highway crossing,” he said. On average, he said, 7,000 trucks cross the border there daily.

What goods come in and go out over the Ambassador?

“Everything moves across the bridge” except hazardous materials, Beghetto said, from raw materials to finished goods headed for store shelves.

The biggest category is auto parts; Flavio Volpe, president of the Automotive Parts Manufacturers’ Association, told The Logic about $50 million in parts and finished cars goes across the bridge each way in a normal day.

“Everything you see that’s in a car is made on either side of that border, and is on trucks every day,” he said. The auto industries in Canada and the U.S. are intertwined, and the Ambassador Bridge is the key link.

Food and agricultural products are the next-biggest category, said Anderson. (Dalhousie University’s Sylvain Charlebois estimated that 45 per cent of Ontario’s food crosses into the province via Windsor, but he told The Logic that’s based on figures nearly 10 years old.) If the blockade keeps up, some shelves in supermarkets might go unfilled before long, though it’s hard to predict what would be affected first, Anderson said.

The bridge also sees significant traffic in machinery and electrical devices, and raw materials from petrochemicals to wood to steel.

“Thousands, many thousands, of jobs are dependent upon that cross-border flow taking place,” Anderson said.

Are there alternative routes?

The federal government is directing commercial traffic to the crossing at Sarnia, Ont., a detour of about 1.5 hours on the U.S. side and a little more via Canadian routes, not counting processing time at the crossing itself.

“Any time one of those bridges becomes unavailable and you have to shift all the traffic over to the other one, you get a pretty massive traffic jam,” Anderson said; Tuesday afternoon, the Canada Border Services Agency showed a two-hour delay at Sarnia’s Blue Water Bridge to Michigan.

The trucking industry is already short of people, and losing hours of driving time — when that time is limited for safety reasons — will have ripple effects, Anderson said. “There’s not a lot of slack. And it’s kind of a hard constraint. You can’t stretch that day beyond what’s there.”

What are the authorities saying?

Matthew Moroun, the bridge’s private owner, told the Windsor Star he wants “the appropriate officials to take prompt action to alleviate the situation as quickly as possible in a manner that reflects mutual respect.”

Like the convoy demonstrations in Ottawa and at the crossing in Coutts, Alta., this is a local policing issue, Transportation Minister Omar Alghabra told reporters Tuesday.

How long before a blockade starts to hurt?

Anderson said a large auto plant might get 800 incoming trucks a day, 200 of them from across the border.

No auto plants were yet looking at being stilled Tuesday, but “ask me in a day,” Volpe said. Most keep enough inventory to go for 24 to 48 hours without incoming shipments, and between the Sarnia and Niagara crossings, some goods are flowing.

“If the assembly plant for a specific vehicle can’t get a critical part, like a seat, then it shuts that assembly line down,” he said. “And so even though it’s the seats, for example, Ontario seats into a Michigan truck, it also would then stop deliveries from any other supplier in Michigan, or in Ontario — or for that matter, Ohio, Indiana, Illinois — from shipping to that truck plant in Michigan. The disruption isn’t limited to Canada. The entire region is affected.”

This article is reprinted from The Logic, Canada’s preeminent tech and business newsroom. For more news, visit thelogic.co.