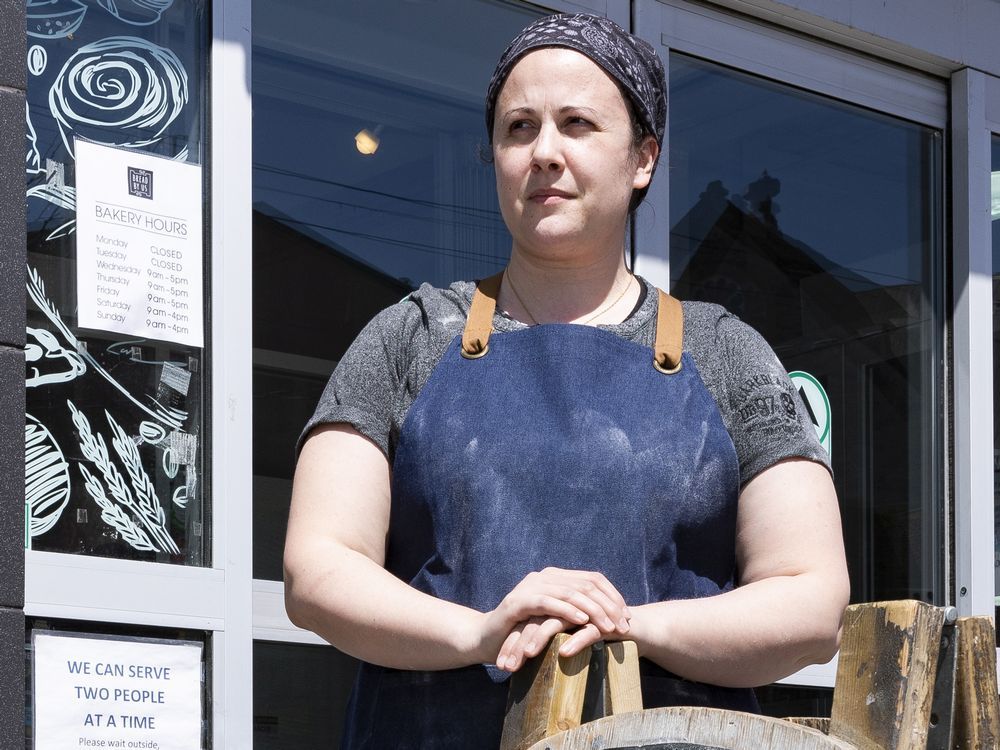 Late last month, after Jessica Carpinone temporarily closed her Hintonburg bakery due to a COVID-19 outbreak among its staff, she faulted Ontario’s government and the scrapping of its mask mandate.

“Due to widespread, rampant COVID everywhere, I really believe our public-health policy has been completely lacking,” said Carpinone, owner of Bread By Us.

“Letting COVID tear through the community is probably the worst-case scenario for us as businesses,” she said.

In the run-up to the June 2 provincial election, Carpinone’s take regarding the Doug Ford government is just one of many held by entrepreneurs.

Her bakery is one of untold Ontario businesses that since the start of the pandemic have lurched from one challenge to another, shutting when required and pivoting if possible, enforcing vaccine passports and mask mandates and standing up to belligerent, non-compliant patrons.

All the while, as COVID-19 battered their revenues while expenses frequently remained constant or climbed, the businesses looked to all levels of government to help them survive.

Now, while lockdowns and mask mandates appear to be things of the past, the businesses struggle due to inflation, supply-chain problems and staffing shortages.

Looking ahead, they contend that continued financial support from governments is needed, that consumer confidence needs to be rebuilt and that the non-stop uncertainty of doing business during the past two years must end.

Looking back, some business owners, such as Carpinone, can’t help but flunk the Ford government for its response to COVID-19 in recent months.

On the March 29 episode of his At The Pass podcast, Adam Vettorel, chef and co-owner of North & Navy in Centretown, said the Ford government’s handling of the pandemic has exposed a “complete lack of leadership.”

Ontario’s regimen of lockdowns was extreme, and businesses were sacrificed to limit the virus’s spread and keep hospitals functioning, Vettorel said.

But like Carpinone, Vettorel faulted the province for lifting vaccine passport checks too soon in a “capitulation” to “Freedom Convoy” truckers and their supporters.

“Doug Ford made that announcement because he was afraid of losing votes and no other consideration even entered into it,” Vettorel said.

“When Doug Ford says take your mask off and stop checking vaccine statuses, no one feels relieved. As restaurateurs we are all put in a horrible situation. Better leadership would have prevented us from being put here.”

In the pandemic’s early days, the province assisted restaurants and bars with measures such as green-lighting takeout sales of alcohol sold with food and capping the fees that delivery services, such as Uber Eats and SkipTheDishes, charged restaurants during lockdowns.

James Rilett, the Central Canada vice-president for Restaurants Canada, says the cap on third-party delivery fees needs to stay, even in the absence of lockdowns.

“We’re not out of the woods by any means just because we’re open,” says Rilett. “Our members have a lot of debt, and they’re facing higher costs and labour problems.”

Later, the province introduced grant programs that helped support small businesses that lost revenues due to winter lockdowns. In the spring of 2021, the Ontario government also made grants of up to $20,000 available to help beleaguered tourism and travel-sector businesses.

Ivan Gedz, owner of the Centretown restaurants Union Local 613 and Jabberwocky, said businesses that are still struggling due to the pandemic need continued support.

He noted that Amazon and other large employers enjoy government subsidies although they pay “crappy wages” and “abhor labour.”

“It’s a complete race to the bottom,” said Gedz. “Maybe we should be taxing the hell out of them and transferring the funds… Why not give the same benefits to small businesses?”

The grants were over and above the emergency funding that the federal government gave to businesses and workers, which Carpinone said mattered most during the pandemic. “What businesses need is ongoing and consistent pandemic support,” Carpinone said.

The one-time provincial grants were “more like a Band-Aid,” she said. “It doesn’t give us the certainty we need to keep building our businesses.”

“It’s hard for a business to remain confident… if it’s out of their control,” Groulx said.

She cited the examples of businesses that repeatedly laid off staff during the pandemic with little certainty about who would return to work.

“And there were times when businesses didn’t know what was going to happen until Friday night and the change happened on Sunday,” she said. Restaurants, in particular, were caught off-guard by snap announcements that left them with inventory that would spoil rather than be prepared and sold, Groulx added.

“Predictability is the key here,” agreed Sueling Ching, president and CEO of the Ottawa Board of Trade.

“Inspiring business, consumer and employee confidence is the foundation of economic recovery and reaching our future goals,” said Ching.

She said the Ontario Chamber of Commerce has identified bolstering business confidence and predictability as a key election priority.

In particular, supply chains in Ontario need to be strengthened through government support of manufacturing, investments in airports and transportation and addressing labour shortages that affect supply chains through workforce training and immigration, the document says.

Michael Wood, an Ottawa entrepreneur who turned to government relations after COVID-19 killed his event rental company, said the one thing the provincial government must focus on in the months ahead is fostering consumer confidence.

“People have to feel confident going back out and engaging in things they always did,” said Wood.

“Let’s say my partner went out and had dinner Monday, she goes out and gets COVID … If that keeps happening people are not going to want to go out.

“Consumer confidence will flow from the government letting people know that the right precautions are being taken so that they are safe when they go out,” Wood said.

When Wood spoke this year before the provincial government’s standing committee on finance and economic affairs, he said the government needs to have a marketing budget to win back consumer confidence.

He also recommended that small businesses need tax rebates or financial assistance to upgrade their HVAC and filtering systems or bring in portable units to protect their workers.

Groulx of the Ottawa Coalition for BIAs said that addressing affordability for people in general will also assist businesses.

“The No. 1 thing I’m hearing from almost every sector is staffing and employment, and that ties in with affordability,” says Groulx.

“Making Ontario and Ottawa an attractive place to live and work is critical,” Groulx said, pointing out the impact that the rise of working from home has had.

“Affordability in housing, transportation, and the cost of living is top of everybody’s mind.”

The Ford government did raise the minimum wage this year, something that employers do not necessarily see “as a bad thing,” Groulx said.

“However, if you do not reduce the cost of living, it’s always going to be chasing rainbows,” she said.