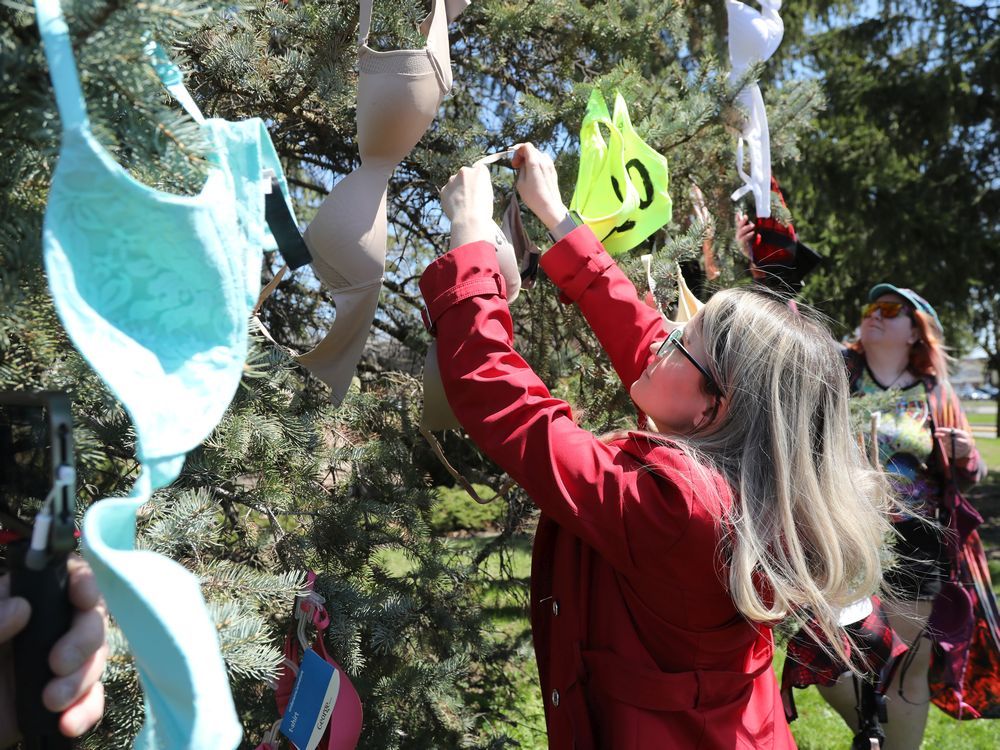 Two of embattled Coun. Rick Chiarelli’s former staff members and their supporters hung bras on a tree outside Ben Franklin Place on Thursday.

The College ward councillor has an office in the building. The bras were a reference to allegations that Chiarelli had sexually harassed staff, including asking the women to go braless.

The protesters want candidates in the upcoming Ontario election to commit to changing the Municipal Act so a city councillor who has behaved disreputably can lose that council seat.

But this has not happened and that is why the Municipal Act needs to be changed, Dobbs said.

“There needs to be real accountability,” said Nancy O’Brien, a former Chiarelli staffer who was a witness in the same integrity commissioner’s investigation.

Chiarelli, a veteran councillor, was the subject of two integrity commissioner investigations.

The commissioner’s first report, released in July 2020, looked into three complaints and found that Chiarelli had “exploited the power dynamic of the situation.”

Council unanimously agreed with the commissioner’s recommendation to apply the maximum 90-day salary suspension for each case, totalling 270 days.

In an October 2019 statement, Chiarelli said the process associated with a complaint should give him the same procedural rights that any person facing such allegations would receive. He later argued to the court that the integrity commissioner and council showed bias against him.

In December 2021, a three-judge divisional court panel dismissed the judicial review application challenging the investigation. The ruling found the complaints fell within the commissioner’s jurisdiction.

“There is no question that Councillor Chiarelli’s conduct, as found by the Commissioner, was serious, offensive, and disgraceful, as well as a clear violation of the Code of Conduct,” the ruling said. But the panel also found that councillors who refused to sit at the council table with Chiarelli had failed to “set aside their preconceptions.”

In an ideal world, O’Brien believes elected politicians should belong to a body with disciplinary powers, similar to those for physicians, lawyers and other professionals. As it stands, the strongest penalty is a salary suspension, she said.

“Mechanisms need to be in place to stop politicians from abusing power,” she said.

Former three-term city councillor Stephen Blais, who became a Liberal MPP for Orléans in a February 2020 by-election, has twice introduced a private member’s bill that would allow a judge to declare a council seat vacant, arguing ordinary people would lose their jobs for harassing and abusing workers.

His most recent bill received second reading, but did not pass before the election was called. Blais has said he would pursue it again if he was re-elected on June 2.

“Frankly, this is not a partisan issue,” she said. “It’s very disappointing. Hopefully, every candidate in this election will say they care about this issue and will make sure it’s front and centre in the next legislature.”

Leigh believes lawmakers are worried that they might undermine the democratic process by allowing frivolous complaints to come forward, but she argues it would be up to a court, not city council, to decide whether pay should be docked or a council seat would be lost.

“We know that less than four per cent of complaints of sexual violence are false complaints and one in three women will experience sexual violence in her life,” she said. “Survivors, when they come forward, are not doing it for gain, fame or money because these things don’t come out of it. They’re doing it to protect other women and for justice.”

Dobbs said she had been called petty, vindictive, a liar and a political pawn and accused of hiding behind anonymity.

“And then, when I went public with the integrity commissioner’s second report, I was apparently seeking attention. We need our provincial candidates to take this seriously and commit to making change.”

Chiarelli did not respond Thursday to a request for comment.