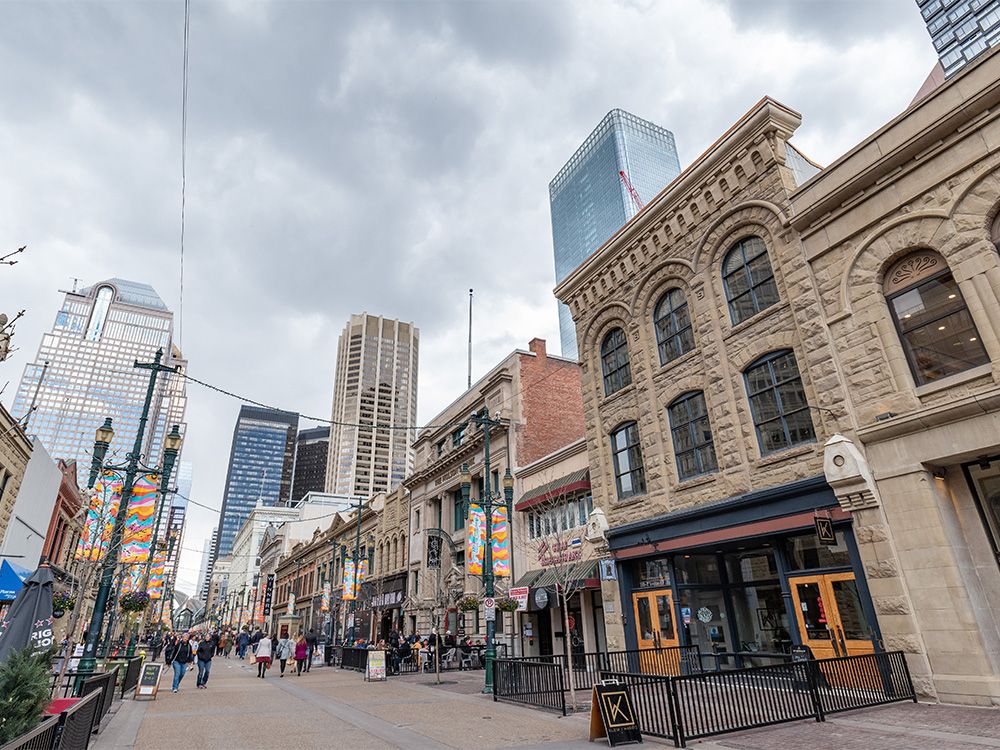 If granted city hall’s blessing, the construction of a huge residential-office project along Stephen Avenue could force Central United Church to temporarily relocate its Sunday worship.

But that possible reality would be more than redeemed by the proposed Stephen Avenue Quarter’s residential element, including a 66-floor condo structure — which would be the tallest building in Western Canada — said Diane Scheibner, chair of the church, whose location at 131 7th Ave. S.W. dates back to 1905.

“It means a lot to Central United Church, we’re so happy to see it’s mixed-use and a lot of residential stuff,” Scheibner said Wednesday, a day after the plan was unveiled.

“It reshapes Central United Church — we’re well-positioned at the bottom of a multi-storey residential building to provide services to the community.”

The residential component of the project spearheaded by local developer Triovest gives the project appeal well beyond the church, which would remain in place along with the historic Bank of Montreal building directly to its south.

“It’s exciting news — projects of this scale come along rarely and it repurposes some lands that have just been sitting there and unproductive. It’s long overdue.”

Kehoe was referring to a strip of partly derelict storefronts along 7th Avenue between Centre Street and 1st Street S.W. that would be removed by the project, which would also transform much of the north side of Stephen Avenue on the same block.

Scheibner said that would probably displace members of Calgary’s vulnerable population, who often squat in the abandoned spaces along 7th Avenue.

The plans also include a 24-storey office structure, a 54-floor rental building and an 18-storey hotel.

The block in the heart of the city’s core has long been the source of rumoured revitalization. Triovest purchased the historic property in 2016. Previous owner Heritage Property Corp. had announced a $30-million project in 2009, which would have restored storefronts and built an automated parking garage, but it never materialized.

It also comes at a time when the downtown hosts 14 million square feet of vacant office space, nearly a third of such real estate in the core.

But some commercial realtors insist much of that unwanted space is of the older, lower-grade variety that should be either torn down or repurposed, and that newer product is still in demand.

With the project yet to receive approval and any completion years distant, Kehoe said its timing could be ideal.

“The economy always goes in cycles, as does the office leasing market,” he said.

“Given the scale of this, if it’s five years out it would dovetail nicely with the turnaround of the office market. This is a long-term plan by a local, visionary developer.”

Despite the construction of numerous condo highrises near the city centre in recent years, Kehoe said there remains demand for quality residential development in the area.

“This would be interconnected with other elements of the downtown core like the Glenbow Museum and the Arts Common — this would be a prestige address,” he said.

The proposal — for which Triovest submitted a development permit on April 21 — should be seen as a vote of confidence in Calgary’s economic future, said Mark Garner, the new executive director of the Calgary Downtown Association.

But sacrifices will likely be needed if it goes ahead, he added.

“I’m concerned because (on Stephen Avenue) it’s one of the best blocks of retail and you’d hate to see that lost — it just kills the vibe and the feel,” said Garner.

The blueprint’s intention to preserve the historic facades along that block, he said, would be merely superficial.

“You want to ensure you have these unique spaces,” said Garner, former executive director of the Downtown Yonge Business Improvement Area in Toronto.

And while greater population density downtown would be a positive, it has to be done with an eye to ensure its livability, taking into account sufficient green space, entertainment options and even pet amenities, he said.

“In Toronto, there’s been a big battle of what’s going to be the first 100-storey tower, but I hope this isn’t going to be a fight over ‘height, height, height’ but about quality,” he said.

“Then, everyone’s going to ask for the same height and density — and I’d feel sorry for the people who bought into Telus Sky who might never see the mountains from there again.”

Fairfield Commercial’s Kehoe said what would likely be a phased-in construction shouldn’t cause considerable disruption in such a heavily trod part of the downtown, given builders’ expertise.

Central United Church’s Scheibner said there will be some upheaval, which would be nothing new to an institution that’s seen so much of the city’s history.

“You can’t have something of this magnitude without disruption, but we’ve weathered 117 years,” she said.