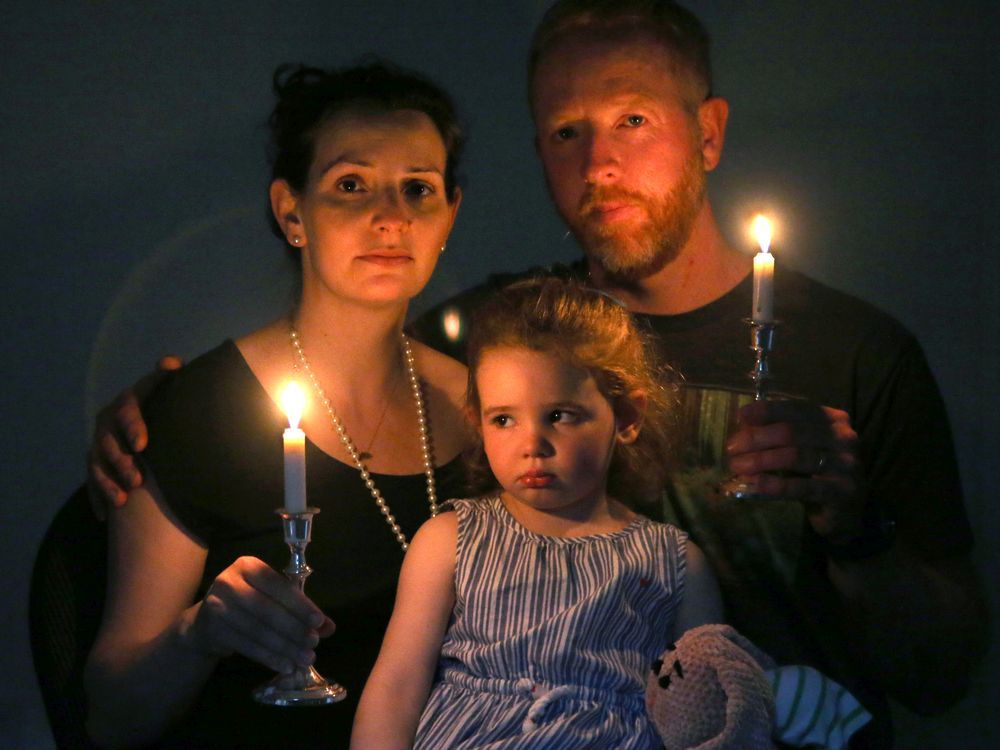 In a tidy grey house on leafy Knightsbridge Road, a family waits with great expectations — for the power to return, for the baby to arrive.

There is, in fact, something worse than being without electricity for 10 days: doing so while extremely pregnant.

Joella Gencher and Michael McDougall, both 37, are to have their second child any day now. Instead of doing the usual prep for a new infant (crib building/supplies/hot water!), they are throwing out food, going on creative meal-hunts, leaning on the kindness of neighbours and wondering where the next shower or bath is coming from.

“The most stressful part is the uncertainty,” said Gencher from her powered office at the University of Ottawa. (“I don’t really want to be home right now,” she said with a laugh.)

Admitting she feels a bit “sheepish” in complaining because others are in worse shape, she said the Carlingwood-area neighbours have been wonderfully supportive but spoke of the exhaustion of having to ping-pong between houses for meals, favours or electric re-ups. This was underlined, she said, when she threw her back out (lifting a heavy cooler bag), then trying to source an ice pack late in the evening.

“That was the low point of the week.”

McDougall, a public servant who is working from home, said he had to work on his neighbour’s porch for several days last week and fend off mosquitoes between tapping on his laptop.

“It’s more than an inconvenience. It’s been extremely stressful.”

They are both worried they may arrive home, post-birth, to a house without power or hot water, or any ability to run a fan or keep the house cool, or bathe their first child, who is three-and-a-half.

Joella has family in Montreal and the couple have toyed with the idea of having the baby there. But it would mean a different medical team, a different hospital and a whole set of new unknowns.

The couple first thought the power would be out for a couple of days, then hung on the Friday deadline that Hydro Ottawa was aiming at for near-complete restoration.

“(They) raised everybody’s expectation,” said McDougall. “We thought ‘Well, we can hold out until Friday.’ ”

Then Friday came and went, and Saturday, Sunday, into Monday. They have scarcely seen a hydro rep all week, except to look at the house next door. The communication from the utility, they say, has been poor or non-existent.

“There have been no realistic timelines provided and it’s Monday at two-fifteen,” said Gencher. “That is really frustrating for me.”

Adds McDougall: “They talk about 94 per cent power restored, but that still leaves 8,000 to 9,000 citizens and families who are struggling.”

A neighbour did lend them a generator but, by then, the fridge was nearly empty and it fairly quickly ran out of gas.

“My job, as the husband, is to try to maintain some sense of calmness, but it’s been very challenging.

“Basic care, in a power outage, for someone who is that pregnant, for this amount of time, is a nightmare.”

The family find themselves among the curious pockets in the older sections of the city still in the dark, but surrounded by people with full electricity, like the residents across the street.

They do worry about their older, more vulnerable neighbours and seniors who are coping in a nearby highrise on Richmond Road.

The new baby is a boy, we are told. One day, he will learn the story of the Dark Ages, won’t he just?