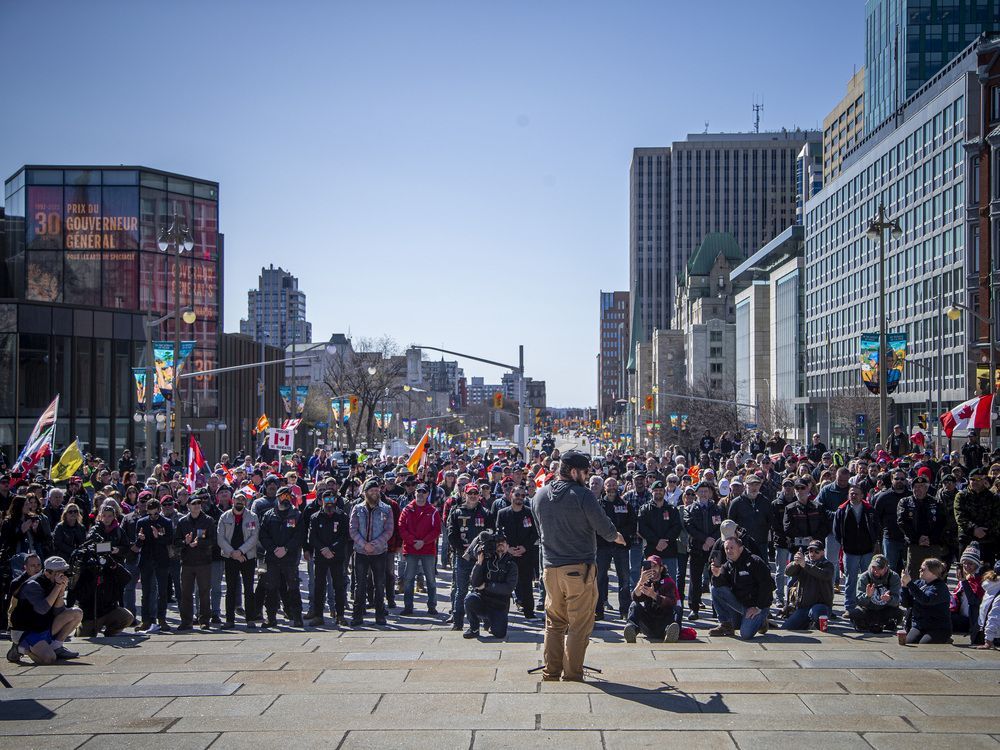 Thousands of people chanting “freedom” gathered in downtown Ottawa on Saturday to attend a ceremony at the National War Memorial and to watch as groups of bikers drove nearby under intense police scrutiny.

It was an event that inspired anxiety in the days leading up to it, in part because of its moniker, “Rolling Thunder.” Some Centretown residents feared it would bring back the noise and disruption they experienced during the “Freedom Convoy” protests in late January and February.

But, although those who gathered Saturday carried ubiquitous Canadian flags, U.S. flags and signs criticizing vaccine mandates and shouted “freedom” — a theme they shared with the previous protest —  this time the event did not have the same impact.

It did, however, take place under the watchful eyes of hundreds of police officers, some of whom carried projectile launchers and wore protective equipment.

Neil Sheard, organizer of the “Rolling Thunder” rally, had intended for it to begin with a ceremony at the National War Memorial conducted by veterans who had been forcibly removed from the monument when police cleared “Freedom Convoy” protesters from the downtown core in February. Saturday’s events were an opportunity for those veterans to “take back” the monument, Sheard said. A parade of bikers was to follow.

A group of counter-protesters, including veterans opposed to the “Rolling Thunder” rally and locals, disrupted the beginning of the ceremony and argued with the rally attendees. “April 30 is not November 11,” one counter-protester’s sign read.

The rally crowd grew through the morning and likely numbered in excess of 3,000 at its peak. Sheard spoke to the swelling crowd as he introduced veterans who were part of the “freedom movement.” He railed against fear and division, fuelled by mainstream media, he said, which were driving Canadians apart.

“This screen is what has put us here,” he said, pointing to his cellphone. “We don’t look anybody in the eye anymore, we don’t talk face to face anymore. ‘I’ll send you a text.’ Nobody writes letters anymore. This is where the fear comes from.”

Though the veterans were the ostensible focus of the event, the protests in February and the police crackdown on them reappeared as a frequent message in speeches by Sheard and others.

“What happened on that hill back in February, it was pure love,” Sheard said, “and then the hate came. Well, guess what? The hate didn’t win because we’re all awake.”

A significant majority of the attendees had also been in Ottawa during the “Freedom Convoy” protests. Thomas, a veteran who spoke at the ceremony, asked the crowd how many of them had been in the city for the trucker convoy. Most hands went up.

“That’s amazing,” Thomas said. “You know what else is amazing? That there were others that didn’t put up their hands, and they’re here now.”

To Thomas, and other veterans who spoke, Saturday’s event was an important display of freedom of speech, freedom, he stressed, that was paid for by Canadians who gave their lives for their country.

“To me, this memorial is the definition of freedom in our country,” he said. “If it wasn’t for those people who paid that ultimate sacrifice, we probably wouldn’t even have the opportunity to be here today.”

The speakers at the ceremony gave only their first names. This newspaper approached Sheard to ask for some of the speakers’ full names and backgrounds, but Sheard would not provide them.

A veteran named Daryl, who said he served in Bosnia, Afghanistan and Iraq, told the crowd about his mental health struggles after his tours. He nearly attempted suicide, he said, but later found God and other motivation to keep going.

“At my lowest,” Daryl told the crowd, “I began searching for answers to why I had to go do what I did in all those different countries, and in doing so I discovered who the real enemy of this world is: the elites, the ones who are controlling what we hear, what we see, what we read, our education system, our monetary system.”

Chris Deering, another veteran who spoke at the ceremony, described how he had been arrested during the February protests. To him, the convoy had provided a “glimmer of hope.”

“I was there in Ottawa along with many of you,” Deering said. “The people wanted the government to come and listen to their concerns, and did they?”

“No,” the crowd responded.

Deering said officers dragged him to the ground, kicked and kneed him, used zip ties to bind his hands and forced him to stand in a processing line for hours. He said he was then thrown out of the city “like garbage and told not to return to our nation’s capital.”

It was Deering who placed a wreath on the tomb of the unknown soldier after the speeches concluded on Saturday, while a piper played Amazing Grace.

Alongside the sense of unity in their shared values, the assembled rally-goers also found a sense of community that many of them said they had lacked since February.

Mehdi, an Iranian-Canadian from the Toronto area who declined to give his last name, ran into a friend, Garrit O’Meara, a small business owner from Bonville, Ont. They had met at a rally in February.

“It was beautiful,” O’Meara said of Saturday’s war memorial ceremony. “Millions of people have died so we have the right to do these things. If we do not stand for these rights, we will lose them. It’s very clear. In China, if you have an American flag, you get arrested. If you say, ‘I don’t like the government,’ you get arrested.”

Mehdi said he believed Canada was becoming a place where, because of “cancel culture,” you could not express your freedom of speech.

“Everybody thinks (the rally, or protest) is about a vaccine mandate, but it’s not about the vaccine. It’s about using your freedom of expression, actually,” he said. “I’m really proud to be part of this (movement). I haven’t been this proud since I came here, actually. I’m all in. What’s the point of living if there’s no freedom.”

After the war memorial ceremony, the crowd went south on Elgin Street and watched as four groups of motorbikes, each one numbering approximately 75, looped past and left the downtown core. It was a highly choreographed event, with police guiding the bikers into and out of the city as hundreds of officers oversaw the crowd. Ottawa police said they had no intention of allowing the bikes to disturb the residents in Centretown.

Some rally-goers grew frustrated with police, however. They argued that the bikers should have been allowed further into the city or closer to the war memorial. They hurled abuse at officers and some pushing broke out.

Two people had been arrested as of mid-afternoon.

Soon afterward, though, the situation calmed and some roads around the monument were reopened to traffic. The atmosphere on Parliament Hill became largely festive, with music playing and crowds sitting and standing on the grounds.

More “Rolling Thunder” events are scheduled for this weekend, including a Sunday morning church service in Vanier.