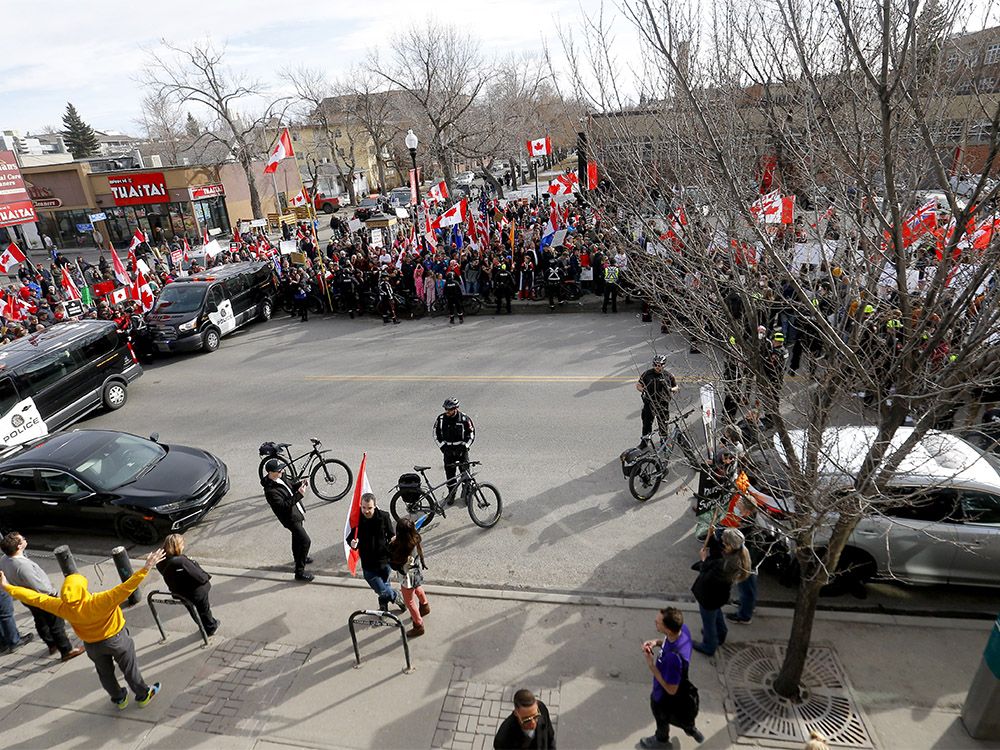 Calgary police chief Mark Neufeld says his officers were justified in their use of force against counter-protesters at the weekend “freedom rally” in the Beltline.

In videos posted to social media, police can be seen ramming bicycles into counter-protesters to push them backwards, opening space to allow the larger group of anti-COVID mandate protesters to pass through the area.

Neufeld argued forcibly moving the counter-protesters was “the most reasonable course of action” to resolve the tense standoff between the groups at 5A Street and 17th Avenue S.W., which lasted about an hour. He said police asked the group of about 100 counter-protesters to move to allow the hundreds in the larger demonstration to pass by, a request they refused.

“While any use of force is regrettable, particularly in this situation, police are authorized to use reasonable force to carry out their duties in the broader public interest,” Neufeld told reporters Monday.

“While many took this decision as officers choosing sides in the protest, what I can tell you is this was definitely not the case. . . This was simply the most effective way to bring this conflict to a conclusion.”

In a statement, the group organizing the counter-protests called on Neufeld to “stop making excuses” for what they described as a police failure to curb the weekly rallies.

“Neufeld can make whatever excuses he likes for assaulting Beltline residents,” Community Solidarity YYC said. “He has proven that enforcing laws depends entirely on the mood of the Calgary Police Service.”

Weekly protests in opposition to COVID-19 public health interventions have taken place in Calgary during much of the pandemic, but tensions rose in recent weeks as counter-protesters took to the streets in opposition of the demonstrations, which they condemn as noisy and disruptive.

The rallies continue despite Alberta having removed nearly all its COVID-19 measures, including its mask mandate and vaccine passport, two weeks ago.

Neufeld said police attempted this Saturday to divert the anti-mandate protesters away from their planned march route down 17th Avenue S.W., but the group pushed past police.

“The group literally pushed past the officers that were in that particular location and continued on,” Neufeld said. “This represents what I would call a marked escalation in the behaviour of the freedom group, who up to that point had been reasonably co-operative with police during the facilitation of their right to protest over the last many months.”

The police chief did not directly respond to a question on whether police used bicycles to stop the anti-mandate protesters from pushing past police, as they had used on the counter-protesters, instead saying blame for escalation Saturday “can be shared on both sides.”

But Neufeld also said in response to comments this weekend from Mayor Jyoti Gondek that police shouldn’t shoulder that blame, saying it was “demoralizing” for officers to hear criticisms from members of city council.

“I don’t think this is the time to be looking to blame anybody, and it sort of feels like the police are being blamed for the fact that these things are going on,” Neufeld said. Gondek had said insufficient police enforcement of the anti-mandate protests allowed the situation to develop into its current state.

Speaking to reporters prior to Neufeld’s comments Monday, Gondek said she was at the protest Saturday and witnessed police action in forcibly moving counter-protesters firsthand.

“Take whichever argument you wish, but anytime you have to slam a bike into a resident, you have to reconsider the measures you are using to exercise crowd control.”

Coun. Courtney Walcott, whose Ward 8 encompasses the Beltline, has also been critical of police response, tweeting this weekend about “unequal treatment of protesters” by police. He said Monday a current “communication vacuum” about police approaches is hurting residents’ trust in police, city council and the Calgary Police Commission.

The police commission, which serves as an oversight body for CPS, said in a statement Monday they recognize concerns about police tactics used Saturday and pointed those directly involved to a website outlining the process for filing complaints into police conduct.

“This past weekend’s events show a clear escalation in the situation that needs to be addressed, and everyone involved will continue working together this week to find a better path forward,” the police commission’s statement said. A spokesperson was not made available for comment.

When asked why more bylaw enforcement had not taken place against protesters, Neufeld said police are looking at what laws on the books could be used for these “ongoing and sustained” protests. He said there’s a need to balance Charter rights to protest with rights of Beltline residents, with police needing to determine when protesters’ actions become an “unreasonable infringement.”

Neufeld said the protests will likely not see a resolution this week. He said police are looking to alter their response as the protests evolve, but did not give details as to what approach the force may take this coming Saturday.

The police chief asked the anti-mandate group to consider the impact of their protests on community members and whether their protests need to continue given Alberta’s removal of COVID-19 measures. He also asked counter-protesters not to ramp up their efforts to block the street in opposition to that group.

Elsewhere Monday, Calgary Chamber of Commerce CEO Deborah Yedlin decried the continued protests, saying they are driving Calgarians away from businesses looking to recover from challenges faced during the pandemic.

“We urge those eager to share their message to move protests to a location that doesn’t impede commerce in our city, where the main impact is to have concerns heard, rather than harming bystander businesses,” Yedlin said in a statement.