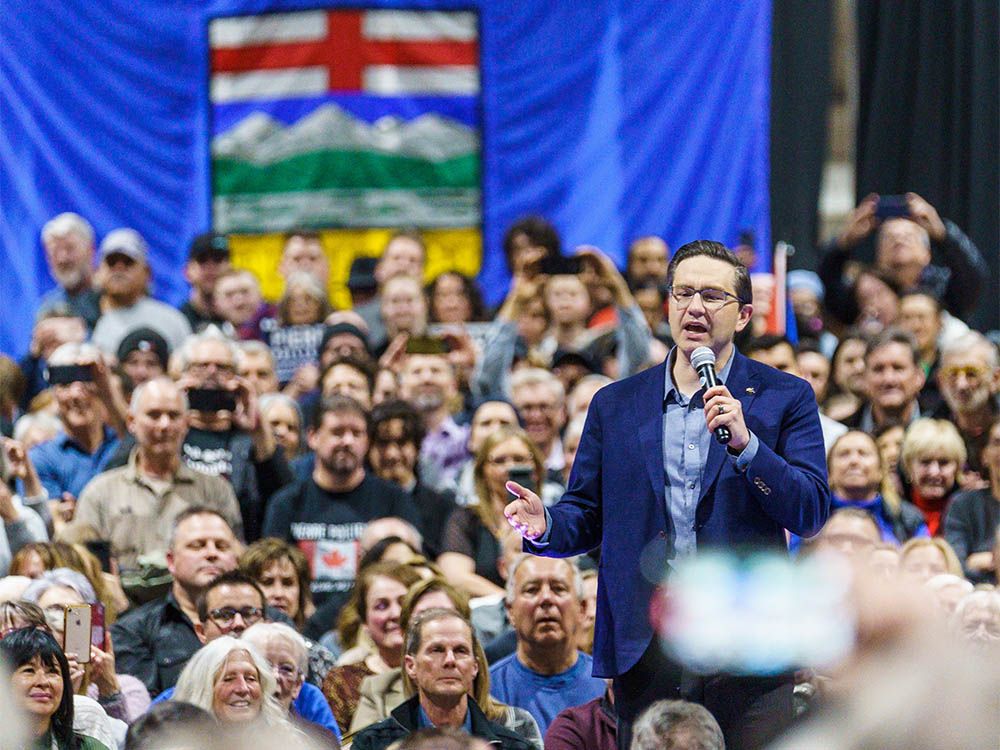 Pierre Poilievre brought his Conservative Party of Canada leadership campaign to his hometown on Tuesday night.

More than 5,000 supporters packed into Spruce Meadows’ Equiplex to hear him pitch his message of freedom, and putting an end to the “gatekeepers” in government.

“Liberty under law is an 800-year-old tradition . . . but it is constantly under threat, it needs to be renewed and upheld,” said the born-and-raised Calgarian who now represents the riding of Carlton in Ontario. “People have to take back control of their lives and restore freedom.”

Poilievre is bidding to replace Erin O’Toole, who was ousted by the party following a failed election that saw Prime Minister Justin Trudeau re-elected to his second consecutive minority government.

O’Toole was seen by many within the party to have moved the needle too far to the left. He angered many in the party’s base when he included a carbon tax in his platform on addressing climate change, despite previously promising to end the tax on emissions.

Poilievre promised to end the carbon tax, build pipelines and increase port access on the west coast, in the Maritimes and through Churchill, Man. He committed to make oil and natural gas more accessible to Europe and Asia to help end dependency on energy from Russia and other dictator nations.

He also committed to ending the printing of money that he says has led to cutting the purchasing power of the dollar and helped cause the spike in inflation. He also said he would end wasteful spending and defund the CBC.

Poilievre said he would pressure the provinces to expedite the recertification of immigrants to continue their careers in Canada.

He finished by saying he would end divisive policies and language that have pitted Canadians against each other and has been used as a tool to keep power in the hands of governments.

The message resonated with much of his base at Spruce Meadows on Tuesday.

“I’m worried about Canada and Pierre has given us hope,” she said, adding she is concerned about vaccine mandates, overspending by the Liberal government and the need to support the oil and gas industry.

“You know what I love about Pierre? He’s down to earth, he speaks like a typical Canadian. He’s about getting people working. I love how he’s honest, he has integrity and those things are important to me.”

In the House of Commons, Poilievre has been relentless in challenging Trudeau, and has been one of the most prominent voices in the Conservative caucus since Andrew Scheer was leader.

His ability to take Trudeau to task is one of the many things that drew in Garry Pequin, 72, who made the trip from Airdrie to see him, although Prince Albert, Sask., is home. For Pequin, there is only one choice for the next party leader.

The crowd was all-in from the moment Poilievre stepped onto the stage surrounded on four sides by rows of chairs. Many people waved signs that read “Pierre Poilievre for Prime Minister”, while other signs read “Defend the Charter” and “Freedom is Canada’s Nationality”, while “I love Canadian Oil and Gas” signs and shirts speckled the audience.

Poilievre is not just leading in the polls, he also has the backing of most of his peers, with more than 50 Tory MPs endorsing him — former Quebec premier Jean Charest has 11 and MP Leslyn Lewis has six. Scott Aitchison and former mayor of Brampton, Ont., Patrick Brown are also running.