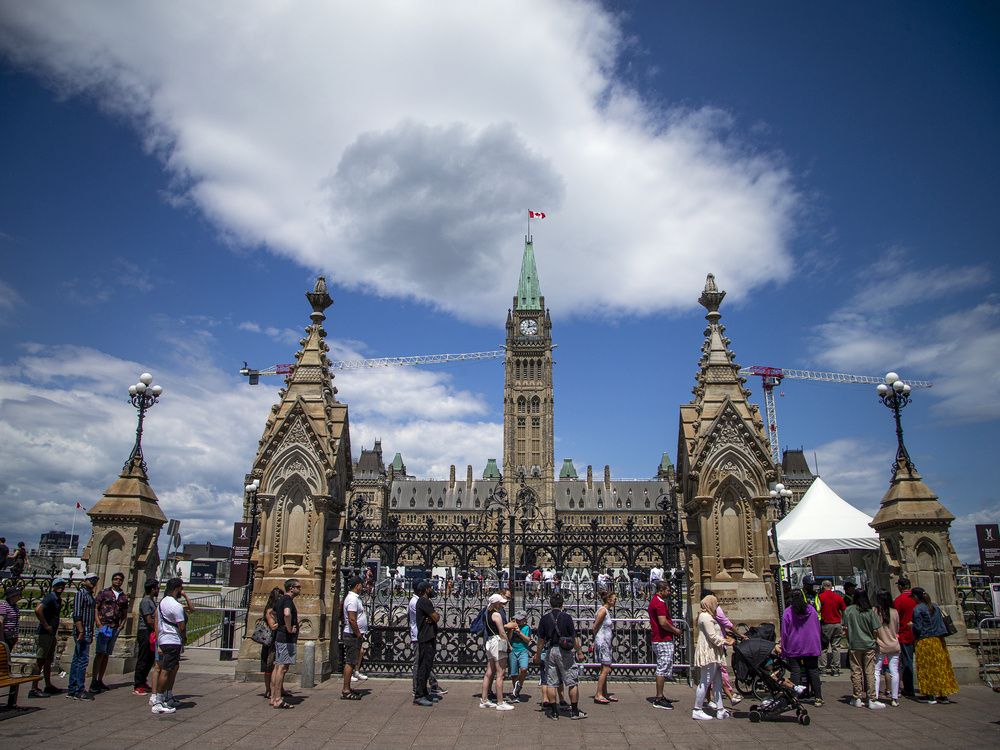 It almost felt like a regular summer Saturday in downtown Ottawa.

There was still a large number of police officers patrolling the core areas, making sure convoy-like protests didn’t cause trouble, but there was hardly noise, not even from the six or so demonstrators gathered at the intersection of Wellington and Metcalfe streets.

Visitors formed orderly lines to access Parliament Hill, families took selfies outside of the prime minister’s office, and, around the corner from there on Elgin Street, people waited patiently to board sight-seeing buses.

While the city has dreaded the potential for protests disrupting Ottawa’s biggest celebration, one people have waited for after enduring two years of the ruinous COVID-19, there wasn’t much to complain about under sunny skies and, so far on this holiday long weekend, a mostly honk-free downtown.

Bogdan Wozniak’s hot dog cart at Sparks and Metcalfe streets was quiet at noon on Saturday, but he had been busy feeding revellers the previous day, selling out of food by 6 p.m.

“We were actually very pleased,” Wozniak said. “It was one of the best for us. People behaved.”

Wozniak tipped his hat to bylaw officers, who allowed him to set up shop after a morning cutoff time for accessing the restricted area.

Bylaw officers were busy on Friday enforcing a street parking ban in the central “motor vehicle control zone.” According to the bylaw service, officers issued 327 parking tickets and had 91 vehicles towed.

The enforcement work continued Saturday. In the early afternoon, bylaw officers had a flat-bed tow truck operator haul away an illegally parked motorcycle on Metcalfe Street.

Mary Huang, president of the Centretown Community Association, said there had been “a few minor incidents with the convoy folks” on Canada Day while also noting the increased police presence in the area.

“I wished the OPS were doing in February what they are doing now, instead of letting the occupation set up and entrench themselves without permits and people trying for maximum disruption for over three weeks,” Huang said.

Police from several agencies have been watching the streets this weekend, including those in the ByWard Market.

It was a typical Saturday lunch hour with no disruptions in the historic district. On Canada Day, hungry families could easily find patio tables in the early afternoon, but the number of visitors increased throughout the day.

John Borsten, who owns several restaurants in the market area, including new ones Starling, Apothecary and York on William — all in the old Fish Market building — said Friday had been a good day despite news reports warning people about the potential for more protests.

Restaurateurs were looking for a comeback Canada Day after the annual party, which is an economic boon to the city’s hospitality sector, was impacted by COVID-19 in the previous two years.

“The day started slower, but ended up maybe down five per cent from pre-COVID,” Borsten said Saturday.

“The market rocks,” he added. “Be positive out there.”

Borsten said the bigger challenge for the market was the official Canada Day event being shifted to LeBreton Flats. That sucked revellers away from the core and farther away from the market.

All 12 Photos for Gallery

With Centre Block under construction, the federal government moved the main stage for festivities to outside the Canadian War Museum. The rehabilitation project on Parliament Hill is scheduled to last through 2030, meaning the big Canada Day show could take up temporary residency on LeBreton Flats.

One big benefit of LeBreton Flats is, like the parliamentary precinct, it’s served by the Confederation Line LRT.

OC Transpo ran the maximum 15 double-car trains during peak service periods to move people in and out of LeBreton Flats on Canada Day.

Ironically, Pimisi Station wasn’t available for some of the evening because of the overwhelming number of people who wanted to access transit, which was free all day.

First, OC Transpo closed the station’s westbound platform and asked customers to get off at Lyon or Bayview stations, then it closed all of Pimisi Station and no train stopped there.

On Saturday, two of OC Transpo’s top directors weighed in on the Canada Day LRT service.

According to transit operations director Troy Charter, closing the station was planned in consultation with Ottawa police.

“Pimisi station was temporarily closed for a short period (Friday) evening to assist with crowd management as customers were arriving for Canada activities at LeBreton Flats,” Charter said, and he thanked people for listening to staff who tried to direct crowds.

The brief unavailability of Pimisi Station called into question the city’s ability to effectively use its $2.2-billion LRT system for a major event on LeBreton Flats.

Bluesfest begins on Thursday at the same spot outside the war museum, prompting transit planners to assess their strategy for getting people to the music festival and, especially, getting them out of LeBreton Flats each night.

“Upcoming events have smaller crowds than those who attended Canada Day festivities, however we will be incorporating lessons learned from July 1 as we finalize transit plans for Bluesfest,” Scrimgeour said.