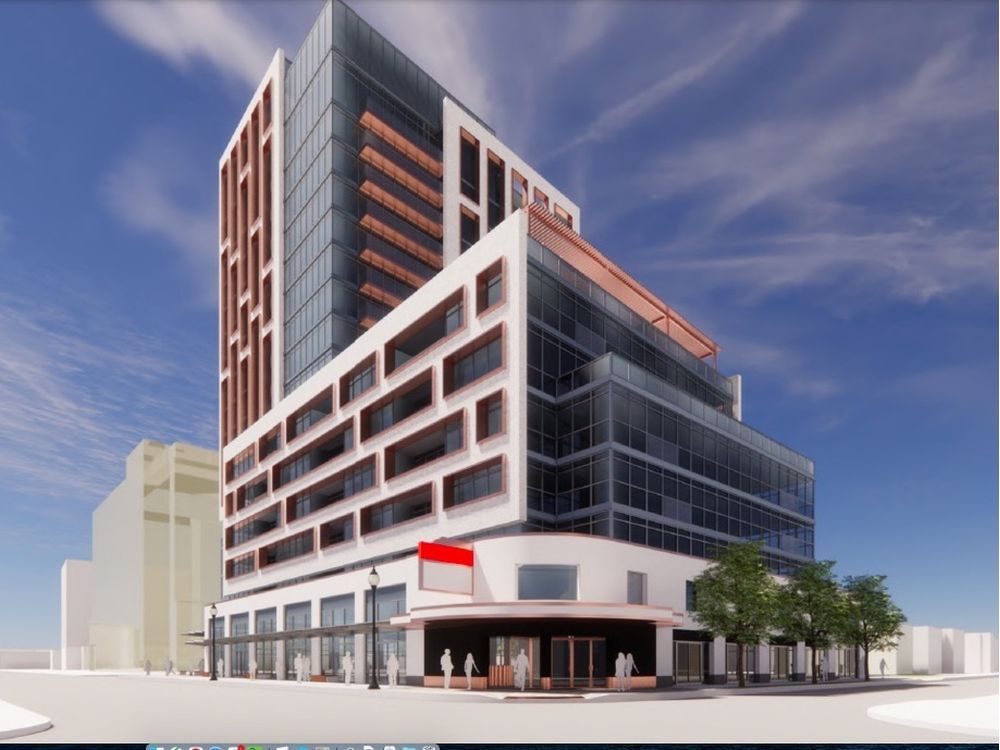 Rarely does a high-rise application cause the city’s planning committee to stall the approval process, but there was something about a tower eyed for a Hintonburg intersection that didn’t sit well with councillors on Thursday.

In fact, the 16-storey project proposed for Wellington Street West at Parkdale Avenue might have been flirting with rejection, if not for the committee’s decision to defer a decision and allow the developer to have more discussions with city staff and Kitchissippi Coun. Jeff Leiper.

The development site at 1186, 1188 and 1194 Wellington St. W. has a commercial building and the old Elmdale Theatre. Both buildings would be demolished to make way for the new mixed-use project, which requires amendments to the official plan and zoning bylaw.

Welldale Limited Partnership, an affiliate of Minto Group, agreed to shave two storeys from the concept it first presented to the community in 2021.

Leiper, who lives around the corner from the site, said it’s still “a pretty wild proposal” for an area that’s often jammed with traffic.

The property zoning has a six-storey limit, but a community design plan considers buildings up to nine storeys at the corner property if there’s a benefit to the community. Instead of a more squat building design, the developer has proposed to redistribute the density into a tower.

Leiper took issue with the developer also applying the nine-storey maximum to the old theatre property at the corner of Hamilton Avenue, with the density shifted to the tower portion of the plan. He also questioned the vehicular exits from the site, considering the heavy traffic already in the area.

The development would have 212 units and 139 underground parking spots.

Cheryl Parrott of the Hintonburg Community Association called Parkdale Avenue “a parking lot for a good part of the day.”

Minto Group’s Kevin Harper said it’s not the company’s problem to solve the city’s transportation troubles, but he assured Leiper that the site plan study will examine vehicle access.

Harper noted that the city is spending billions on an LRT system that supports this kind of development.

The development site has good scores for public transit, walking and cycling, Harper said. It’s about 750 metres from Tunney’s Pasture Station and new residents would receive a one-month Presto pass from the company.

The developer has attempted to be sensitive to the history of the property. Its architecture firm, Dialog, paid homage to the old theatre’s entrance at the corner of Hamilton Avenue by using a curved design.

A $514,708.38 community benefit would be paid by the developer to the city under the proposal. The money would be put toward affordable housing in Kitchissippi ward and improvements to Parkdale Park and Parkdale Market.

Council reps for Kanata helped convince the committee to punt a decision to a later date.

It was Kanata South Coun. Allan Hubley who spoke up with the idea to defer the decision because he didn’t consider it to be a finished proposal.

It was a “roll of the dice” as to whether the application would be approved by the committee and deferring the file would avoid immediately sending the developer back to square one, Hubley said.

“This is beyond what could be expected that would be reasonable,” Curry said.

“Edge” creep was part of a lengthy debate on another rezoning application in Hintonburg, this time on Bayswater Avenue, south of Somerset Street.

The project by Centennial Development Corp. would replace three homes at 54, 56 and 60 Bayswater Ave. with a six-storey apartment building containing 40 units. It’s a short walk to Bayview Station.

Leiper and the community association drew the committee’s attention to the creep of taller buildings into the low-rise neighbourhood to the south.

Leiper fought to add one more metre to a side yard setback to give some breathing room between the proposed building and neighbouring homes, but developer consultant Murray Chown said even a single metre would reduce the number of larger units in the new building.

The city has been keen on receiving development applications for intensification projects that include larger units for families.

Alan Cliff, who lives in the area, urged the committee to endorse the development proposal.

Hardly ever does the committee hear from regular citizens who speak up in favour of a rezoning project, but Cliff said the Bayswater Avenue proposal checks the city’s boxes when it comes to the housing and climate change emergencies.

He acknowledged there would be some neighbourhood impacts from building shadowing and increased traffic, but “if that’s the price we have to pay, we should take that deal every day of the week.”

ALSO IN THE NEWS: