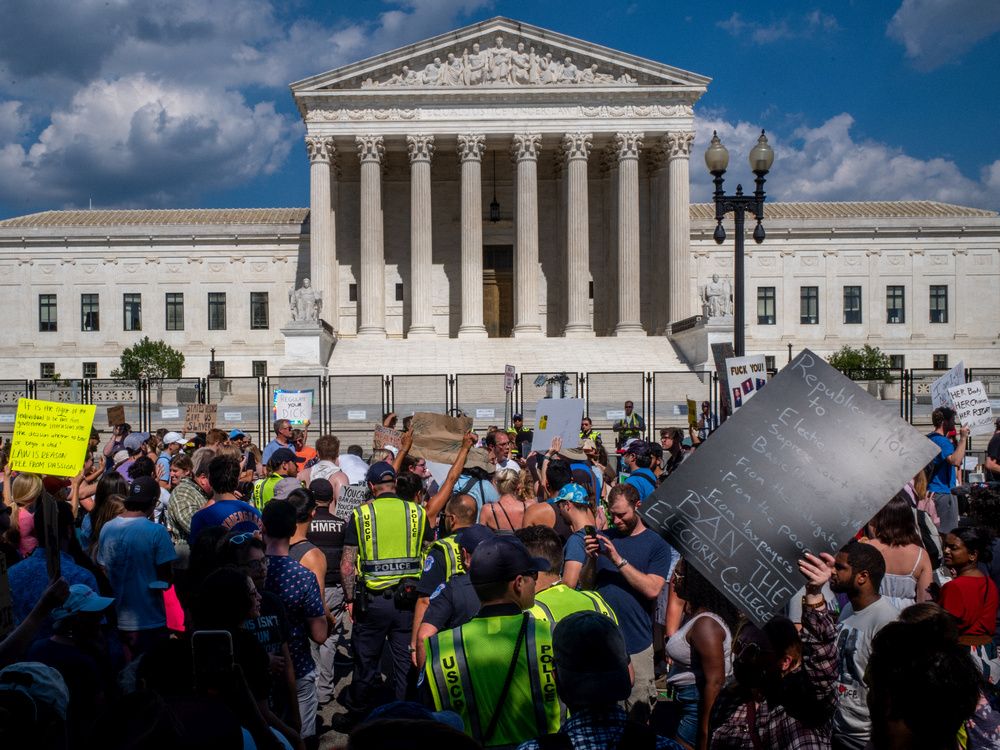 The angry protests south — and north — of the Canada-U. S. border reveal one thing: Canadians and Americans both expect far too much from courts and far too little from their elected representatives.

The protests were precipitated by last week’s Supreme Court of the United States decision Dobbs v. Jackson Women’s Health Organization, which ended the reproductive freedom women had enjoyed for the half century since Roe v. Wade.

Anger with the court is understandable, given the rare rescission of a Constitutional right and the duplicitous nature of recent appointees’ testimony before the Senate Judiciary Committee. One by one each affirmed their solemn commitment to precedent, only to later reveal that, whaddayaknow, the Roe precedent isn’t quite as sacrosanct to them as they led everyone to believe.

The Dobbs decision therefore told state legislatures that they can pass laws restricting women’s control over their bodies, but it took those legislatures to do it. The anger toward the court consequently seems a little misplaced, as legislatures — and legislators — ought to bear the brunt of pro-choice activists’ outrage.

It was, in fact, Roe v. Wade that increased many people’s expectations of courts while simultaneously decreasing their expectations of their elected representatives. Prior to Roe, a strong pro-choice movement focused its attention on legislatures rather than just on the courts, but that movement all but evaporated after the decision was released.

In many states, Democrats didn’t — and still don’t — even bother to contest elections, leaving Republicans to run for state offices unopposed. Evidently there’s no need to fight a war you’ve already won.

On the other hand, Roe’s thoroughgoing approval of abortion rights galvanized the pro-life movement, which set its sights on capturing state legislatures — the very legislatures that are now telling American women what they can do with their bodies.

It was none other than the late U.S. Supreme Court Justice Ruth Bader Ginsburg who made this point in a speech at New York University Law School in 1993, several months before her confirmation hearing for a seat on the top court.

Although Ginsburg took the unprecedented step of explicitly expressing her support for abortion rights at her hearing, her criticism of Roe v. Wade did create some uncertainty about exactly where she stood.

She nonetheless repeated that criticism in a speech 20 years later at the University of Chicago, stating that Roe “seemed to have stopped the momentum for change,” and that she “would’ve preferred that abortion rights be secured more gradually, in a process that included state legislatures and the courts.”

Indeed, had pro-choice activists continued courting legislatures, the Dobbs decision could have had a very different impact. In Dobbs, the court rejected Roe’s conclusion that the U.S. Constitution includes an unenumerated right to privacy, and it therefore held that states can make laws banning abortion.

Many predominantly Republican states have now already implemented a ban. But abortion remains legal in deep red Montana — specifically because the state Constitution explicitly protects the right to privacy. That right is now under attack, but the Montana case demonstrates that rights secured through state legislatures can withstand even the mighty decisions of the Supreme Court.

That ought to be a lesson not just for Americans, but for Canadians as well. Courts play an important role in ensuring laws don’t violate the Constitution, but the Constitution, like every other statute, is an act of a legislature.

If we really care about rights, then, appealing to the courts will never be enough. Although many people have lost faith in politicians and the political process, we can’t, as pro-choice Americans are now learning the hard way, demand the courts always come running to our rescue.

But we can demand that of elected representatives. And we ought to.