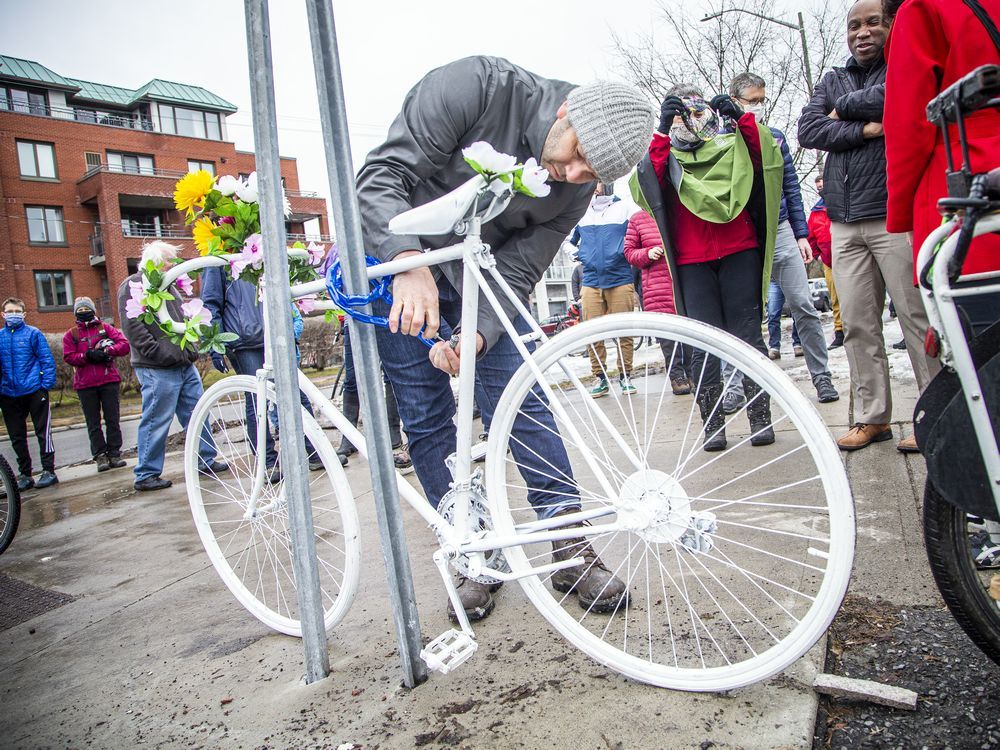 Spring hadn’t even made its official entrance yet and already we had a dead cyclist in Ottawa. A 43-year-old woman was struck by a snow grader just before 5 p.m. on a recent afternoon. Her death is a direct consequence of our longstanding choice to favour driver convenience at the expense of pedestrian and cyclist safety.

We think fluorescent green paint magically keeps people safe. It doesn’t. We need to change our ways. It’s a matter of life and death. The best time to invest the small sums necessary to make pathways and connections safe for active road users was 20 years ago. The next best time is right now.

As I write these lines, the identity of the victim has not been revealed. And neither have the exact circumstances of the events that led to her death. According to witnesses, it appears the operator of a vehicle making a turn never saw her at the intersection.

Given the time of day, perhaps she was on her way home, with plans for dinner or maybe thinking about the weekend. Plans that involved family and friends who will miss her forever. Alive, she could have been any one of us. In death, she is all of us.

The ghost bike at the intersection of North River Road and Donald Street will scream with its white frame and plastic flowers the life that was brutally cut short, the years that should have been lived but never will be. It will also be a visual reminder that we need to do better to protect the lives of active road users.

That particular intersection — like so many others in Ottawa — is known to be especially dangerous for pedestrians and cyclists. All it has is a four-way stop. No protected crossing for non-motorists, despite the fact that it’s routinely used by throngs of people on their way to or from the bike paths and Adawe Crossing Bridge connecting Sandy Hill with Overbrook and Vanier.

“We have definitely identified the challenges on North River Road and we’ve been working on those challenges, since I’ve come to office, with residents,” said Rideau-Rockcliffe Coun. Rawlson King, who was elected in 2019. I don’t doubt his intentions. But they are not enough.

Problems at that intersection, other than the four-way stop, include excessive speeds, heavy vehicular traffic and drivers behaving dangerously. Not that you need drivers to behave dangerously, given the state of our infrastructure. A moment of distraction, caused by a child in the backseat or a notification ping on your phone, can be enough to cause a crash that stops a human heart from beating.

The problem is how our roads are designed: to maximize motorists’ comfort and convenience and nothing else. This is what needs changing. We have people on staff who know how. And it’s not even expensive.

The gold standard is fully segregated lanes. But that takes time to implement. Immediate measures include flex stakes and lots of them, protected and elevated crossings, reduced speed limits, automatic speed enforcement (cameras) and speed bumps. In some places, closing a portion of a road to motor vehicles might be the most effective option.

Somerset councillor and mayoral candidate Catherine McKenney said on Twitter that we could, for very few dollars, make our streets safer to walk, bike and — yes — drive. “Instead we invest 100s of millions in widening roads that make everything more precarious for you & your kids. Remember this: budgets = priorities.”

Where we spend money tells us what we care about. Let’s get that bike and pedestrian infrastructure in now, and stop pretending that paint keeps people safe. It’s a matter of life and death.

Brigitte Pellerin is an Ottawa writer.