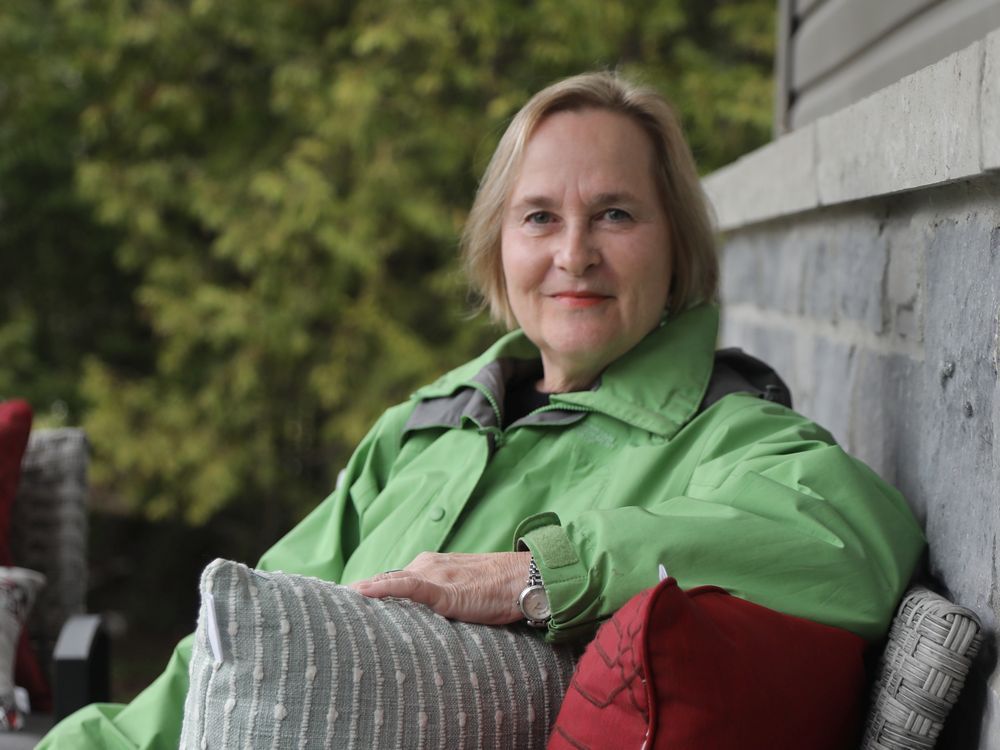 Call it organic, call it word-of-mouth, call it grassroots. Peggy Blair’s stint as a “matchmaker” for Ukrainian asylum seekers and host families started small and has spread its tendrils far and wide.

Blair is a legal expert on Indigenous issues, the author of the Inspector Ramirez mystery novels and a realtor. She had worked as an election observer in the 2004 Orange Revolution presidential election in Ukraine and was feeling shocked and powerless as the war unfolded.

A few weeks ago, she mused on Twitter that she had space for some asylum seekers in her home west of Ottawa, but no idea how to find candidates. Then she added her email address.

The message found its way to a young Ukrainian woman named Sasha who had fled to Warsaw with her mother and was looking for a host family in a city with a large Ukrainian population. Through her network, Blair found a host in Edmonton.

The email continued to make the rounds. Soon Blair was building a database of volunteer hosts and matching them with Ukrainians looking for a place to stay. She started out by placing asylum seekers in other Canadian cities, but there have recently been requests both from Ukrainians and hosts for Ottawa placements.

“It’s match-making. You have to fit in a whole bunch of variables. Languages spoken, expectations on both sides,” said Blair. “I always want to ring a bell when I place a family.”

In one case, a grandmother and granddaughter were looking for a host family. They don’t speak English or French — but do speak Italian.

Blair found a potential Italian-speaking match, but the family had to back out after learning that the pair were bringing a dog because their children have allergies. Blair is back on the hunt for another Italian-speaking host.

Social media has made the job easier. When one Ukrainian family found a Barrhaven townhouse for rent, it took only days to crowd-source donations to furnish it, from a dining room set to a fridge full of food.

“I’m like an air traffic controller,” said Blair. “When I got on social media and say ‘I need X,Y and Z,’ I get it. When I get one problem solved, it’s on to the next problem.”

Many of the asylum seekers have lacked the money for a flight to Canada. The cost from Warsaw is about $650, but the average monthly salary in Ukraine is about $800, said Blair. Many of those who want to come to Canada can’t afford rent until they can find jobs.

The Canadian government’s approach has streamlined things. The Canada-Ukraine authorization for emergency travel is aimed at allowing Ukrainians and their family members come to Canada as quickly as possible, with permission to work and study while they are here.

The accelerated temporary residence program has allowed Blair to be “quicker and more nimble, she said. Because the Ukrainians are not legally classified as refugees, they don’t require sponsorship. Instead of looking for apartments, which are expensive and require references, they can start out with a host family.

On the other hand, while refugees have their health care covered, this is not currently true of the Ukrainians — although some provinces have announced they will be making an exception. Earlier this month, Ontario Premier Doug Ford said an estimated 40,000 Ukrainians are expected to arrive in Ontario and they will get immediate coverage under OHIP.

Some of Blair’s hosts are Canadians of Ukrainian descent. “Some are just people who have been horrified at what they are seeing,” she Blair, who is approached by new Ukrainian families every few days and has about 40 potential hosts in her database.

“I feel compelled to do it. Because it’s the only thing I can do.”

Anastasiia Korol, an 18-year-old fashion design student and artist, and her mother Ludmila, 40, are currently still in their hometown of Kyiv. They contacted Blair after hearing about her through a source in Poland. Blair has already matched them with a host in Orléans with connections to the arts scene.

Anastasiiia said she spent the first three days of the war in shock.

“I didn’t see the point in anything. I didn’t want to draw. But I pulled myself together and finally picked up my pencils. I tried to sell my art in Ukraine, but our people have a crisis now and can’t buy any products that they don’t need.”

For now, Kyiv is safe, but there are always sirens and the fear of bombardment, she said. The Korols hope to set out soon for Warsaw by train and then to Canada after they receive their security clearances.

“It’s not difficult to get a train, because there are not as many people as in the beginning. We have a website where we can buy tickets, however these tickets run out quickly,” she said.

Blair was looking to match three young women, a group of friends who recently graduated from law school. Bruce May, a retired military lawyer and Sandra West, a retired military physician, have agreed host two of three. The couple’s daughters no longer live at home, and they had two spare bedrooms. Their friends Tom and Nicolette Kovesi, who live minutes away, will host the third woman.

“They are adults starting out their lives,” said West. “In December, they were living their own lives in their own country. They had their future taken away from them.”

Mayo and West had a Zoom meeting with their three guests last Saturday. Two of the women are now in Germany, while the third is in Tbilisi, Georgia. If all goes according to expectations, they will be in Ottawa by early May.

Mayo and and West say they both grew up understanding the threat of a Russian invasion. Bruce was stationed in Lahr, Germany, from 1978 to 1982 and his father was in the air force. West served in Afghanistan.

“This is what we talked about all those years. The Soviet Union fell, but Russia just continued,”  said Mayo.

“We’re concerned for these people,” said Tom Kovesi. “Not only is it incredible expensive here, but we don’t know if things will sort themselves out in a month or a year.”

Kovesi, a pediatric respirologist at CHEO, said the call for hosts reminded him of stories he heard from his parents Joseph and Vera, Hungarian refugees who arrived in Ottawa in 1956 before he was born.

When the Hungarian refugees arrived at CFB Uplands late in December and were invited to Christmas dinner at the officer’s mess. “There was a pyramid of oranges. My mother had not seen an orange since pre-war Hungary,” said Kovesi. “She asked if she could have one, and she was told she could have them all.”

A call went out for hosts for the new arrivals. The senior Kovesis would later recall a line of car lights as far as the eye could see, all volunteer hosts. Nicolette Kovesi’s mother, who was also a Hungarian refugee, was housed with a mother with a newborn baby from the Netherlands who welcomed the newcomer to her one-bedroom apartment.

“People were unbelievably generous,” said Kovesi. His parents lived in a series of apartments in the ByWard Market and bought their own home in Alta Vista in 1965. His father owned Rudy’s Tailoring on Bank Street, which became a hub for immigrants.

“We have space for someone. We really feel that it’s time to pay back.”

As for Blair, some of the success she has had in making connections is because of the Twitter followers she gained during the “Freedom Convoy” over a series of parody tweets called “Dearest Martha.” (A popular example post: “Dearest Martha, We lost the bouncy castles and hot tub yesterday to enemy forces. We used our shovels to build a mighty snow wall to hold back the intruders, but I fear they have a snow blower. Pray for us.”)

Blair had only a few thousand followers on Twitter before convoy, but that increased to 12,000 afterwards. That has helped to spread the word.

A colleague in Kingston has contacted Blair in the hopes of starting a similar project. Blair hopes others will take the template and run with it.

“I didn’t know anything when I started. Once they get it rolling, they can handle it. The heavy lifting is in the beginning,” said Blair, who posts what she has learned on her real estate blog, Kiss and Sell. “I don’t mind being the pivot point at the centre.”

Between Jan. 1 and April 3, almost 14,000 Ukrainian citizens have arrived in Canada, according to Immigration, Refugees and Citizenship Canada figures.

Almost 120,000 applications were received for the temporary residency program and 31,895 were approved between March 17 and April 6. More announcements are expected soon, including charter flights for those waiting to come to Canada.

A spokeswoman for IRCC said it’s impossible to say how many Ukrainians will arrive and when. “There is no limit to the number of visas or work or study permits that IRCC can issue,” she said.

Blair expects it will be late spring before large numbers start arriving. Hosts have to understand that it may be a long time before they are able to return home, she said.

“I don’t know when the people are arriving and how long they will remain. They won’t be settled in 30 days. This is an expensive country.”

Temporary residents may be able to apply for permanent residency through various programs if they decide to stay in Canada, according to IRCC.

Anastasiia Korol wants to create her own business in fashion. She believes Canada is a good place for creative people and is thinking about staying here if it works out.

“After the war, Ukraine will have a very bad economic situation, unfortunately.”