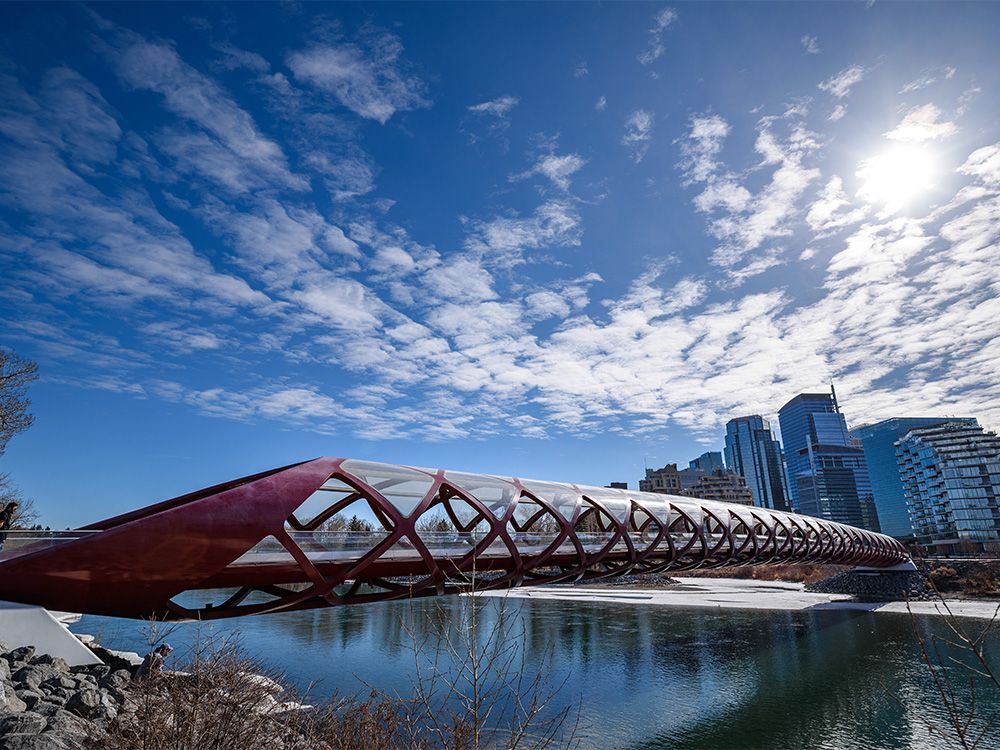 Moving across the Peace Bridge on March 24, 2012, was a nearly impossible task, as thousands packed onto the bridge to celebrate the controversial span’s long-anticipated opening.

“The estimate from the police service that day was five to seven thousand people showed up for the opening,” recalled Druh Farrell, the area city councillor at the time.

“Now I can’t imagine that part of the river without it.”

The Peace Bridge didn’t receive a warm welcome from all that day, or in the months and years leading up to its opening. The $24.5-million project faced heavy criticism, with controversy trailing its hefty price tag, 17 months of delays and the sole-sourced contract awarded to Spanish architect Santiago Calatrava.

But now, 10 years after its opening, the striking red helix bridge connecting Sunnyside with Eau Claire across the Bow River has become an indelible icon for the city. Its image is synonymous with Calgary, appearing regularly in tourism materials, newscasts and international publications — not to mention countless photos of newlyweds and graduates.

One critic of the bridge who had his mind changed was then-mayor Naheed Nenshi, who told Postmedia on Wednesday that his concerns mainly centred around its location as well as the sole-sourcing of the project, something he still has a problem with. But on opening day, he called on Calgarians to attempt to move past the acrimonious debate surrounding the bridge.

“I was very confused by the whole thing . . . I wasn’t so sure that people would grow to love this kind of out-of-place red thing, such a strange shape of the bridge, not traditionally inspiring,’” Nenshi said. “And I’m absolutely thrilled as to how wrong I was.”

In the lead-up to the bridge’s opening, city officials boasted it would see 5,000 daily crossings, but many, including Nenshi, cast doubt on whether that number would be achieved. The span saw more than 6,000 daily crossings that very spring.

The bridge continues to see high use, though crossings declined with the onset of the COVID-19 pandemic. In 2021, 1.8 million pedestrians and cyclists crossed the Peace Bridge, or about 4,950 daily, a 41 per cent decrease from 2019.

The Peace Bridge was a narrative-shifting project for Calgary, said city real estate developer Chris Ollenberger. It’s an investment he thinks has paid dividends for the city on the world stage.

“It’s interesting how much one piece of infrastructure can uplift and change people’s visions of what a city can be,” said Ollenberger, the former CEO of the Calgary Municipal Land Corp.

“I bet you we’ve probably got more value from being known around the globe as not just another Prairie city, but a city to be watched and a city to be moving forward, for $25 million bucks than we could ever pay for.”

The bridge was approved by council in September 2008 in a contentious 7-6 vote. Its name, decided the following year, was chosen as a military tribute but was criticized by some councillors as a cynical attempt to win over public opinion for the project.

Then-alderman Andre Chabot said his problem with the bridge at the time was with the process through which its contract was awarded to Calatrava, without a competitive bid that would consider local talent.

Chabot recognized the bridge as a unique, iconic design that has garnered significant positive attention for the city, but stood behind his original opposition.

“Ultimately, it was a good investment by the City of Calgary. I’m just not fond of the process it went through,” said Chabot, who also sits on the current city council.

“To this day, if there was a similar project they tried to push through using the same mechanism, I would likely vote the same way I did on this one, regardless of what it would look like or how it’s perceived 10 years from now.”

Ollenberger said he believes Calgarians would never have opted to green-light the Peace Bridge on their own, charging the political push headed by Farrell and former mayor Dave Bronconnier was necessary for the approval of the project.

Farrell said she views the bridge’s opening as a turning point for urban planning in Calgary. She cited the city’s flagship Central Library, opened in 2018, as one example of a project enabled by the philosophy of emphasizing art and design, a trend she said began with the Peace Bridge.

“This city deserves beautiful infrastructure,” Farrell said. “And I think if you ask the average person, they wouldn’t remember the controversy. They would just accept it as an iconic symbol of Calgary.”

When he has guests in town, Nenshi makes a point of taking them to the Peace Bridge, alongside other standout Calgary locales.

On Wednesday morning, a day before the Peace Bridge turns double-digits, three women shepherd a gaggle of young children over the bridge. About halfway across, the group stops.

“We’re on the bridge,” one of the women says to the children, who peer over the railing on tiptoes. “Look at the bridge. Look at the river. Isn’t it beautiful?”