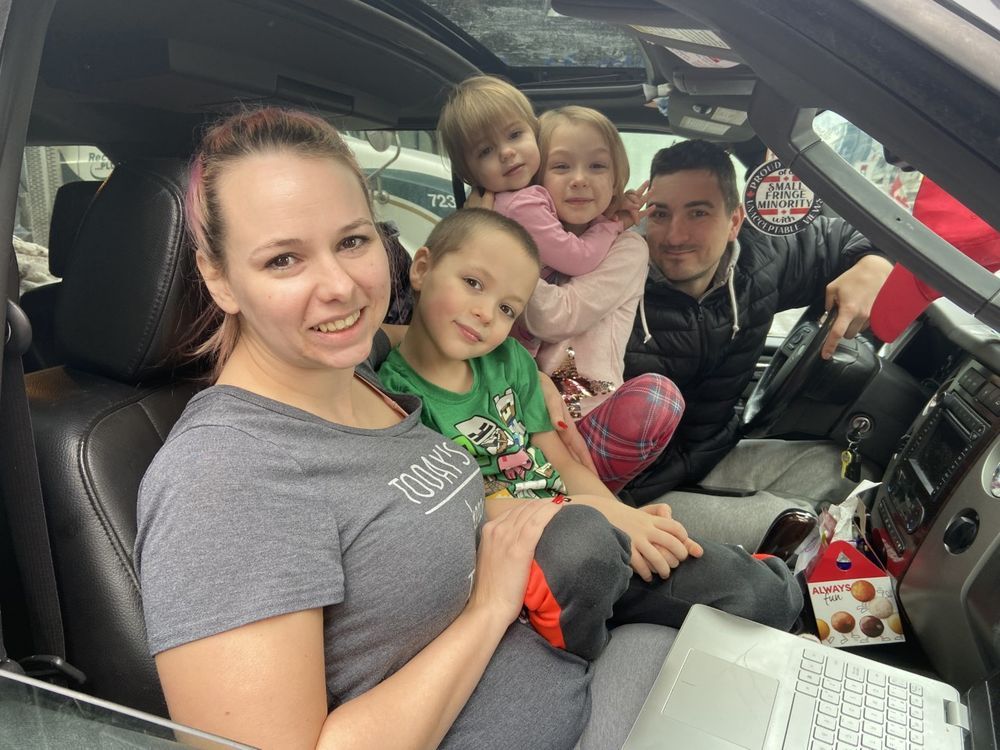 Truckers and supporters said Wednesday they are proud to have their children with them at the protests that have shut down parts of Ottawa for nearly two weeks, saying they are there for their children’s futures.

Even on a relatively quiet morning, children could be seen Wednesday amid the giant trucks that have been parked throughout downtown for 13 days — crawling through the makeshift playground set up on Wellington Street, walking through the crowds on Parliament Hill, being pulled in wagons and pushed in strollers. During the weekend, there were bouncy castles and games of street hockey.

“Our kids are living better than most kids. They call it glamping,” said Marc Kozlowski, who drove from Vernon, B.C., with his wife Danielle and their three children Ariana, 8, Emerson, 7, and Braylin, 2. The self-employed couple runs wine tours in the Okanagan Valley, a business that has been severely affected by COVID-19 lockdowns.

The family has been living in their Ford Expedition SUV while in Ottawa, but has been invited to homes to shower and do laundry. Kozlowski says he has no worries or safety concerns about his children.

“Not at all. They’re eating good, they’re getting exercise and sleeping well. I think they’re even going to bed earlier.”

This week, the Children’s Aid Society of Ottawa said it has received reports of welfare concerns about children and youth at the demonstration. About 100 trucks parked downtown as part of the protest contain children, Ottawa police said, something that complicates their response. Police say their officers on the scene will report any potential dangers they see to CASO.

The first week of protests was marked by the ear-splitting blare of horns at regular intervals — something that has driven some nearby residents out of their homes. Horns have now been largely silenced by an injunction after a court hearing which was told the sound from the trucks was at dangerous levels that could damage hearing.

Still, the smell of diesel fumes permeates the scene and containers which appear to be full of fuel are being brought into the protest “red zone” despite a growing police presence.

Other parents with children in the crowd — including those who have been living in trucks and trailers — also dismissed concerns raised by officials about their safety as “scare tactics.”

“There is no reason they can take away our children. We are not breaking any laws,” Rose Ravensburgen said from the cab of a truck parked on Wellington Street.

She, her husband and their three children, ages 14, 12 and 10, have been living in the truck since they arrived. She said she started homeschooling her children because of COVID and, while they are not as affected by vaccine mandates as others, they are there to support them.

“We are seeing the devastation it is having on other people. We are standing up for them. It will impact our children’s future.”

Yves Belanger of Hearst, Ont., about 900 kilometres northwest of Ottawa, has been at the protest since the beginning with his grown daughter, Amelie, and two-year-old granddaughter, Maliya. Belanger is an ice road trucker who said he lost his job with a mining company because of the vaccine mandates.

“They offered me a dream job. I told them I didn’t get vaccinated and they said everything was OK. Then they called me and said, ‘Oh, it just came up that we all need to get the shot.’ So I said, ‘It just came up that you can call me back when the shot’s over.’”

Belanger drove to Ottawa with Amelie and Maliya, parked his rig outside town and moved into an Airbnb.

Bundled up against the cold near Wellington Street on Wednesday morning, Belanger described the protest as a “love bubble.”

“I haven’t ever seen a place so happy, so organized,” he said. “I have work but I had to come here. I had to represent the Highway 11 people and Northern Ontario and have our freedom back. We want to be heard.”

He said he has no worries at all about his family’s safety.

“Look at that kid. She’s all smiling and happy,” he said as Maliya explored the sidewalk near the Supreme Court.

His daughter says the family’s living comfortably in Ottawa. Belanger says he’s doing his best to keep the demonstration peaceful and orderly.

He also says he has a new job offer waiting for him as soon as he returns to Hearst, whenever that might be.

Danny Beauregard, who drove from Quebec to join the protest, said the issues directly affected his children.

“I don’t want to raise my kids with a mask on their face or a QR code. I want to raise them like we were raised and I think it is important for them and for us to have no mandates.”

Behind him, in a trailer parked close to the central stairs leading to Centre Block, his 10-month old and three-year-old children were napping.

Beauregard says he had no safety concerns.

“I am not worried. It is 25 degrees inside our trailer. We have a shower every day or two. We eat four meals a day.” All day long, there are children nearby for his older daughter to play with, he said.

Marc Paul and Theodora, who asked that their last names not be used, walked toward Parliament Hill carrying their seven-month-old baby Wednesday.

The Ottawa couple says they both lost their jobs because of vaccine mandates.

“We think it is very unfair that we are being discriminated against. These truckers are doing something good for our children and us and I am going to stand by that.”

Shawn and Rob, a married couple who did not share their last names, are farmers from Manitoba and said their adult children stayed home to look after their farm so they could join the protest.

“If I had young kids, I would have them here because we are changing history. We are taking back our freedom,” Shawn said.