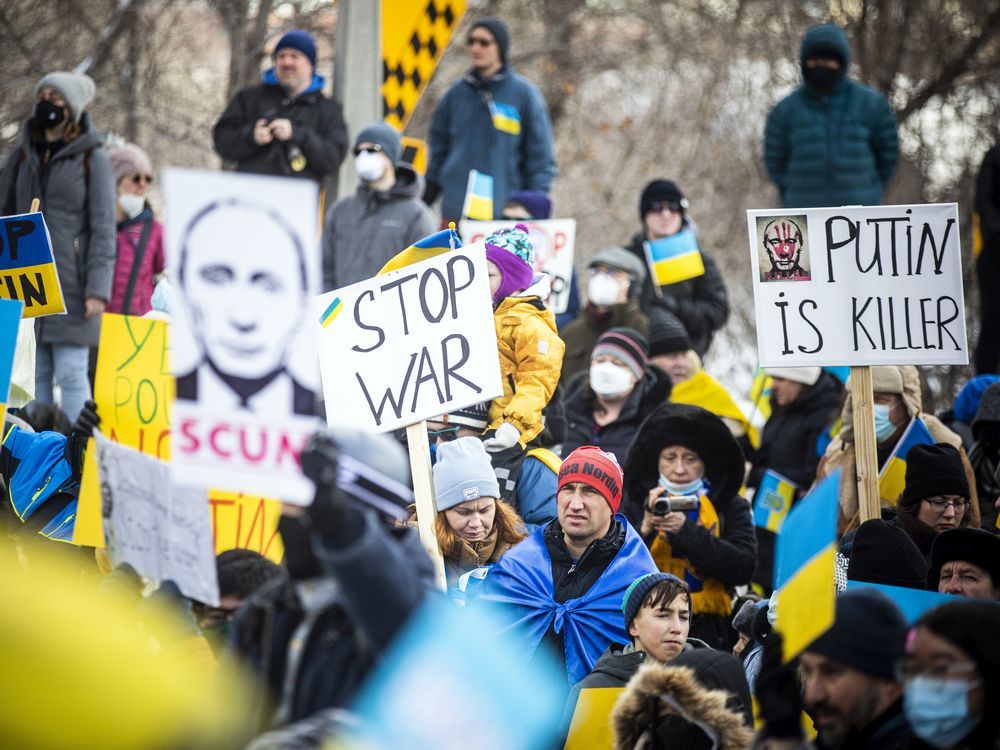 Hours after Russian forces pounded cities in Ukraine with a barrage of missiles, more than 1,000 Ukrainian Canadians and their supporters took to the streets in Ottawa.

Bearing yellow and blue Ukrainian flags and placards denouncing Russian President Vladimir Putin, they gathered at a rally in front of the Russian Embassy, then swept down Laurier Avenue to city hall.

Interim Conservative Leader Candice Bergen addressed the crowd, calling the attack on Ukraine “shocking”, but her words were drowned out by a chorus of shouts and boos.

Those in the crowd ranged from new immigrants to those whose families came from Ukraine generations ago. Even as Canada and other western allies have announced sanctions, many in Ottawa say they fear for the safety of family and friends at home, especially those from the capital city Kyiv, as Russian troops draw closer.

Some in the crowd have lived in Kyiv recently and say they know of people who have retreated to shelter underground, even root cellars. Armed civilians are helping to defend Kyiv, according to reports.

Konstatin Avramets and Maryna Skobal say they have friends who are holding weapons in the streets of Kyiv.

“That’s in our blood. Ukrainians, they will never give up because that’s how it works in our country,” said Avramets.

“We are worried about the future of Europe and the world. Now they threaten the world with nuclear weapons. Canada is also in danger,” he said.

“Canada is part of NATO. We understand that no one is going to participate in a war at this moment. But we trust that Canada can apply some pressure.”

Vasyl Myrutenko has lived in Canada for 10 years. He said his 70-year-old mother lives in a suburb of Kyiv. She has mobility problems, lives on the eighth floor of an apartment building and has no family nearby, except for a niece, he said.

His mother’s building has not been affected, but other buildings nearby have been damaged. She took refuge in a bunker on Saturday night, he said. And although he is usually in contact with her by cellphone, the connection has been poor, he said.

Miroslawa Bilaniuk came to Canada in 1979 from Poland, but her parents are ethnic Ukrainian, and she has a strong connection to the culture and is active in Ottawa’s Ukrainian community.

‘I have to tell you I haven’t slept well for the past three nights,” she said. “What has happened is absolutely unconscionable in the 21st century. So I couldn’t really do much of anything but show up.”

On Sunday, Canada and the European Union both announced that they are closing their airspace to Russian aircraft operators. Ukraine has asked for a military no-fly zone over its airspace, aimed at stopping Russian airstrikes.

Many at Sunday’s protest said they hoped it will happen.

“I am hoping they will do the no-fly zone so they will stop bombing our cities,” said one woman who has lived in Ottawa for 10 years, but declined to be identified.

She has a cousin in Kyiv. “She is in the shelter every night.”

The rally attracted some who have never been to Ukraine, but still feel it’s important to stand in solidarity.

“I grew up during the Cold War. It scares me and I think Russia has got to be stopped,” said Lise Mercier.

Mike Clark is an Air Force veteran and served during the Cold War.

“This is the Cold War echo. And it’s coming back. It scares the hell out of me,” he said.

“This is the kind of thing I served to prevent. And now, here it is.”