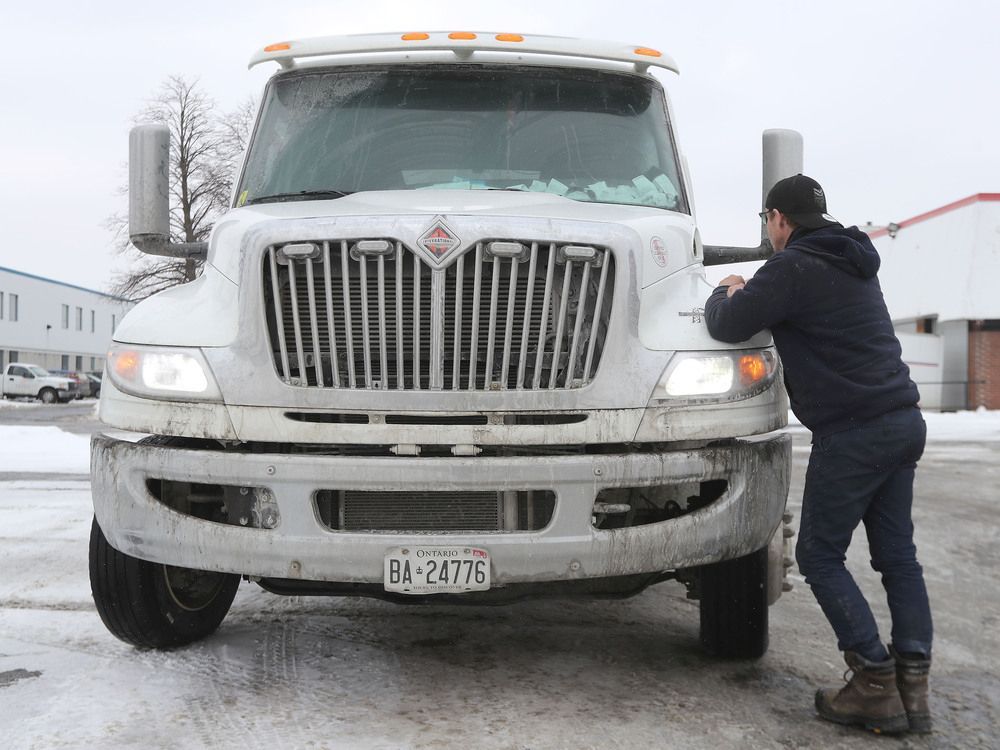 Randy May describes himself as a patriotic Canadian who supports the “Freedom Convoy,” calling it a “do-or-die” situation for truckers.

So when Pat King, one of the protest’s chief organizers, put out a plea on social media last Sunday asking for help moving the group’s Confederation Park staging area, May, a 48-year-old tow truck operator, answered the call. It was May’s Advanced Towing & Recovery rig that hauled away the wooden kitchen/cabin structure — a.k.a. Convoy Cookhouse, a contentious icon and reminder of the protestors’ possible permanence, — from Confederation Park to Coventry Road, another of the protestors’ staging areas.

The blowback May received was perhaps not surprising, given the heated partisanship and volatility surrounding what many are now calling an occupation. What did take him aback, though, was the sheer magnitude of the response, with hundreds of angry callers phoning and threatening him and his family, night and day.

Additionally, he says, the haters have come from both sides of the issue, with convoy supporters ganging up first when they thought he was moving the structure as part of a police effort, followed by the anti-convoy contingent when it became clear he supported the protest.

“It’s going sideways now,” May says. “I should never have done it, absolutely.”

May cites one of the organizers posting negative comments about his actions, as well as Ottawa police Chief Peter Sloly hailing the dismantling of the Confederation Park staging area as a win for police, as significantly tipping convoy supporters against him. May is also angry with King for failing to come to his support.

According to May, the structure was initially supposed to be moved to a location in Vars, but police told him en route to take it to the parking lot at the Ottawa stadium. Upon hearing that, May says the convoy organizer who was riding with him said, “Randy, if you do that, I’m going to wreck you and your company.”

“And when Ottawa police said that was a big win for them, it didn’t look good for me,” May admits. “That made me look like a s–t-bag, and protestors would look at that and call me a little f—er.

All 16 Photos for Gallery

“I understand where people were coming from, but I didn’t know that at the time.”

The phone calls began soon after, hundreds and hundreds of them. About 70 per cent of the death threats and complaints he could identify — many caller IDs weren’t displayed — were from the U.S. Many called him a sheep and a rat fink, telling him he deserved whatever came his way. One caller, May says, phoned him 22 times between 4:22 a.m. and about 8 a.m. on Monday. Meanwhile, only about 30 per cent of those wiling to hear his explanation subsequently offered any kind of apology.

“It was horrible,” May says. “I’m patriotic, I love Canadians, I love Americans.

“I couldn’t believe it; I was floored. I still can’t believe how they turned on me like that. Everyone who knows me knows I’m a stand-up guy; I’m anti-police, anti-government. Go look at my profile. I’ve done tow-truck protests, towing protests, I’ve done it all.”

But in trying to assuage his detractors, May caught the attention and ire of convoy opponents, who on Tuesday morning began to heap similar vitriol on him.

“They’re saying I’m a traitor to my country and unpatriotic, that I’m a loser and that I want to deal with the vermin downtown.”

Anti-protestors, he says, have called to say they hope he and his children get COVID, or have intimidated him by reciting his home address over the phone.

“I have every last person s—ting on me right now,” he says.

Meanwhile, many of his regular customers who don’t support the protest have called to voice their displeasure. “This has hurt business, absolutely.”

May adds he hasn’t slept in days, and feels he’s been “used all around. By Pat King, by police.”

And, while he doesn’t fear for his own safety, he worries about his family. But he won’t report the threats to police, lest he look like a “rat.”

“In my towing business, when you have a problem, you deal with it inside the organization. You don’t go to police, because that makes you look bad.

Instead, he plans on just rolling out and seeing what happens next. He still supports the convoy, but adds he’d like to give King a piece of his mind.

“I’d like to knock his f—ing teeth out, for not helping or throwing a lifeline.”