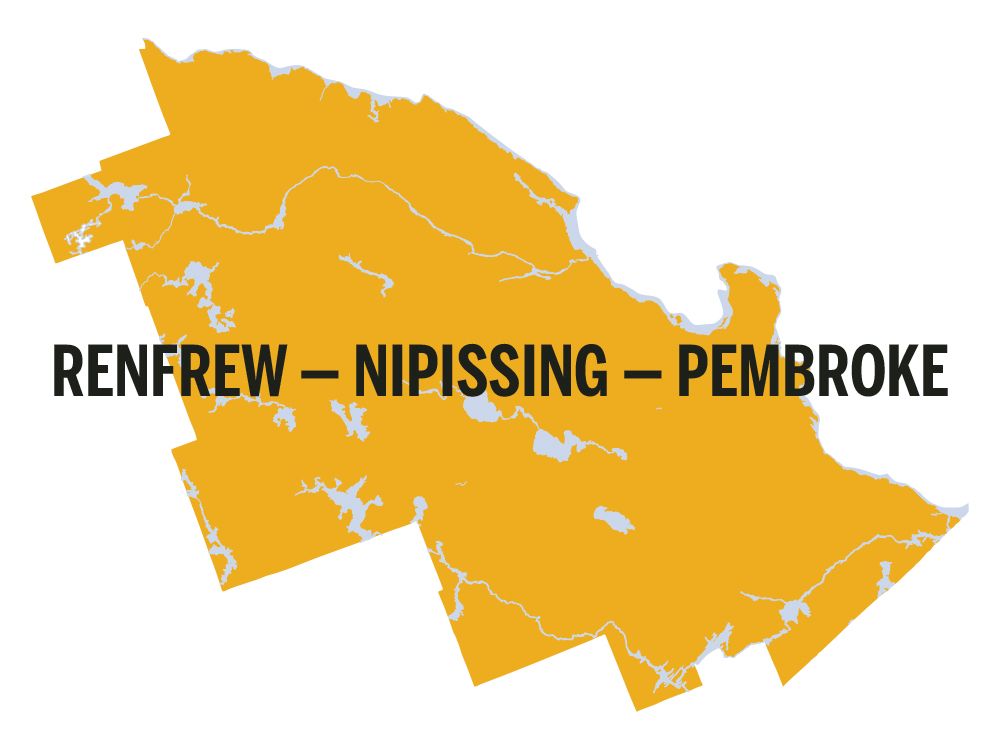 Where is Renfrew-Nipissing-Pembroke riding located?

This sprawling rural riding is northwest of Ottawa, with the northern boundary hugging the Ottawa River from Arnprior to Deep River and the western boundary reaching to Algonquin Provincial Park.

The riding has swaths of wilderness, farmland, small historic towns, cottage country on both lakes and rivers and the gorgeous Madawaska and Bonnechere valleys. The largest town is Pembroke, a former logging centre settled nearly two hundred years ago whose population has remained stable around 14,000 people for decades.

The central part of the riding is the heart of the Ottawa Valley, including the towns of Renfrew, Eganville and Barry’s Bay. Other towns in the riding include Cobden and Killaloe.

It’s a rural area, where 78 per cent of private dwellings are single, detached houses. Residents overwhelmingly speak English at home, and are slightly older than the provincial average — the median age in the riding was 45, compared to the provincial median age of 41.3, in 2016.

What is the recent electoral history of this riding?

Since then Yakabuski has hung onto the seat with no real competition. He clobbered the Liberal second-run candidates in 2007, 2011 and 2014.

Traditionally, voters in the area have elected both Liberals and Conservatives, and rewarded them with long political careers.

The current riding was created in 1999, and held in that election by Liberal Sean Conway, who had been MPP for the former Renfrew North riding for 24 years before that.

Who are the candidates running in the riding?

Yakabuski is hoping for his sixth consecutive election win. In his last term in office, Yakabuski served as Minister of Natural Resources and Forestry from 2018 to 2021.

He is currently a parliamentary assistant to Premier Doug Ford.

His roots in the riding run deep. Before going into politics, Yakabuski was a real estate representative and owned and operated a Home Hardware store in Barry’s Bay for 20 years.

The NDP candidate, Kurt Stall, grew up on a farm in Saskatchewan and has nearly 20 years of experience managing mining, agriculture and nuclear projects. He has a PhD in nuclear engineering, works in research and development and lives in Deep River.